Ladling Out Soup & Dreams at Ladles 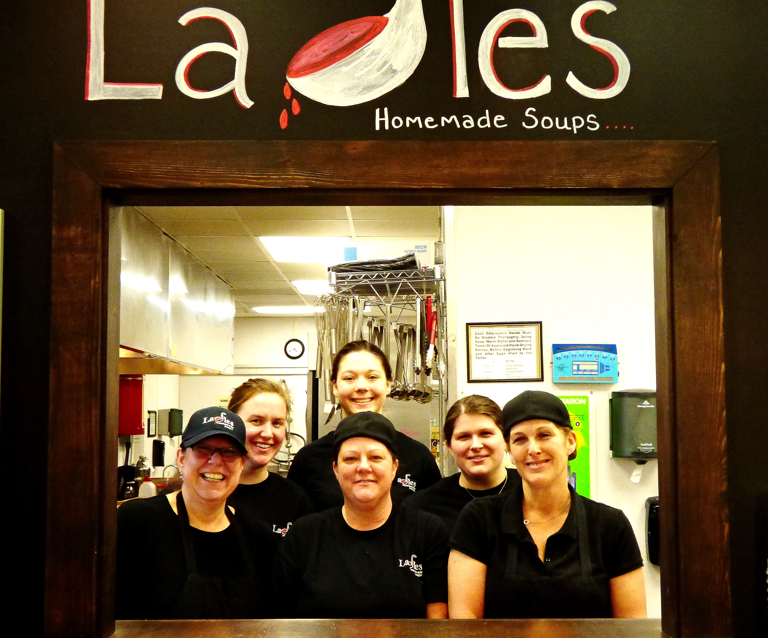 The Ladles crew takes a quick break for a photo shoot.

The concept behind Ladles, the soup and sandwich shop that just opened in Kill Devil Hills, is simple—homemade soup made fresh daily, all sandwiches and salads made to order and reasonable prices.

Judging by the lines at the register and the seats that seem to be filled at all times of the day, that simple concept has resonated with Outer Banks residents. “The concept is so cool,” Laurie Harvin, one of the owners says. “Everybody loves soup. It’s like a magical thing that happens here.”

The restaurant opened in December, just two months ago. For most Outer Banks businesses that would be the kiss of death—a five or six month struggle, waiting for the summer vacationers to arrive. For Vicky Katona, the other owner, and Laurie, cold weather and homemade soup seems to the perfect match.

The partners met cleaning rooms and doctor’s offices at the Outer Banks Hospital. They had a dream that they would do something that had real meaning and working in housekeeping at the hospital was not what they had in mind.

Migrating from Michigan two years ago, Vicky had been a 911 operator and fireman before coming to the Outer Banks. “A lot of things had changed in my life,” Vicky says. “I always equated it, that I knew we had to do something meaningful with our lives.”

Laurie, who had been on the Outer Banks for almost 20 years was looking for a new direction as well. “Vicky, with her vision wanting . . . to get into something else,” she said explaining why she knew Vicky would be the perfect partner. “She could match me cleaning. I’ve been cleaning forever and this girl could keep up with me. What better partner than someone who can work identical to you and have the same values and principals.”

They were an unlikely pair to open a restaurant together—neither one had worked in food service before. “I have been everything but a chef,” Vicky says. But six weeks of training in Charleston, South Carolina where the headquarters of the Ladles franchise operation is located, had them ready to go when they opened their doors.

Vicky creates the soups from scratch every day and she has picked up some important skills along the way. “I never had any kind of knife skills but I have been honing them,” she says. “I’ve gotten much better. You cut everything fresh everyday. You learn fast.”

With business so strong during the winter, a question arises about the summer. The partners were a little surprised at how strong business was as soon as they opened. “I wasn’t (expecting it to be this busy),” Vicky admits.

“But Suzy was,” Laurie says, referring to Ladles founder and CEO, Suzie Allen.  “They felt that with the amount of people within three miles of the location, we would be one of the busiest Ladles.”

Even with summer looming, Laurie is more concerned with how well they handle the customers they see every day. “We’re really here for the community,” she says. “This is a local’s place. When summer comes, we’ll know then.”

Ladles is located at 1901 S. Croatan Highway in Kill Devil Hills. They are open 11-7 Monday through Saturday.