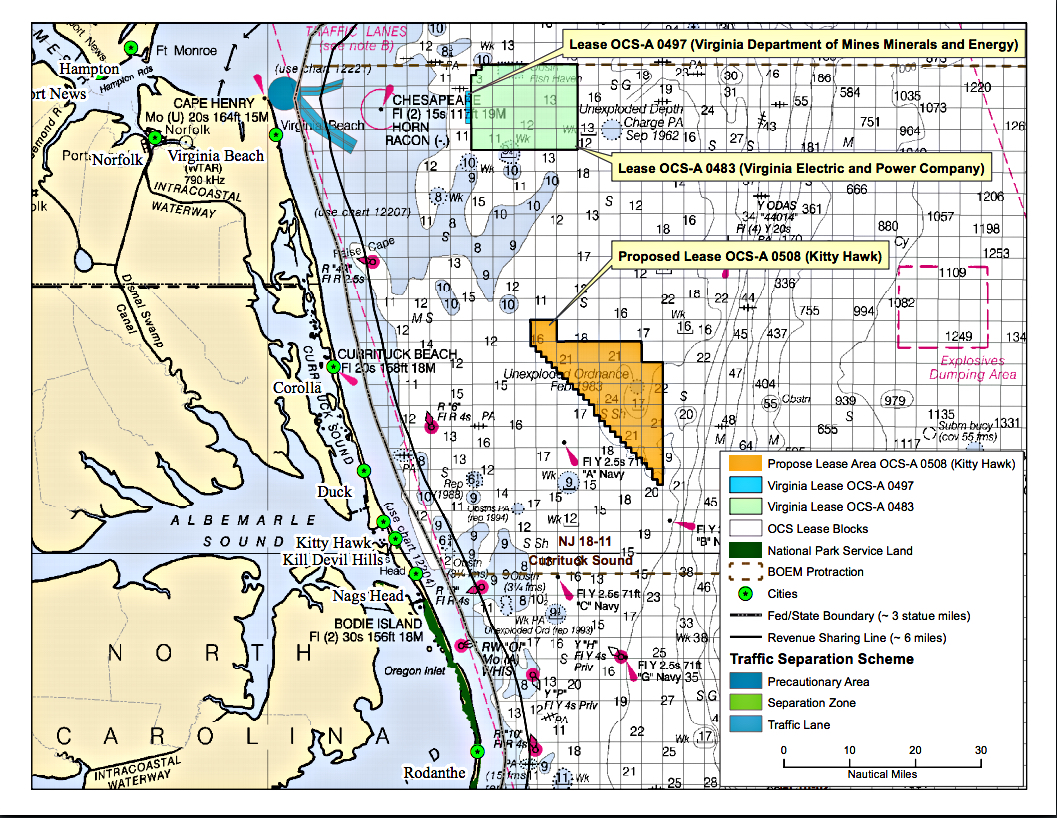 At an informational meeting held at Jennette’s Pier Wednesday night, the Bureau of Ocean Energy Management (BOEM) explained the next steps in developing the wind energy of the Atlantic Ocean.

Five years after the first indication that the sea off the northern Outer Banks was being considered for wind energy development, the beginning of the end of the process may be at hand. “We’re at a very important pivot in the process here,” Bennett Brooks of the Consensus Building Institute said in his opening remarks at

The Kitty Hawk Wind Energy Area (WEA) consists of 122,405 acres of what is considered by many to be the crown jewel of the federal government’s offshore energy program.

Beyond the three mile zone of waters falling under state jurisdiction, the federal government controls how energy resources are developed in the ocean. The process begins with identifying potential resource areas, analyzing the area for environmental, transportation and military impacts and soliciting public input. At the end of the process, an area is identified for the sale of leases to develop energy.

The Kitty Hawk WEA has now reached the point that BOEM is ready to accept bids on the leases.

For the Kitty Hawk WEA, BOEM is planning on selling one lease agreement for the entire area. “It is a proposed notice of a sale of a single lease of 122,000 acres,” Jim Bennett, Chief for the Office of Renewable Energy Programs for BOEM, said.

The announcement of who BOEM has accepted to purchase the lease will not be made until January or February of next year.

The potential for the Kitty Hawk WEA was underscored by the range of visitors in the audience for the presentation. Pierre Warlop had come from France representing, WPD Offshore France, one of the largest developers of offshore wind energy in Europe.

“We’re looking to the US,” he said, explaining that the United States offshore wind energy has only just begun to be exploited.

“The US market is very different than Europe,” he went on to say, noting that the US market had the unique ability to store excess energy and sell it as needed—an attribute that makes the domestic market attractive to investors.

Any development of the Kitty Hawk WEA is a number of year in the future. Even after a lease is awarded, there is a two year period of onsite assessment of the wind resource, followed by a series of environmental impact statement before construction can begin.

Located 24 miles off the northern Outer Banks, the Kitty Hawk WEA will be an engineering challenge to develop; located in waters 20-45 meters in depth, construction will be difficult and bringing the energy to shore will be extremely expensive. However, the consensus among engineers is that the longterm potential outweighs the short term concerns.