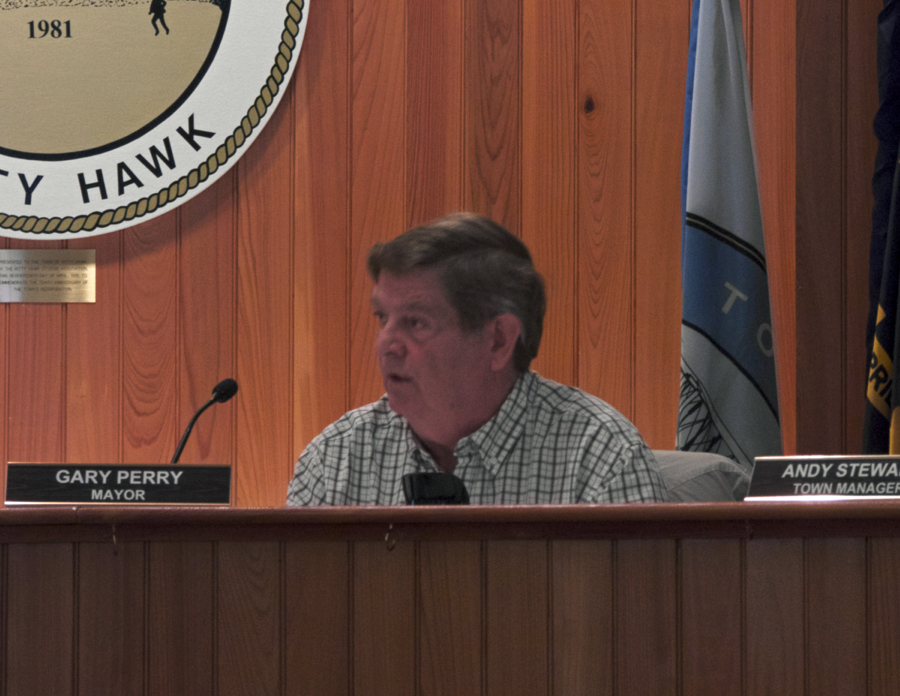 A troubled and divided Kitty Hawk Town Council voted 4 to 1 to continue to participate in the Dare County Intralocal beach nourishment project after bids on the venture came in higher than forecast.

The project will be put out for rebid.

Mayor Gary Perry, the lone vote against continuing the program. voiced concerns about legal costs, cost overruns and the longterm implications for the town of Kitty Hawk.

“If you commit today to the rebidding process, then once that bid comes in and is accepted, then you’re in,” he said. “Whatever comes after that is ours. That includes any lawsuits. It deals with any shortfalls that we might have to deal with.”

Although the council did not vote with the mayor to withdraw from the intralocal agreement, members expressed concerns about the process and the uncertainties going forward.

“The risk of doing absolutely nothing, I can pretty much see what’s going to happen,” Councilman Jeff Pruitt said. “We’ve witnessed that twice in less than two months. We don’t have very much beach left, it’s pretty much at the road now. The risks are high, but the risk of doing nothing is even higher.”

The legal challenges that Kitty Hawk may face are unique among Duck, Kill Devil Hills and Dare County, the other members of the intralocal group funding beach nourishment. With over 35 beachfront property owners who have not signed easements allowing the nourishment workers access to their property, the town faces the possibility of prolonged litigation.

However, other members of the group do not share Perry’s concern that the project cannot be funded as it now stands.

Chris Layton, Town Manager of Duck, points out that much of the problem with the bid was attributable to scheduling conflict for the dredge companies. “There’s a lot of work on the lower Mississippi right now,” he said. “It was very clear from the bids that to start work now they would have to shift a lot of resources.”

By moving the start date to after the summer, the work load should be lower and bids should reflect that. “We fully expect prices will be lower,” Layton said.

He also noted that the size of the project would attract bidders to resubmit offers.

Under any circumstances, the county and its partners will be in a better financial position to pay for the project after another summer season—a point that had widespread agreement.