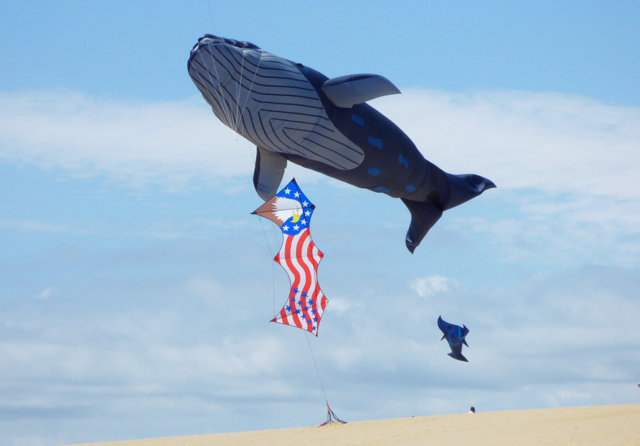 If third time is the charm, the 33rd Annual Kitty Hawk Kites Rogallo Kite Festival must be charmed indeed.

A celebration of kite flying and the many types of kites there are to fly, the three day event at Jockey’s Ridge State Park in Nags Head battled some iffy flying weather on Friday and Sunday but still managed to paint the sky with kites of every description.

Gigantic fish, a huge yellow squid, a giant panda and delta and parafoil with decorations running up their lines filled the horizon at the top of the dune. The most spectacular kite, though, had to be the life sized blue whale that danced in the wind. 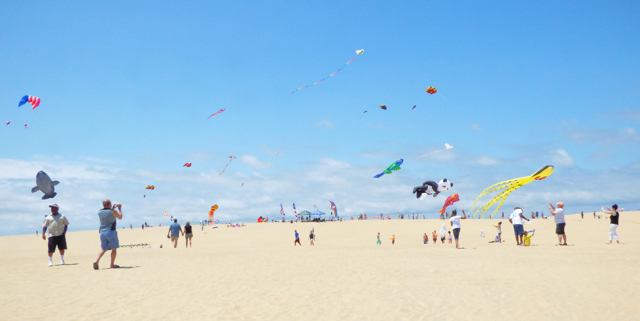 A great turnout on Saturday for the Rogallo Kite Festival.

Saturday was a perfect day for kite flying, and if there is a better place anywhere to fly a kite than Jockey’s Ridge, it would be hard to find. With a steady 8-10 mph wind from the north, bright sunshine and moderate temperatures, the park was filled with spectators admiring the show.

Conditions were also perfect for stunt kite flying and Kitty Hawk Kites kite buyer, Rachel Sanchez, along with a representative from Prism Kites was on hand to give instruction to anyone who wanted to try flying a two-line kite.

The stunt kite that was flying was the Prism Quantum, a very good kite for a beginner, but responsive enough that even more experienced flyers will continue to enjoy it. There was a 100’ tail attached to the kite which slowed down its performance making it a little bit soft to the touch, but seeing that tail curling around through the air was a thing of beauty.

A little bit beyond where the Quantum was flying, Bob Lauder from the Washington, DC kite club, Wings Over Washington, was teaching people how to fly a quad line kite.

“Have you ever flown a two line kite?” was his first training question.

“Well, forget everything you know,” he said. And he was right.

Surprisingly easy to fly, the American flag kite that Bob had constructed himself reacted quickly and predictably to maneuvers, although it did take some getting use to. A quick note from a dual-line kite flyer—it was particularly nice to be able to land the kite directly into the wind. 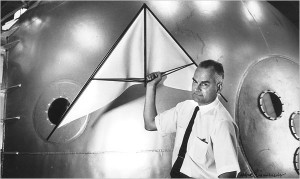 Francis Rogallo posing with a mock-up of an early hang glider.

The Rogallo Kite Festival is in memory of Francis Rogallo who is considered the father of hang gliding.

A NASA scientist, he invented a steerable, flexible wing that did not require a frame in 1948. As all-American a story as there could be, he invented his wing sitting around the kitchen table with his wife, Gertrude. The importance of his invention can be seen everywhere in everyday life.

As a person, Mr. Rogallo who resided in Southern Shores, was a kind, very patient man, who seemed to genuinely enjoy talking to people about almost any subject. He passed away in 2009 at the age of 97.

He never made any money from the patent on his Rogallo Wing, giving his patent to the US government so it could be more widely shared. In addition to the patent of his flexible wing, Mr. Rogallo also held patents on the lateral control of aircraft and jet aircraft design.