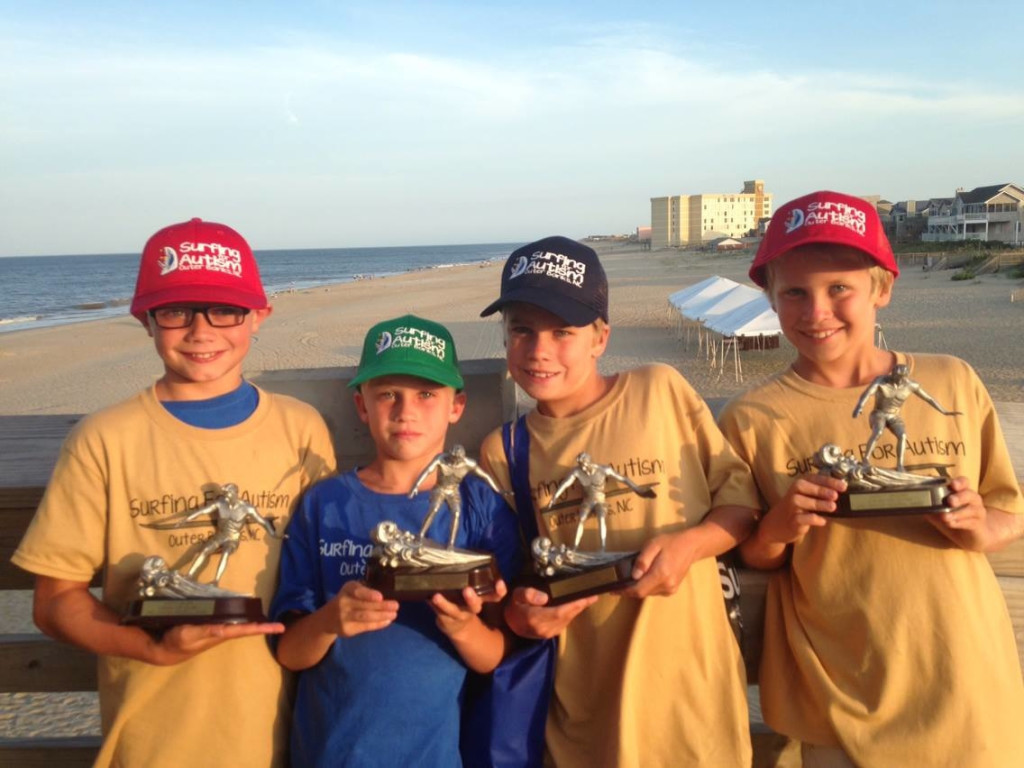 Driven by their passion for surfing and a strong desire to give back to the community, four local children have raised thousands of dollars to support Surfing for Autism, an autism awareness event held on the Outer Banks each summer. The popular event provides participating children with the opportunity to experience the therapeutic benefits of surfing in a safe environment. Brothers Matty and Mason Miller, along with friends Barritt and Logan Grizzard, turned what could have been a lucrative roadside snow cone stand into an ongoing effort to help an organization that shares something close to their hearts with children with special needs.

“They almost instantly decided they wanted to raise money for Surfing for Autism,” says mom Emily Miller.“They all agreed that because they love surfing so much, they wanted to help this cause so that others might have an opportunity to participate in an activity they view as ‘the best thing ever.’”Their fundraising efforts began with a small snow cone machine and some ice on a hot summer day in 2012 in front of the Millers’ Colington Harbour home. The four friends had immediate success. “You would not believe the people who would just drive by and hand out $5, $10, $15 and $20 bills. It was an awesome experience for them to see just how giving people can be,” Miller said.

The boys raised about $400 that first summer and that’s all it took for them to know they didn’t want to stop there. The group of friends expanded their efforts the following spring with the help of Jim and April Vaughn of Whalebone Surf Shop. The couple donated a surfboard for the boys to raffle off. The surfboard raffle raised $2,000 for Surfing for Autism. In the meantime, they also continued their snow cone business that summer and were able to bring in more money for the non-profit group. This spring, the Vaughns again donated a surfboard so the boys could hold another raffle. This year’s raffle raised an initial $3,000, but winner Mary Winstead returned the board to the boys so they could continue to sell raffle tickets. The result was an additional $1,000. The board was finally awarded to a winner in August. “A tiny idea has turned into something that I know Connie Grizzard and I will encourage the boys to continue to participate and raise money for in years to come,” Miller said. She says that likely won’t be enough to keep the do-gooders happy, though. The friends have attended the event each year and have big plans to one day volunteer as surfers who work with the children.

“We have been humbled by the continued support and awareness by the Millers and Grizzards,” said SFA president Eileen Lowery.  “It has been wonderful to witness kids thinking of others and then actually following through by helping their own peers.”

Their efforts, she said, have caused a ripple effect among local children who have also begun to raise money and awareness for SFA. Last year, the four received the Eric Gardner Memorial Award for their efforts. This year, the torch was passed to Seth Daniels and Kai Collins. The two elementary school children made and sold rainbow loom bracelets to raise money for SFA. The award is given to community members who exemplify Gardner’s passion for SFA’s mission. A local businessman and avid surfer, Gardner died in January of 2013 and was instrumental in the organization since its conception.

Eighty-five children participated in the two-day event last month at Jennette’s Pier. Proceeds from a silent auction earlier that month were used to provide the weekend free for participating families. The annual event this year included dinner, fishing for children and siblings and a lesson in surfing skills at Jennette’s Pier on Aug. 22. The next day, children were able to surf for four hours, each helped by two surfers and a skilled therapist or teacher.