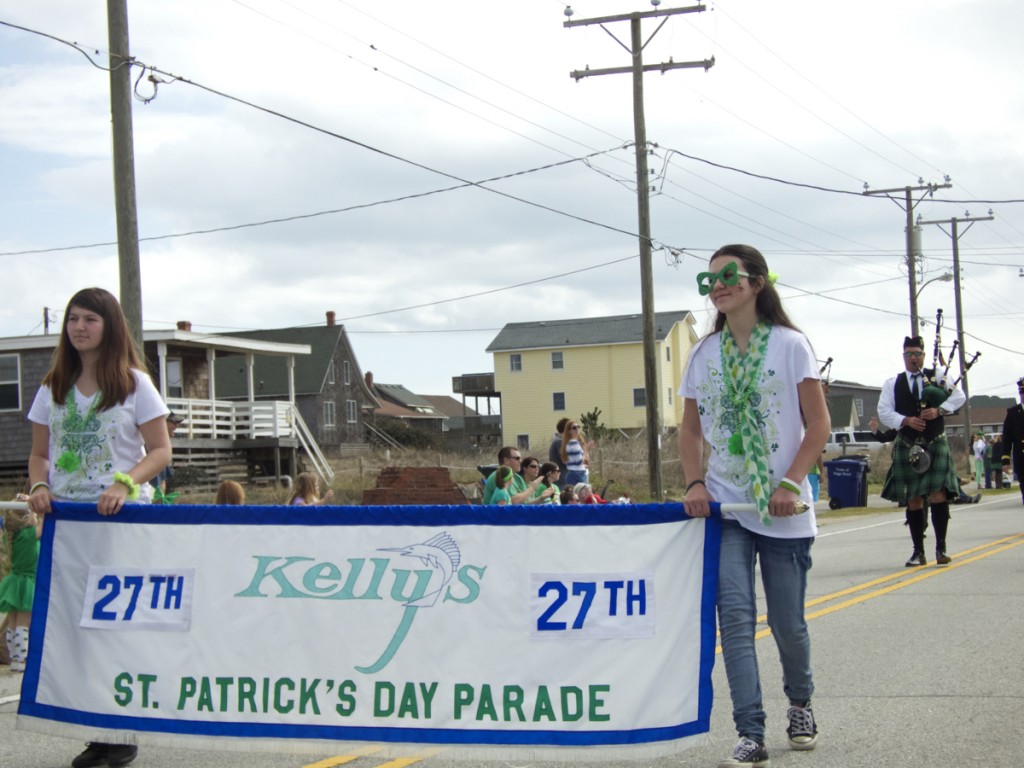 With 27 Kelly’s St. Patricks Day Parades as part of Outer Banks lore reflecting back on the history of the parades seems natural. That doesn’t mean the 2016 version somehow lacked anything—it was as good as anything we’ve had in the past, but with so many parades and so much fun, thinking back over the years seems natural.

I had only been on the Outer Banks three months at the time and was living above Glenn Eure’s Ghost Fleet Gallery, which was the perfect place for an introduction to Mike Kelly’s gift to the Outer Banks.

The Ghost Fleet Gallery sits on Driftwood Street in Nags Head which is where the parade ends. My neighbor, Kim, knocked on my door about 12:30 and said in that wonderful southern drawl she had, “Kip, you just gotta see this parade.” Which answered my question about why people were parking everywhere and walking to the Beach Road.

Kim and I sat on the balcony over the gallery and watched the most remarkable collection of Outer Banks society that could be imagined. 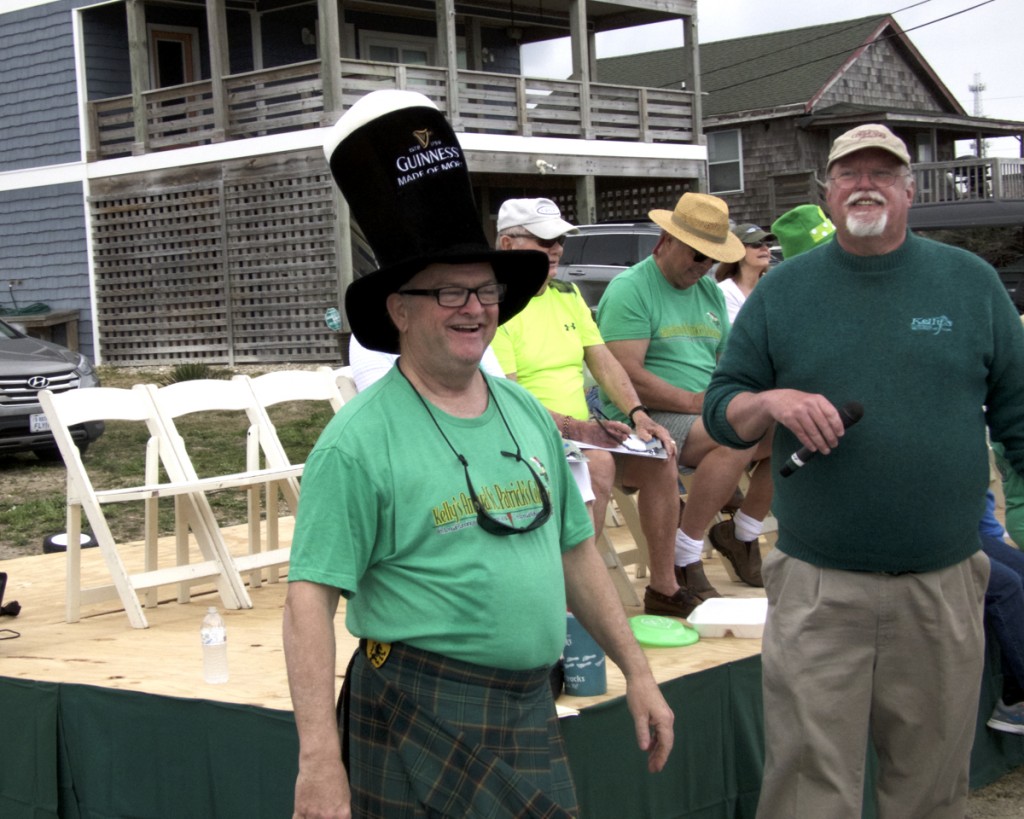 Mike Kelly and Master of Ceremonies Bob Muller. Bob did an outstanding job of announcing the participants as they passed the review stand.

From the beginning Mike Kelly seems to have understood that the best parade is a reflection of the community, and the Kelly’s St. Patrick’s Day Parade has always offered a true slice of Outer Banks life to the crowds that line the route.

My daughter’s girl scout troop marched in the parade twice, and that tradition of kids and local organizations being a part of the parade is one of the features that creates such a strong connection with residents of the Outer Banks and visitors. There is a sense of belonging within a community that kids seem to naturally foster. 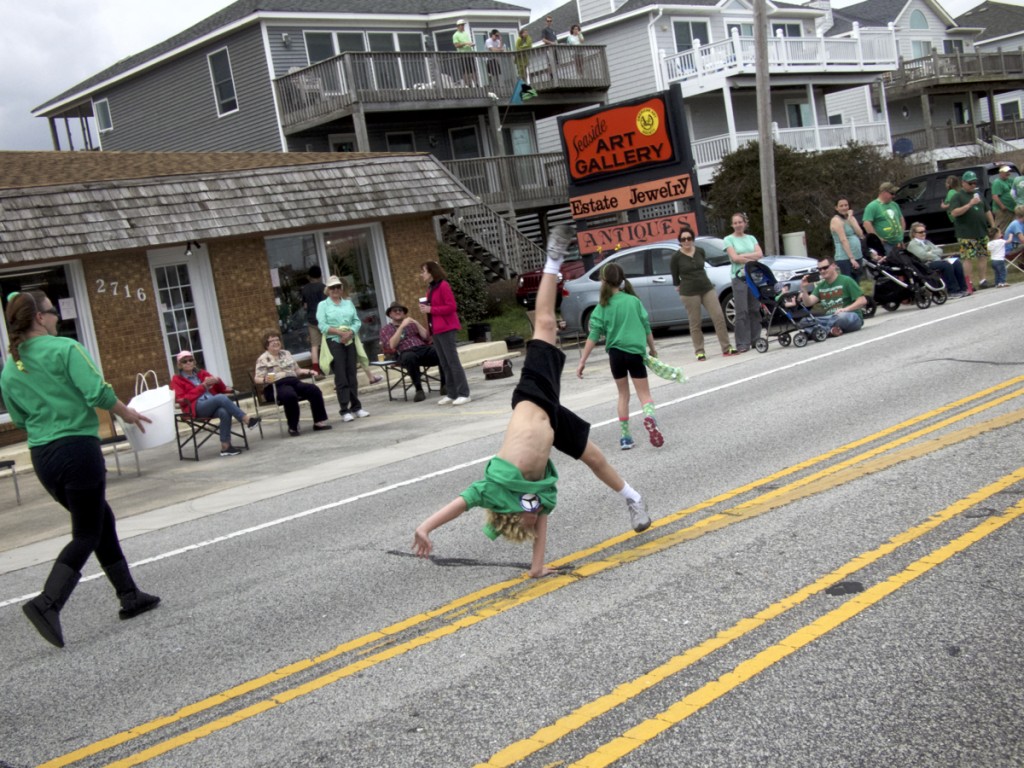 Cartwheels down the Beach Road from Dare County Gymnastics.

That was really on display in this years parade; Dare County Parks and Rec had a lot of kids marching along and then there were the kids from Dare County Gymnastics cartwheeling down the Beach Road.

That first parade I witnessed, the weather was cool and pleasant. The 2016 weather started warm and sunny, giving way to overcast with a cool breeze and threat of rain. I think it actually spritzed at one point, but that was hardly noticeable.

Honesty compels me to admit that good weather is not always the case, but to the best of my knowledge no parade has ever been canceled or postponed because of the weather.

I remember covering the parade five or six years ago in what was one of the most challenging experiences I’ve had. The day started very pleasantly with sunshine and—unfortunately— a breeze from the east. Since the ocean temperature was about 20 degrees less than the air temperature, it didn’t take long for a very cold fog to roll in accompanied by a 10 or 12 mph wind.

I’ve stood on top of mountains in the dead of winter and not been as cold as I was that day.

There are quite a few traditions that show up every year. I have no recollection of the parade without the trumpet playing unicyclist; dogs dressed in St. Patrick’s Day regalia are a necessity; and the parade of classic and perfect modern cars is always fun.

I did miss the South Nags Head White Trash Marching Band and Beach Chair Drill Team. Hopefully they’ll be back next year.

Speaking of next year, I’m already starting to look forward to it. Hope to see you there as well.