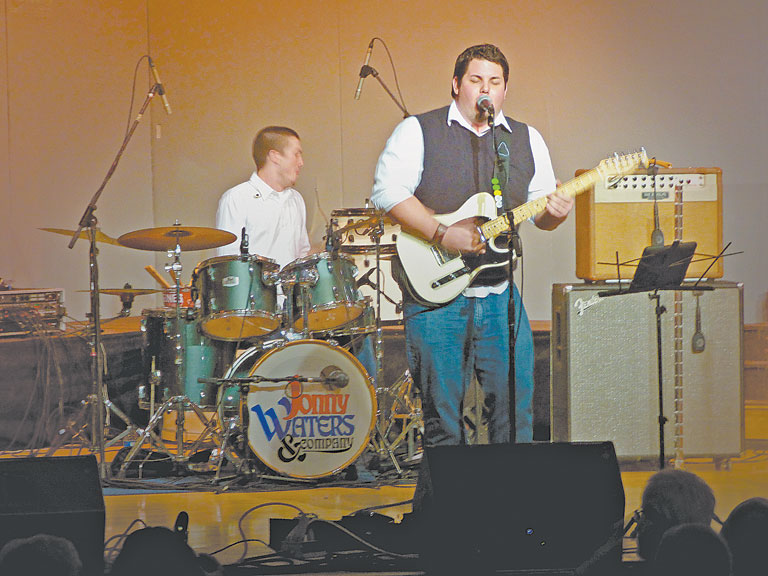 When we caught up with Outer Banks singer/songwriter Jonny Waters for a phone interview, he was in Nashville, on a break from recording his two newest singles, to be released this summer. The busy Columbia native has earned a huge regional following in recent years, with a laid back country-fried vibe mixed with some old school rock swagger, and the future couldn’t be brighter.

“I guess I’d have to use southern rock as a description if you had to pin it down to one genre,” Jonny says when asked to describe his sound. “We do country, but we also do rock, and we throw in reggae and blues. Ocean Boulevard described us as rockabilly. A lot of people call us a country band. Some people just call us a rock and roll band.”

The band – Jonny Waters and Company – has gone through a few lineup changes over the years, but Waters has remained the driving force and primary songwriter.

“The first shows I did were solo,” he recalls. “When I moved back to North Carolina in 2008, my dad would play percussion.

“While I was at ECU in 2010, they were doing a battle of the bands, and I put a band together for that. We placed, and the prize was to play their spring festival, which is a pretty big deal. They bring in a big headliner, and the winner gets to open. From there, it’s just become more of a band thing and less of a solo thing,” says Jonny. “Bill Jolly does bass now, and his nephew Alex Jolly has been with us for two years.”

Waters, who won the 2012 OBX Entertainment Award for Band of the Year from OBXentertainment.com, says his unique blend of musical genres comes from a wide range of personal influences.

“Growing up with my grandparents, I was exposed to a lot of old country,” Jonny explains. “Alan Jackson, Charlie Pride, Randy Travis, Merle Haggard, all those guys were always playing around the house and in the car, so that was some of the first music I heard.

“As I got older, I was exposed to a lot more edgy stuff like rock, Nirvana. I was around 10-years-old not long after the whole grunge movement started, and that really affected me. Bands like Metallica were a big part of my influence as a teenager.

“As I joined the Army, meeting people from all around the world, I got exposed to a lot of different types of music, and that’s when I really started to delve into other stuff.

“An underlying theme that’s always been there is a strong love for the blues. Buddy Guy, Muddy Waters, Lightning Hopkins, guys like that I can listen to over and over and it never gets old.”

Waters said his first single “Flip Flop Cowboy” was a love letter to his home, the Outer Banks.

“My whole goal of the ‘Flip Flop Cowboy’ video was to boost the Outer Banks, and put as many people in the video as possible to help them grow their names and their businesses.”

Look for Jonny Waters’ two new singles “Too Hot for Clothes” and “Saving Grace” this summer.