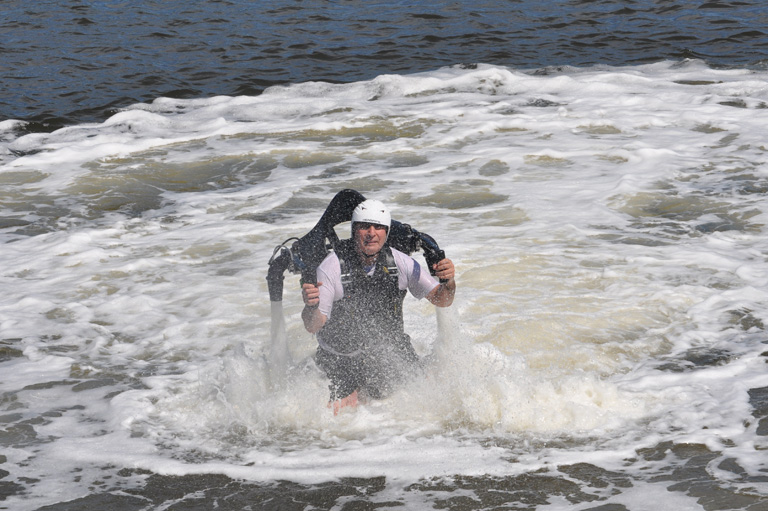 The author almost hovering. We ran out of disk space on the camera so there's no images of me above the water. Butch says I should say I was 30' up but there weren't any pics. That seems like the fish that got away.

Every once in a while I get to experience something that leaves me speechless. I had a chance to try Butch Stone’s Obx Jet Pak  and here’s my reaction: “Wow! OMG! Awesome! Amazing!”

Which says a lot about my reaction to flying (well, trying to fly) a Jet Pak and what the whole experience is like.

Located in Manteo by the bridge to Festival Park, Jet Pak has a nice little protected area to teach people to soar using water power.

There’s a good five or ten minute instruction period as you’re getting strapped in to the harness. There’s a sound check on the helmet, safety checks on all the straps and words of advice.

The instructions were excellent, and they logically made sense when Butch told them to me. They were much more real, however, after I actually started to understand what I needed to do.

Two points in particular that Butch brought our were the key to the whole thing and probably the hardest to master: when you’re in the water, don’t kick, and keep your hand level.

That seems pretty simple, but what I found was that not kicking when you’re in the water is counter-intuitive—at least for me. The problem is, that kicking motion counteracts the water jet.

Then, after about 10 minutes, I began to get it. I started to make controlled turns . . . I was able to stop and almost hover in one place.

Butch added a little power and, Wow! OMG! Awesome! Amazing! I was hovering completely out of the water.

I started doing some gentle turns, was able to maneuver just a bit up and down.

We switched over to a more powerful control system that allowed me to get a good 4-5’ over the water—which, believe me, seemed more like four or five stories at my level of expertise.

A couple of notes about what to expect. It does take some physical effort. You don’t have to be in great physical shape, but be aware that there is a certain amount of exertion involved. It is a little bit frustrating at first. Stick with it, it’s worth it.

The Jet Paks are capable of putting a person 33’ into the air. I’m not quite there yet, but I would definitely go back a second, and probably even a third time.