Hurricane Matthew Heads Out to Sea 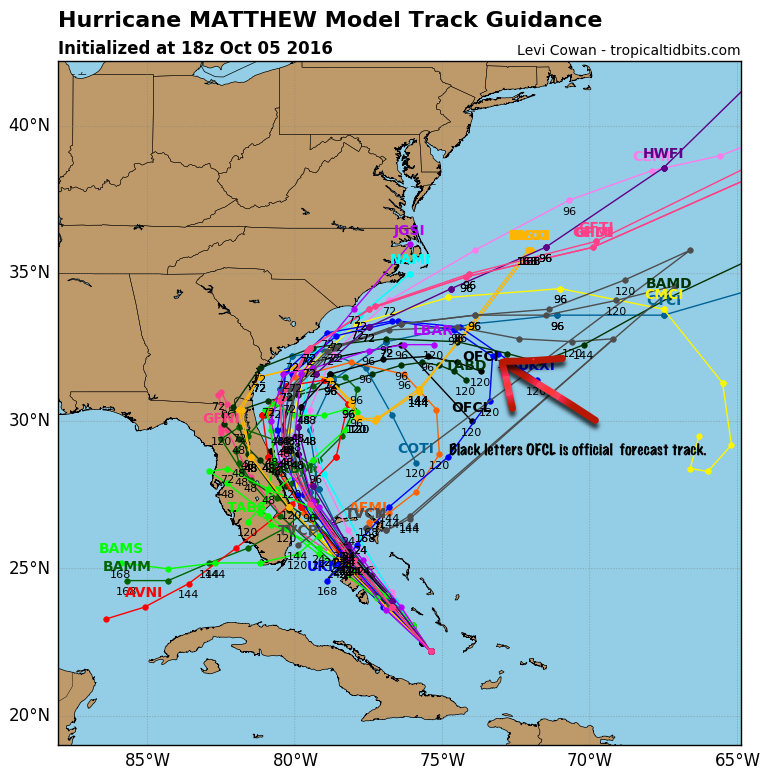 It looks as though Hurricane Matthew is going to curve away from the coast and head out to sea, which for everyone on the Outer Banks is a relief.

We’ll still feel the effects—are feeling the effects. The Beach Road in Kitty Hawk by Black Pelican is closed again as high seas from the storm pound the coast and crews are out there trying to stem the tide with sand.

Mike Dianna had to cancel the Mustang Music Festival this year. That is really sad; he had an outstanding lineup ready to go and the festival has become a highlight of the fall music scene. It was a painful decision, but it was the right one—and that gets to the heart of the effects from Matthew.

Even though the storm is forecast to pass well south of the Outer Banks, moisture from Matthew is getting sucked into the atmosphere and Saturday especially has been consistently forecast to be wet and windy. Those are not conditions that are safe for an outdoor festival.

The Town of Duck has not made a call yet on the 10th Annual Duck Jazz Festival, and we’ll cross our fingers and hope for the best. Headliners Frank Vignola and Vinny Raniolo who will be playing Saturday afternoon are amazing and if all goes well they’ll get a chance to perform.

Unfortunately the 10th Annual Duck Jazz Festival has also been canceled. Statement from the Town of Duck below:

We regret to announce that after much deliberation, festival organizers have decided to cancel this year’s Duck Jazz Festival and all associated events. While Hurricane Matthew will likely miss our area, the forecasted wind speed (30+ mph) combined with a 100% chance of several inches of rain on Saturday and Sunday, led us to this decision. Unfortunately, due to the complexity of festival logistics and performer schedules, the event will not be rescheduled. We look forward to a successful 11th Annual (minus 1) Jazz Festival.

The 24th Annual Parade of Homes is still on tap although participants may have to dance between raindrops to see all 19 homes. The Parade runs Thursday through Sunday so as long as visitors aren’t trying to schedule everything in one day they should be fine. Or take a “do nothing” day on Saturday and wait for the weather to improve. Sunday does look like a better day than Saturday.

Living on the Outer Banks, weather extremes become a fact of life and all of us learn to accept there is a limit to what we can do.

Nonetheless, there is a lot of anxiety associated with seeing a hurricane track bring a storm directly overhead, which the official track predicted yesterday morning—especially when a storm is as powerful as Matthew has been. 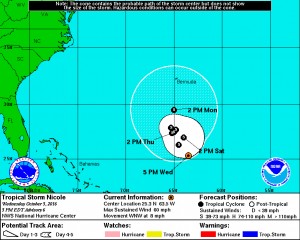 There is always a bit of a cautionary note on tropical storms and the final chapter has not been written on Hurricane Matthew yet, although increasingly it’s looking as though the pieces are in place to push it out to sea and away from the Outer Banks.

Hopefully, Matthew is the last of the tropical storms for the season. Yes, Nichole is out there in the Atlantic, but she seems to be wandering around with no idea where to go.

“It is with immense sadness we have to cancel the 6th Annual Mustang Music Festival. After sleepless nights, consultations from local and regional officials, we have determined that proceeding further in our production is hazardous and unsafe for our patrons, crew and performers. While the forecast for Hurricane Matthew has improved over the past few hours, there is still much uncertainty to its effects. North Carolina is under a State of Emergency and evacuations of the the North Carolina coast are still possible. All tickets purchased with a credit card will be refunded over the next 10-12 business days. Tickets purchased locally with cash will be refunded at the point of purchase beginning Tuesday, October 11.
A major thank you to everyone that worked on trying to make my dream a reality. I’m hopeful to be able to recover from this setback and try again in the future.”