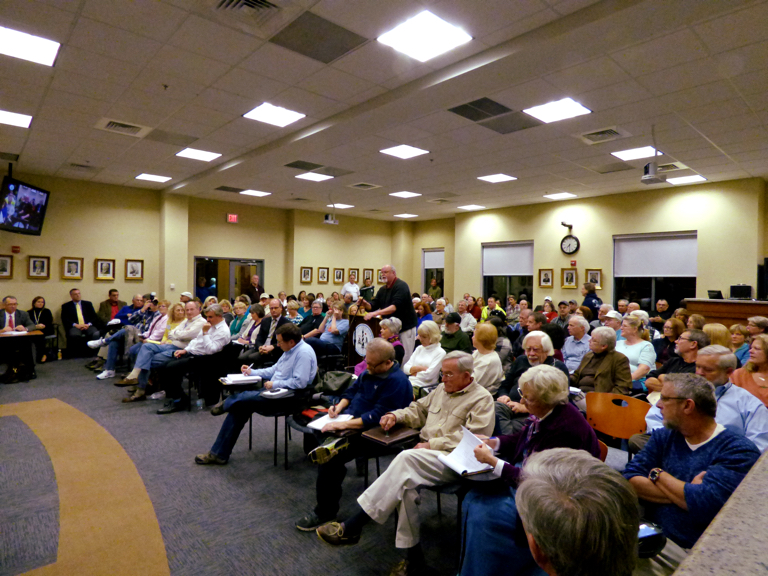 The first Dare County Commissioner’s Town Hall meeting was held Wednesday night and the range of issues and questions put to the commissioners seemed to cover almost every topic.

Commission Chair Bob Woodward began the night by addressing the issue of gas prices and the apparent inequity between the cost of fuel on the Outer Banks and the price just about everywhere else. 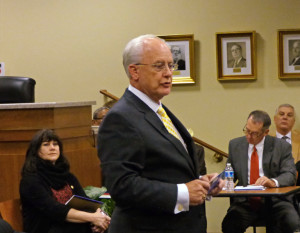 After noting that the commissioners had received considerable email correspondence on the subject, he confronted the issue, saying. “We’re aware of your concerns. We’ll address that Tuesday (at the regular board meeting). It’s high on our radar screen.”

There were more than 20 speakers signed in to speak to the commissioners and the range of subjects addressed began with concerns about the words employed on property tax evaluations. Tucker Freedman noted that the language used in notifying property owners stated the “. . . current assessed value represents fair market value.” He pointed out that language specifying the assessment was for tax purposes would have less potential for effecting the sale of a home.

Some of the issues were very specific to certain areas of the Dare County with Sandy Semans-Ross presenting a number of maintenance concerns in Stumpy Point.

If there was a theme running through the evening it was summed up by Tom Murphy of Rodanthe, one of the first speakers to come to the podium. “I don’t understand your talk about needs and want,” he said. “I am afraid that some things that are needs for some people will be considered wants by the Board of Commissioners.

Chairman Woodard addressed Murphy’s concerns quickly. “I don’t know who you’re talking to when it comes to cutting services and cutting taxes. Because none of the seven up here have said that,” he said. “What we’ve said is we’re going to deal with needs not wants. And I’ll give you one example.

Referring to a plan to connect the County social services and health department buildings, Woodard went on to say, “We looked at one of the wants   . . . and we don’t want to spend a little over $2 million dollars to connect two buildings together right now.” 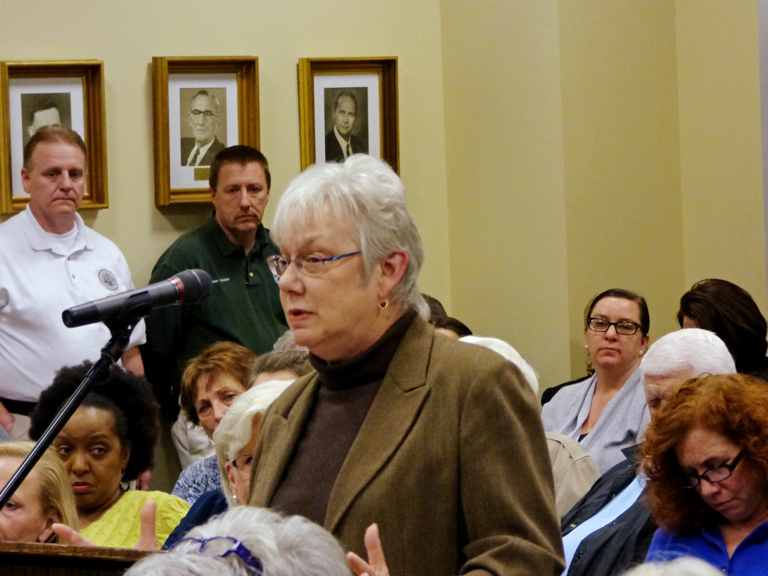 The definition of needs and wants was addressed effectively later in the evening when Nancy Griffin spoke representing the State of the Child Conference for Children and Youth Partnership of Dare County.

She first focused on the 2014 State of the Child Conference, noting that, “There was a lot of hope out of that room that day.”

Griffin then went on to describe needs and wants. “I hear the vision of distinguishing needs and wants and focusing primarily on what is needed,” she said.”The answer, however, to what is needed depends on the expectations that are to be met. And those expectations are based on what are the outcomes that we value as a community. And certainly you all, as the decision makers, what are the outcomes that you value representing us.”

It was earlier in the evening that the decisions elected officials can have on the county’s citizens was brought to life in an emotional plea for help from Gretchen Montague, the Operations Director for Room in the Inn—a support and shelter service for Dare County homeless.

Expressing gratitude to the county for its help in transporting the guests of the Inn as they move from one sponsor church to another, Montague described the needs that her organization was finding it increasingly difficult to meet.

“We are very grateful for the County’s use of the van,” she said. “Without the County transportation system, we would have no program at all.”

However, as she talked she described a range of services that are distinctive to the organization. She talked about how some clients needed to be transported to mental health facilities, or others needed transportation to potential jobs. The result has been a part-time employee working more than full time hours and volunteers chipping in to help with transportation needs.

“The individual needs that have to be met with the 30 people I have, the counseling, the mental health, the addiction the job searching, . . . most of them are not able to sustain on their own,” she said. “I’m paid five hours a day. I work 12,” she went on to say in pleading for more transportation help. Concluding with “They have no voice and they’re homeless.”

As the testimony continued the shortcomings in the transportation support were clarified by Gail Sonnesso who works with Montague. “One of our problems with transportation . . . we have up to 20 people and the van can hold 12, so poor Gretchen . . . is using her vehicle all the time. We really need transportation to help our guests get into housing or to the services they need.”

Speaking for the commissioners, Chairman Woodard noted that transportation issues had just been addressed, but there was no specific answer to her concerns.

The response that the concerns of the citizens would be addressed was consistent throughout the evening, framed by Chairman Woodard’s opening remarks.

“It’s time we really focused on needs,” he said. “The best way to do that is to reach out to the community. I want to know what’s important to you.”