How the Bonner Bridge Reopened So Quickly 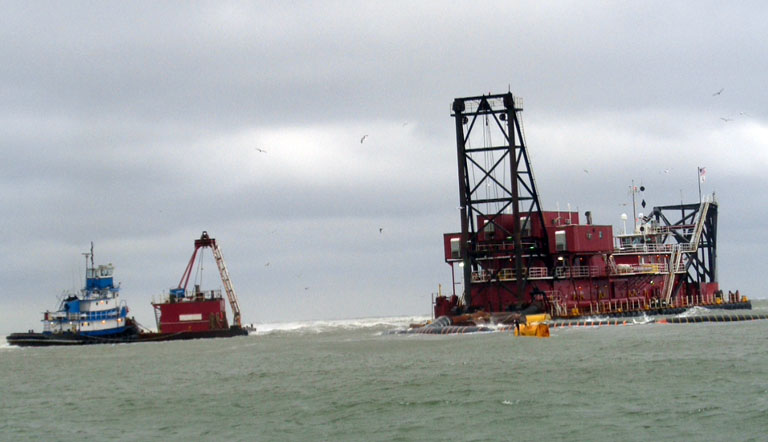 Reopened less than two weeks after an emergency closure for repairs, the Bonner Bridge has traffic flowing to Hatteras island again.

According to Jerry Jennings, NCDOT Division I engineer, dredging operations that were already underway in Oregon Inlet to make the channel safer, allowed contractors to quickly fill the scoured areas that had fallen below the safe level of sand. “We were able to (replace the sand) well above the critical threshold,” Jennings said.

Pilings that form the support structure for the bridge must have a minimum of 20’ of sand and sediment covering them to be considered safe. An engineer’s report in late November, confirmed by divers confirmed by divers on December 3, indicated one of the support structures on the southern part of the span had so little sand holding it in place that continuing to use the bridge posed an immediate danger.

The Great Lakes Dredge and Dock Company, Dredge Alaska, was already on hand clearing out the Oregon Inlet channel. By redirecting the spoils—in this case sand—to the scour site, the pilings were quickly stabilized.

The work is not completed. According to Jennings, the stabilization process is continuing, consisting of a layer of sediment followed by a layer of sand bags and another layer of sediment. Additionally, “a-jacks”—studded sleeves that prevent scour, will also have to be installed.

The reopening of the bridge comes as a permanent replacement for the temporary bridge over the area breached during Hurricane Irene is about to begin. The 2.1 mile bridge has a contract cost of $79.7 million and will take a little over two years to complete. Plans call for the bridge to span one of the most active parts of the Pea Island shoreline.