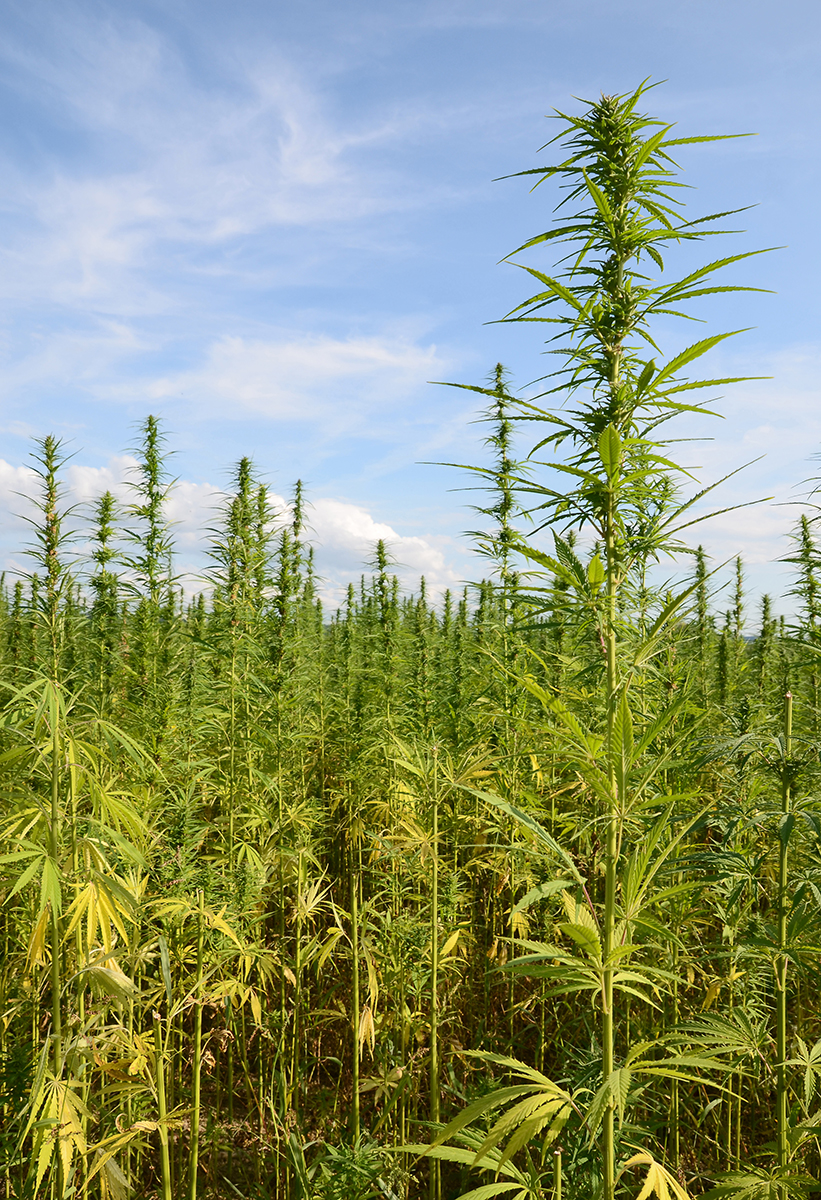 A field of hemp being grown for industrial purposes.

If Bertie County farmer Fen Rascoe has his way, hemp will once again be planted in North Carolina. It’s still early in the process, but he’s optimistic – and for good reason.

At one time hemp was an important cash crop for American farmers. George Washington grew it, and so did Thomas Jefferson. Until the 1920s, the United Sates government actually encouraged farmers to plant it.

The problem is that hemp is Cannabis sativa. So is marijuana – the plant that an increasing number of entrepreneurs are growing in Colorado, California and Washington. There are significant differences in how hemp and marijuana are planted and harvested, including huge differences in the seed stock…but genetically? It’s the same plant.

At one time when people thought of hemp they thought of rope, paper and clothing, and there’s a lot of evidence that it’s a superior product for many of those uses.

Yet it fell out of favor, and was almost eradicated in the U.S.

There were a couple of reasons for that. Big businesses and money certainly played a role. Hemp makes a very good quality paper. But small farmers couldn’t compete against the timber barons who saw hemp as a direct challenge in the paper market. There were other big business competitors as well, but the true death knell for the plant in the U.S. came in 1937 with the Marihuana Tax Act, which placed a tax on the sale of cannabis. The act was overturned in 1969, but Congress responded quickly, passing the Controlled Substances Act in 1970 that categorized marijuana as a schedule one narcotic.

Schedule one narcotics are defined by the U.S. Food and Drug Administration as having “[N]o currently accepted medical use and a high potential for abuse.”

A Time of Renewal

Forty-seven years later, the world is a very different place. There is no agreement on an exact number, but a conservative estimate is that there are at least 25,000 industrial uses for hemp – everything from biofuel to a fiberboard that’s lighter in weight, stronger and less absorbent than drywall.

Bowing to pressure, and recognizing that U.S. farmers were being shut out of an expanding world market, the 2014 Federal Farm Bill included provisions for states to determine if hemp was a viable product.

Federal law provided guidelines that a number of states quickly enacted, including the fact that industrial hemp can be grown or cultivated “for purposes of research conducted under an agricultural pilot program or other agricultural or academic research,” and that “the growing or cultivating of industrial hemp is allowed under the laws of the State.”

Which may begin to explain why Fen Rascoe is so optimistic.

Fen is an appointed member of IHC, which is currently wrapping up one of its most challenging tasks – creating rules and an application to purchase seed.

According to Fen, the commission’s most recent February meeting went very well. “Rules were adopted and an application was voted on, which should be available by March 1,” Fen said. “We [farmers] are planning on planting in May, provided there are no unexpected hurdles with applications, customs, or the Drug Enforcement Administration (DEA).”

There are no guarantees however, and even with the N.C. Department of Agriculture behind it, which the IHC falls under, there are still hurdles.

There is no domestic supply for seed, and the seed has to be certified to meet DEA requirements. According to Fen, the seed he hopes to use this year will come from Italy, which is why his optimism is tempered with concerns about unexpected hurdles.

It’s also a crop that has not been planted legally in this state for 70 years. There’s lots of information on how to plant it in China (the world’s largest producer of hemp), as well as Italy and even Kentucky (which is currently the U.S. leader in hemp production). But as Fen points out, “There’s no one alive who’s ever legally planted it in North Carolina.”

“We really don’t know if hemp’s going to be a successful crop or not for the state,” he said. “We assume it can be grown because it was grown before it was illegal. We were one of the higher production areas. But that does not necessarily mean it can be grown competitively with other crops.” 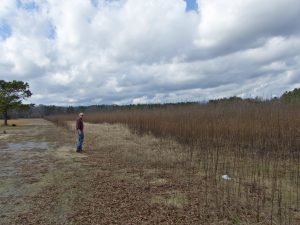 Fen Rascoe looks out on his most recent crop of kenaf, which is ready for harvest. Photo by Kip Tabb.

There is some evidence that hemp will be successful in the state. Kenaf, a plant with similar qualities to hemp, has been part of crop rotations among state farmers for some time. A tropical plant, it does well in Bertie County soils – where Fen has a few hundred acres under cultivation.

Kenaf has been grown in tropical countries for centuries and its fibers are used for making a variety of products, including engineered wood and clothing. Recently, paper has been produced from its core in a process similar to making hemp paper.

A member of the hibiscus family, the plant grows to about 18 feet or more, with branches that support five narrow, serrated leaves.

Though it is similar, hemp is considered the superior crop for a number of reasons.

Because it is a tropical plant, kenaf tolerates a more narrow temperature range than hemp. Hemp is also more drought tolerant than kenaf, making it more reliable for farmers, and hemp requires less fertilizer than cotton, tobacco or almost any commodity crop.

The fiber from the outer sheath of the hemp plant (the bast), is considered better for making cordage and fabric. The core of the plants, called the hurd, has similar qualities. Both can be used to make a good quality paper using less energy and fewer chemicals than wood pulp. However, there are more products and uses for hemp hurd than have been identified for kenaf.

Hemp seeds are also very high in protein and essential fatty acids. Hempseed oil is considered very healthy as well, although it is not a cooking oil.

Finally, one of the most rapidly expanding areas of study in terms of hemp products is their potential medical benefits.

Cannabinoids are chemical compounds unique to a Cannabis sativa plant. Tetrahydro-cannabinol (THC) is the most well-known, but it’s just one of 66 cannabinoids that have been identified within the plant. None of the other compounds have the psychoactive effects of THC.

Industrial hemp grown in the U.S. can have a THC content no greater than three-tenths percent, much less than recreational marijuana which averages 10 percent or more.

Ongoing research on the plant’s cannabinoids seems to indicate that some may have medical applications.

Infrastructure and the Future

Like any farm commodity, the process of getting hemp from farms to consumers involves a number of steps. Without the infrastructure in place to handle the crop, Fen will not be able to get his product to market.

But infrastructure may be where North Carolina is poised to become a national leader.

One of the early problems with creating hemp products in the19th century and earlier was separating the bast from the hurd. In 1919, George Schlichten received a U.S. patent for his decorticator – a machine able to efficiently process fibrous plants.

Not much came of his invention in the years immediately following its introduction, but Schlichten’s creation is one of the reasons hemp is able to compete with so many other products.

In many ways, the decorticator is the hemp equivalent of the cotton gin.

In 2015, Industrial Hemp Manufacturing, LLC, opened the largest decorticator plant in North America in Spring Hope, N.C. The 70,000-square-foot industrial facility is located about an hour’s drive west of Fen’s farm. The plant has been processing kenaf, but has its sights set on the hemp market.

Fen is optimistic about hemp being a cash crop in North Carolina, but he’s tempering that with years of experience working the land.

“It can have all the symptoms of a gold rush without any gold at the end,” he said. “But I think it’s a crop that farmers are going to be able to put into their regular rotation and make some money off it.”

In Fen’s view, the future of hemp in the next two to three years seems promising. “More big businesses and clothing retailers like Panera Bread and Patagonia want something green associated with them,” he said. “Consumers are demanding it.”

And hemp may be just the type of green consumers are looking for.