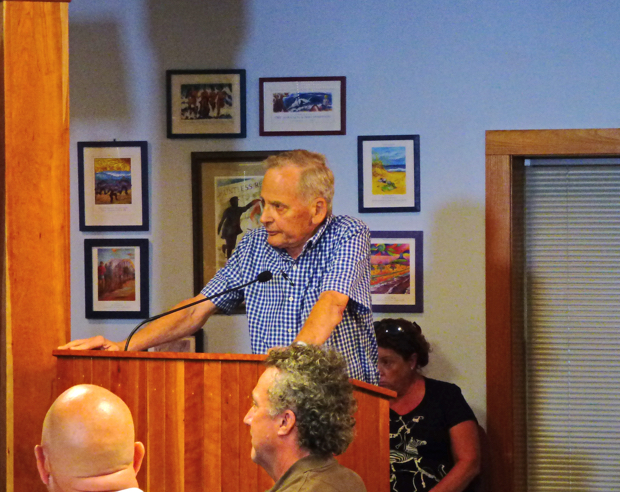 At the last public hearing on the Kill Devil Hills 2015-16 budget before a vote is taken on June 24, emotions ran high as some residents questioned the fairness of the formula the commissioners had presented to fund Dare County’s Interlocal beach nourishment project.

Speakers voiced universal support for beach nourishment, but to two of the speakers the discrepancy between what property owners in the beachfront Municipal Service District (MSD) would be paying and what all other property owners in the town will pay was unreasonable. Currently the tax rate for the town has been raised .03/mil and the beachfront MSD will be paying an additional .33/mil.

Former Town Commissioner Bill Pitt, speaking as a private citizen, outlined the history of how the funding formula for beach nourishment had been developed, pointing to the town of Nags Head as the trailblazer in the process.

“This effort really got started when (former Mayor) Bob Oakes finally found the template that worked for a local effort to succeed in Nags Head,” Pitt said. “He was a courageous guy because he put everything on the line.”

He went on to describe how as a regional endeavor the town was still going to have to chip in half of the cost of the county’s effort. The formula Nags Head used to fund their project—varying tax rates based on proximity to the ocean—is the same formula that Duck, Kitty Hawk and Kill Devil Hills, the three towns participating with Dare County in the beach nourishment project, are using.

The objections came in the manner in which the tax rates are being implemented. In a particularly contentious and angry public comment, beachfront property owner Lou Craig told the commissioners that they had failed to take into consideration his concerns or to fairly represent him as a resident. “Do you remember 1776 and the history lesson where the United States got away from the British government because of taxation without representation? We have no representation,” he said.

Commissioner Michael Midgette asked the board to consider a different formula that would narrow the gap between the new rates for beach front property owners and all other Kill Devil Hills residents. The four other commissioners made it clear that they were opposed to changing the formula with so little time before the budget vote, noting that next Tuesday, June 24, they would have to approve the town budget.

Mayor Sheila Davies did point out that changes could be made in next year’s budget, but that it was essential that there was no delay in moving forward in conjunction with the other towns.
“I’m not in favor of changing this at this time,” Davies said. “I think at this point when we have been putting this figure out for our year round population—that would be a tough change.”

She also explained that changes could be made in the future. “This (tax rates) is something that is set annually. As we continue our discussions . . . we would have that flexibility (to change tax rates) in future years,” she said.