Gift of Song from Lost Colony 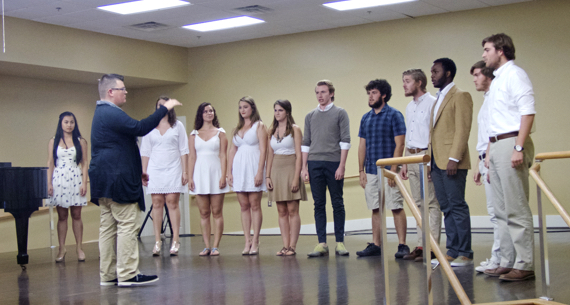 The Lost Colony Choir in an acapela performance of “The Battle of Jericho” at the conclusion of their program.

For almost 80 years the Lost Colony has been a rich and wonderful part of Outer Banks life. At a free concert on Sunday at the Dare Center in Manteo “Songs for a Sunday Afternoon” put the talent of the theater company on full display.

For the Lost Colony choir under the direction of Jordan Prescott, it was a tour de force performance that highlighted the remarkable talents of the play’s singers. Each member of the choir had an opportunity to appear as either a solo or in a duet and there was not a weak moment in the late afternoon program.

Equally impressive was Prescott on piano. An ECU senior this coming year studying pipe organ performance, his touch on the piano was ideal for the singers and the setting. This was true accompaniment—enhancing the songs but never getting in the way of the melody. 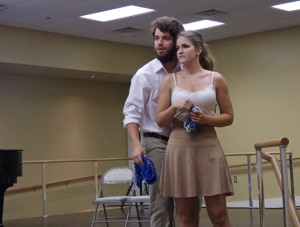 The selections were from a list of songs given to Prescott. “I told the (members of the) choir to give me a list three songs and then I chose one of them,” he said.

The songs created a marvelous narrative of musical theatre. Anna Lee Rea’s performance of “Poor Wandering One” from the Pirates of Penzance was quintessential Gilbert and Sullivan—a perfect send-up of the arias of the mid 19th century and their excesses. Deonte Goodman’s “King of the World” from Song for a New World was a great way to start things after the intermission; Devyn White and Ben Fierke’s “People Will Say We’re in Love” was delight to watch and hear.

Good writing precludes listing every performance, but they were all worthy of note and it’s unfortunate that I can’t list them all.

The concept for “Songs for a Sunday Afternoon” was an outgrowth of past years of community involvement by the Lost Colony, according to Prescott. “We’ve had performances in the past but on a smaller scale,” he said.

Past years included some singing and the dance troupe would also perform, but this year’s event is the most extensive song list that has been presented. “It gives people (in the choir) the opportunity to do something they don’t get to do during the summer,” Prescott said.

The Assistant Musical Director for the Lost Colony, Jordan Prescott will be give an organ recital at Mt. Olivet UMC in Manteo next Sunday, August 16 at 5:00 p.m.