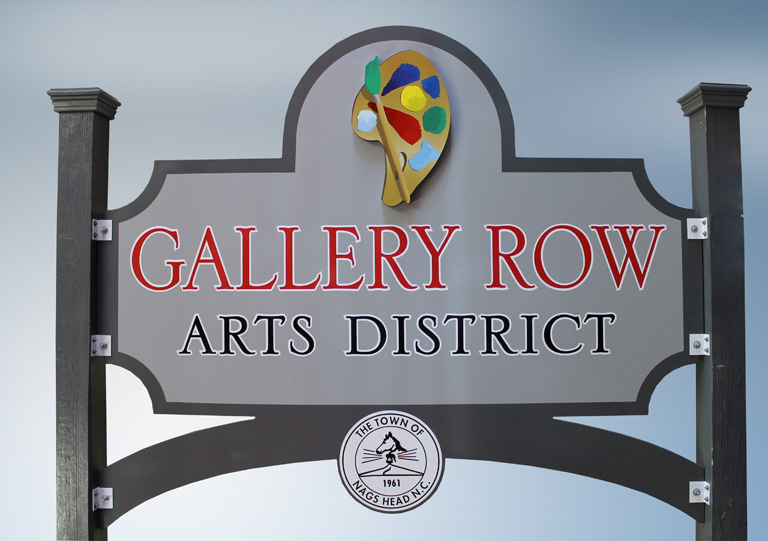 Gallery Row in Nags Head has been a part of the town for over 25 years, yet it has never been clearly defined nor officially recognized. That may be changing.

The town of Nags Head is putting up sign to mark the area and the first stirrings of a municipal plan have begun.

At a stakeholder’s meeting Tuesday night at His Dream Center, Nags Head Town Planner, Elizabeth Teague lead a roundtable discussion envisioning what a Gallery District should include and how the town and businesses can move in that direction.

With Mayor Bob Oakes and Commissioner Anna Saddler in attendance, discussion centered on what people would like a gallery district to be and how that vision can be realized.

Teague commented that this was the beginning of a process. Her thoughts were echoed by former Nags Head mayor and artist, Don Bryan. “You can’t create something in the blink of an eye,” he said.

Although a  number of concerns about how to improve the district were discussed, participants continually pointed to a lack of sidewalks as a problem. Bryan and Pat Eure, co-owner of Glenn Eure’s Ghost Fleet Gallery, noted that at one time there were sidewalks and in the first few Artrageous celebrations held in the 1980s, Nags Head closed the streets creating a street fair atmosphere.

The Artrageous celebrations were the first stirrings the Dare County Arts Council (DCAC) and the event continues to be the one of the major happenings on the DCAC calendar.

President of the DCAC, Richard Martin, pointed to the natural alliance that should exist between the galleries and the arts council mission.

Although no firm plans for a follow-up meeting were made, Teague suggested a visual rendering of what a Gallery Row District would look like could help the public understand the concept. She also discussed various grants that may be available if the project goes forward.