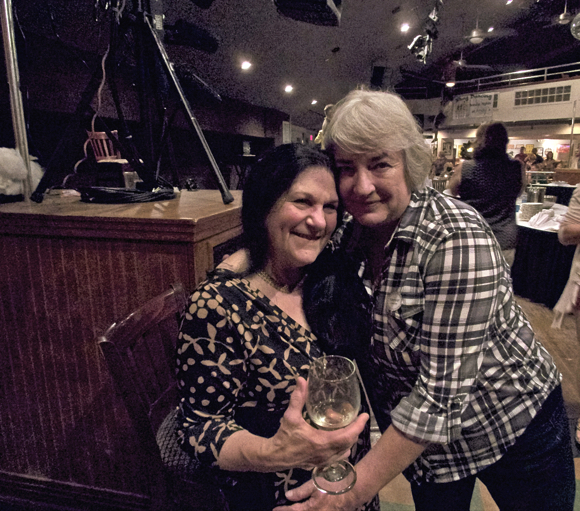 Maxine Rossman and Julie Short of Carolina Designs at the fundraiser at Kelly’s Tavern Wednesday night.

There was a fundraiser for Maxine Rossman at Kelly’s Tavern last night. That’s the headline, but it doesn’t tell the story; the statement falls far short of describing the caring, the respect, the admiration that the Outer Banks community has for Maxine.

“If you’ve been here 30 years you touch a lot of people,” Sandy Martin of Sandmark Construction said.

There is no exact count on how many people came out last night. Colleen Almoney and Julie Walter organized the event and they were taken aback by the response. “We had no idea how many people would come out,” Julie said. “We were expecting 100 people. I’ve heard 175—200 were there. It was off the charts. It was great. Just great.”

As much as the event was a fund raiser, it was also a way to thank Maxine for what she means to the community. The Executive Officer of the Outer Banks Home Builders Association, she has been on the Outer Banks for 31 years—according to her—and along the way she has been in the restaurant business and real estate as well as her current role.

Through it all there has been a constant theme to her life. “We all know Maxine is a person who is willing to help people in need,” Julie said. “She’s always encouraging them, teaching them . . .”

The reverse is not the case, as Julie pointed out. “Her comfort zone is giving. It’s not her thing to receive. That’s why it touched her heart so big to see so many people there.”

The idea of helping Maxine offset the costs of medical care for her daughter, Amanda, started with a GoFundMe page started by Colleen in June. But knowing the financial burdens that lay ahead for mother and daughter the friends suggested a fundraiser.

Maxine did not seem comfortable with concept but that hardly stopped the friends from moving the idea along.

“About three and a half weeks ago they said, ‘What about that fundraiser?’ They were going ahead with it but they neglected to tell me. Inside of one month they pulled it all together. I am in awe of what they did,” Maxine said.

“I didn’t realize I had this many friends,” she went on to say. “I’m so overwhelmed.”

Maxine’s daughter, Amanda, is ill—very ill. The tests, the travel to specialists from Raleigh to Hampton Roads, the medications—all of it has take it’s toll. The good news, such as it is, is a diagnosis has been made. It took five years to get there, but there is something tangible to treat.

The initial diagnosis of Uveitis, an inflammation behind the eyes, led to a protracted series of diagnostic tests and procedures. Uveitis is can be caused by a number of factors; for Amanda the diagnosis was an auto-immune disease–a diagnosis that rarely if ever occurs without other auto immune diseases present. At least one other has been identified and the search continues for more.

Yet if diagnosis means treatment is possible, that does not mean the 28-year-old will be magically healed. The medications are prohibitively expensive at “$2000 a pop, before insurance picks up their part of it” Maxine said, and because Amanda’s immune system is further compromised by sever allergies to mold and other environmental toxins, staying on the Outer Banks is not possible.

“She has no immune system,” Maxine explained. “She has to get out of this climate. Her doctors have agreed that Salt Lake City is the best for her to be. The humidity never gets above 28% there.”

The move seems to be the most suitable place for Amanda. And there is hope in that move. “The doctors think it will probably take 12 to 18 months for her immune system to reset itself,” Maxine said.

If it does, then her daughter who was so independent before the onslaught of her disease, will once again have her life back. “She will have the capacity to change this and make something good happen,” Maxine said.