From Forest to Beach 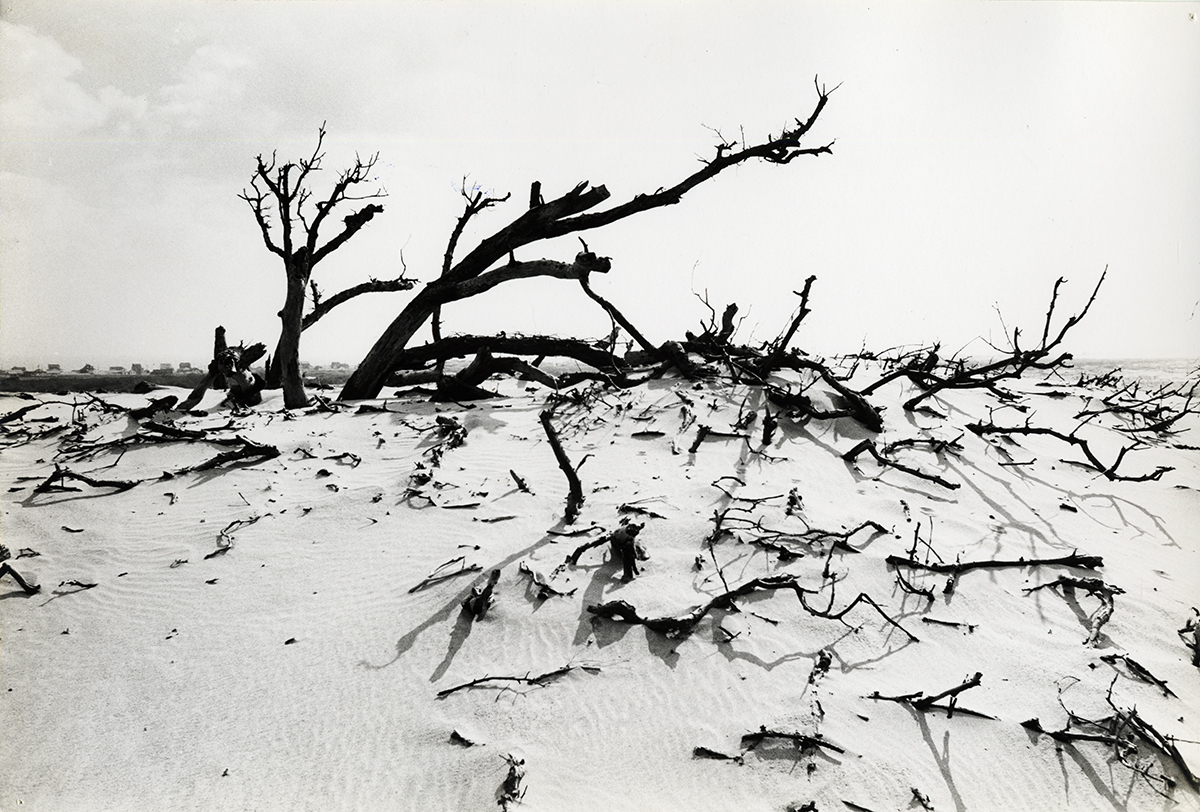 The Outer Banks is moving. For at least 4,000 years it has been steadily creeping closer to the continental United States.

When the wind howls from the northeast, standing in an unprotected spot near the shoreline can be a painful experience; granules of sand, pushed by winds in excess of 40 mph, threaten to strip the first layer of skin from one’s face. After the storm passes, sand from the dunes and beach is everywhere along N.C. 12.

Before the Outer Banks was a tourist mecca, before human intervention stabilized the beaches and roads and homes were built, that sand would have been pushed to the western side of the barrier islands and deposited.

Properly speaking, these barrier islands don’t erode—they migrate. And they have been migrating since they first rose from the sea.

The Birth of the Outer Banks

As geological formations go, the Outer Banks is a toddler barely out of its diapers, if even that old.

There was no one moment that marks the birth of the Outer Banks, but the consensus is it appeared between 3,500 and 5,000 years ago. The forces that created the Outer Banks, though, were thousands of additional years in the making.

The last great ice age trapped huge amounts of water in glaciers that covered much of North America and Europe. With so much frozen water, sea level was much lower and the coastline of North American was 50 to 75 miles to the east.

Although the glaciation period ended about 24,000 to 25,000 years ago, it took another 10,000 years before the ice began to melt, and that process began to accelerate about 12,000 years ago causing sea levels to rise rapidly. This created an environment in which the ocean was so turbulent that sediment was not deposited along the shoreline.

As sea levels rose, rivers flowing from the interior of North Carolina—the Roanoke, Albemarle and Pamlico—carried sediment to the waters of a rising sea.

As the sea level rise slowed, between 4,000 and 5,000 years ago, the sediment suspended in the ocean’s waters began to settle, forming sandbars along the coast. The rivers continued to carry sediment to the coast and that sediment continued to accrete on the sandbars, creating what we now know as the Outer Banks.

The Outer Banks has been on the move ever since. 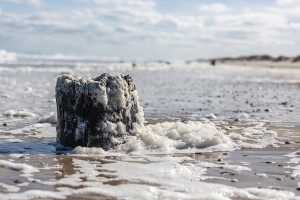 An uncovered stump in Carova. Photo by Cory Godwin Productions.

It’s important to remember that barrier islands are gigantic sandbars. Unlike a true island, nothing attaches the sand to a rock or permanent core. Because of this, when waves wash over the land, sand is picked up on the ocean side, deposited on the landward side and the island migrates.

Evidence of that migration can be clearly seen in a grove of petrified tree stumps on the beach just south of Carova. A similar phenomenon was exposed when Hurricane Irene cut a new inlet on the north end of Rodanthe, eroding the beach and uncovering tree stumps north of the S-Turns. At one time, those tree stumps were part of a system of maritime forests that streatched along the western edge of the Outer Banks.

When the Outer Banks first rose above the sea, it would have been a flat, relatively featureless sandbar. The theory of sand dune development holds that some form of debris was deposited on the sand, most likely seaweed, and that debris then began to capture windblown sand. Over time, sand continued to accumulate to form dunes.

When the sandbars known as the Outer Banks were fully formed, they trapped behind them an extensive estuarine network of sounds. Once the coastal plain of rivers flowing to the sea, these sounds tend to be relatively shallow, although their characteristics change as they move from the north to the south.

The Currituck Sound, especially on the northern end, is dotted with small islands; on the southern end the Pamlico Sound is a vast body of water that is the largest embayed estuary in the world—so large that when early explorer Giovanni da Verrazzano first saw it, he thought he had discovered the long-sought secret passage to the Pacific Ocean.

During storm events, water contained in the sounds is pushed by the winds—think of it as swishing water in a gigantic bathtub. As the waves build, if there is a weak spot in the shoreline, the sound will force its way through to the ocean. Often there is ocean overwash that weakens the area of an inlet, but the actual inlet is pushed open by the force of the waters in the sound.

Inlets tend to reoccur in the same areas and those areas generally correspond to ancient riverbeds.

On Sept. 7, 1846, a powerful hurricane roared up the Eastern Seaboard from the Caribbean. Sometimes called the Havana Hurricane because of the devastation it wreaked in the Cuban capital, the storm plowed into the Outer Banks, pushing a storm surge over the sand. As the wind shifted, the waters of the sound ripped open two new inlets—one just south of Hatteras Village and the other 50 miles to the north at a largely deserted strip of sand south of Nags Head.

The southern inlet quickly became known as Hatteras Inlet. To the north, the first ship to sail through the new cut was the side-wheeler S.S. Oregon, and Oregon Inlet bears its name to this day.

According to “The Outer Banks of North Carolina,” a professional paper prepared for the National Park Service, “Up to 30 inlets have opened and closed since the first settlers arrived almost 400 years ago.”

We are still witness to inlets opening and closing. During Hurricane Irene, an inlet opened just south of what was once New Inlet, an active area that opened and closed at least three times between 1657 and 1945.

Almost on the Virginia border, Old Currituck Inlet was directly across from Knotts Island. Explored by Amadas and Barlowe when they were mapping the North Carolina coast during the first voyage to Roanoke Island, the inlet closed in 1731. By the time the inlet closed, however, New Currituck Inlet had opened about three miles to the south.

New Currituck Inlet was a navigable entrance to Currituck Sound and so much commercial traffic passed through it that a customs house was established to collect tariffs when the United States became an independent nation. By 1828 the inlet had silted over and the area is now a part of Currituck National Wildlife Refuge in Carova. 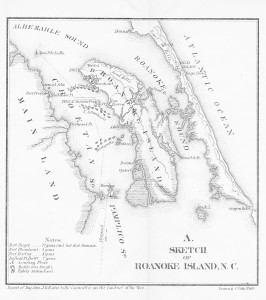 A Civil War era map marks the location of Roanoke Inlet, which was once in Nags Head.

Perhaps no closed inlet has had as profound an influence on Outer Bank history and its environment as Roanoke Inlet.

Roanoke Island was chosen as at the site for the first English settlement because of Roanoke Inlet. A broad, easily navigated waterway, it allowed ships to sail directly to Roanoke Sound and Roanoke Island with few obstacles in between. The inlet was located just about where Jennette’s Pier is today.

When sand sealed the passage in 1811, the closure triggered a remarkable change in the waters of the Outer Banks sounds.

Before 1811, the area between Roanoke Island and the mainland was a marshy wetland and shallow estuary. When the inlet closed the outflow from the Albemarle River, it could no longer flow to the sea on the east side of the island through Roanoke Sound.

Seeking an outlet, the waters of the Albemarle River moved to the west side of Roanoke Island, scouring the marshy wetlands that lay between Roanoke Island and the mainland. When Oregon Inlet opened in 1846, that scouring continued and because of that, Croatan Sound, although the smallest Outer Banks sound, is consistently deeper than other sounds.

People and a Mutable Environment

Oregon Inlet began its life two miles north of its current location and all indications are that if left to its own devices, it would continue to migrate to the south and at some point close.

There are a number of reasons for that, but perhaps the most significant factor in its movement and the constant silting of the channel is the littoral drift of the Outer Banks. Littoral drift is the nearshore current that runs parallel to the shoreline, and in the case of the Outer Banks it is predominantly north to south with some seasonal variations.

The movement of Oregon Inlet is typical of Outer Banks inlets and there are a number of examples of that. The Old Currituck Inlet closed and the New Currituck Inlet opened south of it. Hurricane Irene created a new inlet immediately to the south of where New Inlet had been located.

The migration of Oregon Inlet has been slowed through dredging and a terminal groin, but it continues to try to move south and the jury is still out on how successful efforts to hold it in place will be.

Oregon Inlet is not the only place humans are trying to stabilize the Outer Banks.

The dunes that line the Outer Banks beaches are not natural constructs; they are a legacy of the Civilian Conservation Corps (CCC), a government New Deal program that was designed to create jobs during the Great Depression.

The dunes the CCC constructed could be considered a first attempt at beach stabilization. Over time, it has been largely unsuccessful at keeping the ocean from encroaching on the land, but it did establish an infrastructure to support a nascent tourist industry.

Beach nourishment could be seen as an outgrowth of that first attempt to hold the ocean back, although the science and application of it is far more sophisticated than building a sand dune.

Successful in many applications—for the most part, Nags Head has stabilized its beaches using nourishment—the towns of Duck, Kitty Hawk and Kill Devil Hills will be pumping sand from the ocean floor to the beach next year.

Will attempts to hold back the sea and stabilize the shoreline be successful? That remains to be seen. Mother Nature works in millennia, not decades, and the story is still unfolding before our eyes.