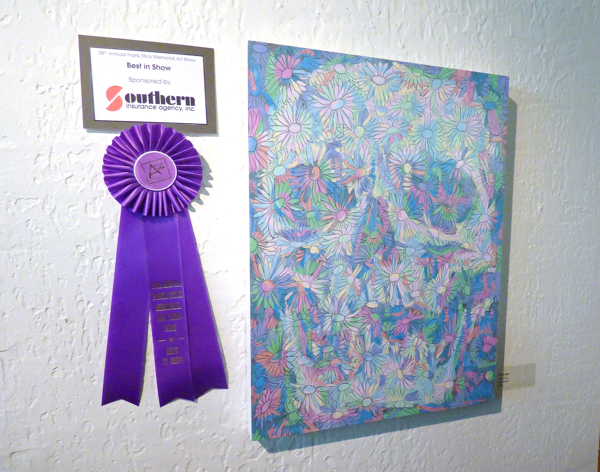 The Frank Stick Memorial Art Show is unlike any other art show on the Outer Banks. An open entry format, meaning entries are not juried in and as a consequence it becomes, as the Dare County Arts Council writes on its website, “a true sampling of the entire art community.”

Sponsored by the DCAC since the first show opened in 1978 and held at Glenn Eure’s Ghost Fleet Gallery in Nags Head, with its open format established artists are a little more likely to bring works that push the edges of what they have been doing, and new artists are encouraged to enter their work.

Last night’s (Saturday) opening night reception was typically packed; it would be tough to get a head count, but 350-400 would be a good guess. With 75 entries this year—a little bit down from previous years—there was a little more room to hang the entries and Gallery Directory Fay Edwards and Carol Trotman working with a team of volunteers did an outstanding job of keeping colors, textures and themes together, enhancing some truly magnificent art. 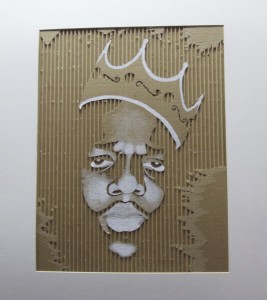 Best in Show was Felt Like Right by Travis Fowler, a piece that at first appears to be a field of flowers but resolves itself as the viewer’s eyes move away into a skull lurking beneath the flowers.
Every year the DCAC selects one piece from the Dare County Schools Exhibit to hang in the Frank Stick Show. The Schools Exhibit, in early January serves almost as an introductory act to the main event. This year Kyle Beckners’s Cardboard Portrait hung with the rest of the show.

In talking to Kyle, it was difficult to tell who was more excited, Kyle or his mother, Kristen. Kyle, who is a senior at First Flight High School is planning on going to Appalachian State next year with an eye toward Architectural Design. 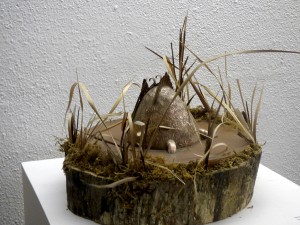 “Tip Up” by Tara Britton Wilkins.

The influence of family, especially on younger artists was clear. Tip Up by Tara Britton Wilkins seems deceptively simple until it’s examined more closely. A tribute to the hunting heritage of her family, the piece represents a duck blind. A recent graduate of COA’s jewelry program, her piece was created from raised and chased copper. 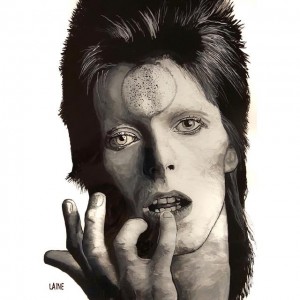 One of the more meaningful awards every year is the People’s Choice Award, voted on by the attendees at the opening night reception. This year Laine Edwards’ Starman, a paint/spray/paint/glass study in black and white was selected this year.

The Frank Stick Show will continue through February 27. A wonderful show and really worth a trip to the Ghost Fleet Gallery.