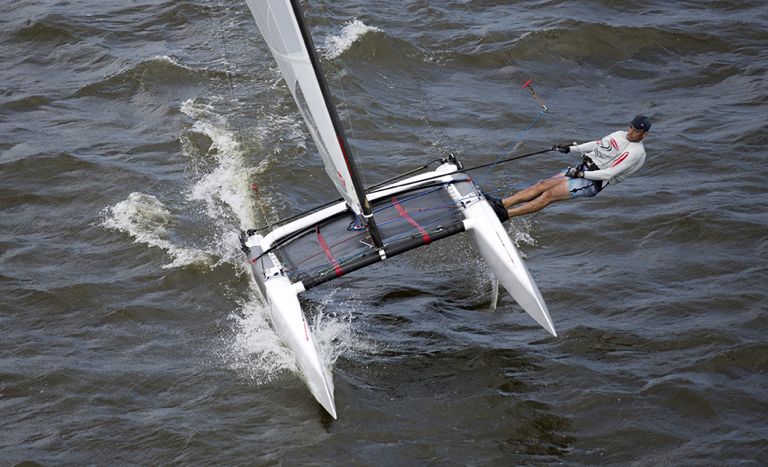 At 18’ the A-Class catamarans are the sports cars of the two-hulled design. Skimming the water with a single sailor at the helm, they’re fast, maneuverable and in the conditions the Outer Banks offered for the A-Class North American Championship, the competition came down to the last race on the last day

Houston’s Bruce Mahoney won the competition by a point, beating out perennial champ Ben Moon by a single point. Moon saw his chances to take home the first place prize diminished when he encountered a typical Outer Banks hazard—he hooked a crab pot in the fifth race of the series.

“After catching a crab pot, I found myself in something like 13th place on the first race,” Moon said.  “I was able to grind back to 5th, but with Bruce winning that race and taking a 2-point lead, I knew my chances of taking my first North American title were slipping away.”

Rounding out the winner’s podium was 18-year-old Jeremy Herring from Florida. Herring designed his boat with his father.

Taking place at the Dare County Airport at the Old Swimming Hole, the race course ran between the Manns Harbor Bridge and the new Virginia Dare Bridge on Croatan Sound. Although from the shore, water conditions often seemed smooth and ideal, the competitors faced two foot swells and some choppy conditions, especially on Friday when winds topped out at almost 31 knots.

Friday was the most difficult day of competition, with a number of boats on their sides and a couple of dismastings.

The regatta was sponsored by SailNC, a new Outer Banks organization whose mission is, “The establishment of North Carolina’s coast and sounds as a sailing destination and hub, through the promotion and growth of all aspects of the sailing industry in North Carolina.”

Almost 50 boats were on the water with competitors coming from Canada and as far away as Seattle. Universal in their praise for the Outer Banks as a destination, runner-up Moon summed up a common view of the venue from participants. “We stayed out at the beach and surfed every morning before sailing, and you just can’t beat that!” he said.