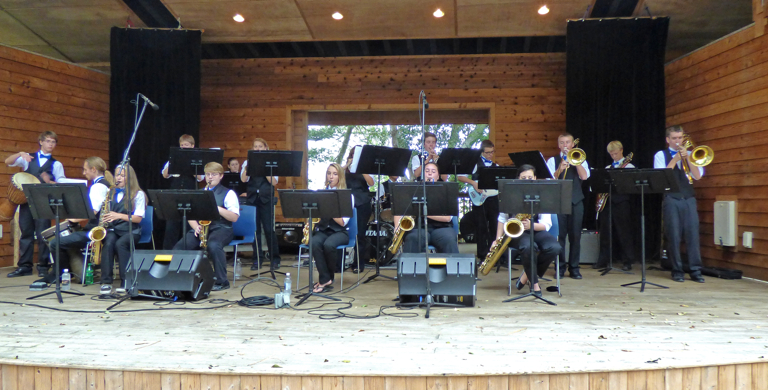 What an amazing week it has been for the First Flight High School music programs–and Dare County school choirs in general.

On Sunday the Jazz Band performed at the Duck Pavilion during the Duck Jazz Festival. The Pavilion is a small outdoor amphitheater that is the perfect setting for the music of the jazz band, and the kids did not disappoint, playing a wonderful variety of sounds with a a number of solos thrown in.

They followed that with a jam session with Jazz Festival headliner, the Delfeayo Marsalis Octet. The kids had had a chance to work with Marsalis in a Friday master class, so they had some idea of what to expect, but it was clear they were thrilled and excited to be on stage with him–and probably a little bit nervous. Nonetheless, the Jazz Band definitely held their own.

It was a great sound, a great time and a true highlight to an amazing day of music. 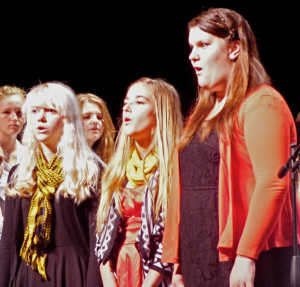 Then last night, Wednesday, the FFHS Advanced Choir, Glee Choir and string orchestra hosted choirs from the middle and elementary schools in the first–hopefully annual–Octoberfest.

A celebration of German based music, the performance levels were surprisingly high.

The string orchestra is not an “official” part of the school’s curriculum, meeting an hour before school three days a week and during one free period. With direction from Cezette Barnes and under the watchful eye of concert mistress Kelly Weisbecker, they performed March of the Meistersingers by Wagner–which is not an easy piece of music.

With so many musical parts on stage during the evening, it is difficult to pick out any one performance that stood out. However, the advanced choir’s arrangement of Bach’s Bist Du Bei Mir truly showcased their talents.