With nearly 300 individual and staff awards, Nighthawk News, the First Flight High School (FFHS) newspaper, and Shorelines, the school’s yearbook, have excelled despite the need for updated technology and software.

Opened in 2004, FFHS is part of the Dare County Schools system, which operates 11 schools from Kitty Hawk to Hatteras. FFHS serves grades nine through 12 and over 800 students from Duck to Kill Devil Hills. The Journalism program at FFHS has been running since the school’s inception.

“Having Adobe Photoshop CS 5 (.5) would be very beneficial in doing cut-outs. Right now it takes anywhere from an hour to an hour and half in CS 2 to do a cut out. While in CS 5 (.5) it takes about 5 to 10 minutes to do a cut-out,” said junior Jordan Hennessy, Nighthawk News Photo and Graphics Editor.

Shorelines faces the same difficulties as Nighthawk News when it comes to the out of date software.

“Our outdated equipment has been a huge problem especially for design. Design is an important element that is needed when creating a yearbook. Our computers are very slow and take longer than usual which makes it harder on me to create the spreads,” said junior Sabrina Ramirez, design editor of Shorelines. “The equipment even killed six spreads after I had spent a whole day at school on one of the teacher workdays (working on them). I had to spend the rest of the week redesigning all of them. Having the older equipment instead of a more updated version is extremely annoying. If I had faster equipment, my job would be easier and faster.”

Despite using antiquated software, high quality products have continued to roll out FFHS’s front doors. According to FFHS Journalism Adviser, Robin Sawyer, who has been at FFHS since the school was built in 2004, evidence of the quality of the publication can be seen in the numerous awards the journalism program has won.

“Quality is job one. Content, writing and design, all three are equally important to the overall quality of a publication,” Sawyer said.

Sawyer herself is no stranger to quality. In 2000, while serving as the Journalism adviser at Manteo High School, Sawyer won the Dow Jones High School Journalism Teacher of the Year.

All 300 plus awards FFHS Journalism has won are merit based and have nothing to do with the size of the school. In both statewide and nationwide competitions, Nighthawk News and Shorelines compete with schools from major metropolitan areas with student populations much larger than FFHS.

National awards such as the Silver Crown, given by the Columbia Scholastic Press Association which is second only to the Gold Crown, bring competition from California to New York. Nighthawk News was one of only 25 high schools nationwide to win a Silver Crown in the 2007-2008 academic school year in which 11 schools received Gold Crowns, making Nighthawk News one of the 36 best high school newspapers in the country. 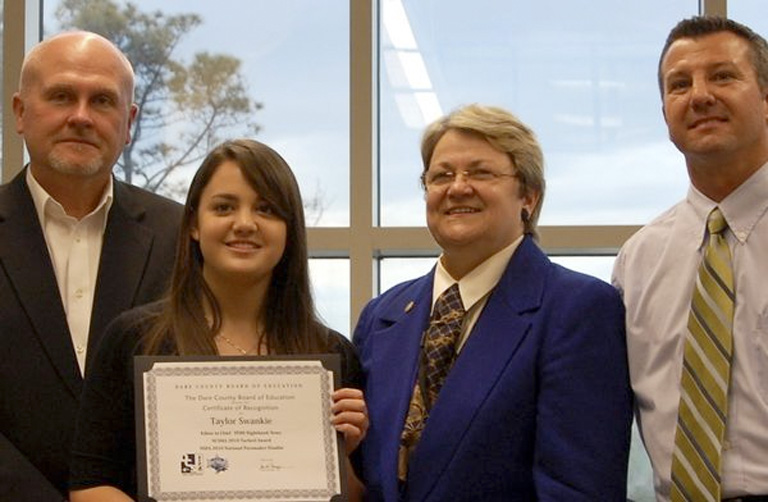 Winning awards provides as sense of accomplishment for the Nighthawk News and Shorelines staffs.

“Awards definitely help keep morale up. And who doesn’t like winning awards,”  said Amanda Slowikowski, editor of Nighthawk News. “Having something to show for a story you wrote, a graphic you made or a picture you took makes you feel good.”

Sawyer’s teaching and expertise in journalism has made a lasting impact on FFHS Journalism staffers.

“Robin Sawyer’s journalism program was an invaluable experience for me,” said former N.C. High School Journalist of the Year, Dani Landskroener, who graduated from ODU and now works in an attorney’s office. “It gave students the opportunity to learn and exercise responsibility that many other extracurriculars do not. It taught me the importance of a deadline and being able to work with others, in addition to improving my writing skills. But most importantly it treated me like a journalist, not just as a teenager or just a kid,”

“Journalism gives you the skills needed to be competitive in college and in a career. For me personally, journalism taught me leadership, communication, and writing skills,” Swankie said. “In high school, it helped me learn the importance of time management and deadlines. It also improved my writing skills. Nighthawk News has opened doors for me in college, even as a freshman.”

Nighthawk News and Shorelines are completely student run and advertiser funded, receiving no money from FFHS or Dare County Schools for printing costs associated with the publications.