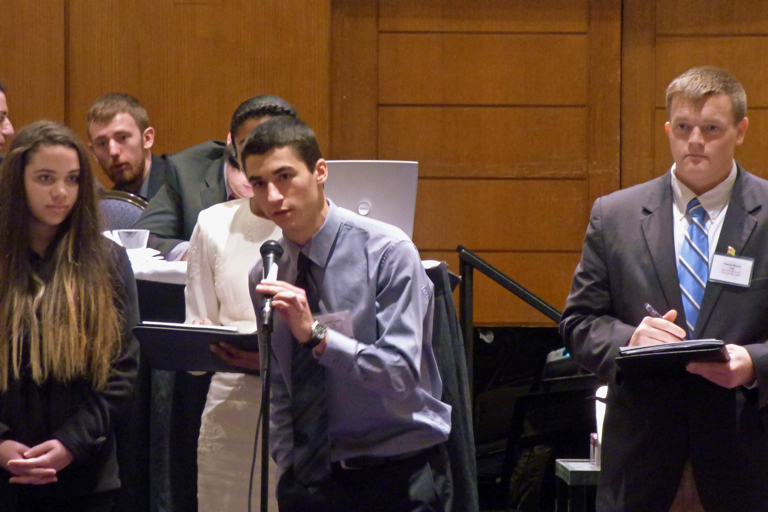 Joseph Lupetin responding to a question about a resolution Togo was co-sponsoring. Trevor Bruce is to the right of him.

For anyone convinced our kids are disengaged, uninvolved and unaware I recommend going to the next Model UN conference as an antidote. The next conference won’t be held for another year, but in the meantime, know this: bring 1200 high school students together from about a 100 mile radius, challenge them to know material and to think for themselves without coaching from anyone, and they will absolutely rise to the occasion.

This weekend the 37th Model UN Conference that ODU has sponsored was held in Norfolk, although this was only the second year for the First Flight High School club. Nonetheless, the Outer Banks contingent was one of the largest at the Sheraton where the conference was held.

Model UN is a program that brings high school students together to enact UN scenarios. Each school is assigned specific countries–in the case of FFHS because our participation was so large, the students represented three nations–Togo, UAE and Belarus.

To be successful, the students must know the positions of the countries on the international scene and be able to present those positions in a public setting. Different rooms have different conferences occurring where resolutions are put forward and voted upon. And just like in the real UN, debate often seems to drag on and on with endless amendments offered. As the day goes on, the sense of frustration among the delegates is almost palpable.

The delegates are presented with real life scenarios. The Security Council–with Grant Keenan and Jake McFarlane representing Togo who is currently on the council–was meeting in response to an Indian Navy sinking of a North Korean freighter. The background indicated that the ship was showing no flag and was ordered to stand by for inspection. The ship fled and in the pursuit was sunk.

Subsequent investigation showed the ship was carrying nuclear materials and weapons bound for Pakistan, and the Council was working toward a resolution supporting India’s right to protect itself and condemning North Korea and Pakistan for violating nuclear proliferation agreements. And then the Russian delegate stood up and pointed out that neither the North Koreans nor Pakistan had signed the Nuclear Nonproliferation Pact.

There were resolutions working through the lecture halls in other parts of the conference that would give the Kurds either their own homeland or more political autonomy and power in the countries in which they currently live. There was a resolution on the responsibility of countries to vaccinate the youngest and oldest of their citizens and a resolution that was an attempt to quantify IED production.

Those are just some of the issues the Model UN was debating. Through it all, what comes across so clearly was 1200 high school kids engaged, excited and challenged–and thrilled to have a chance to think for themselves.

The FFHS Model UN Club pays for everything themselves and parents drive the kids to the conference. Although their are teacher advisers–Susan McFarlane, Adam Herman and advisor Karen Bachman–the students are responsible for their own actions, and they seem to take the responsibility very seriously. A great day to be a parent and know that our kids really do understand the world around us better than we sometimes think.