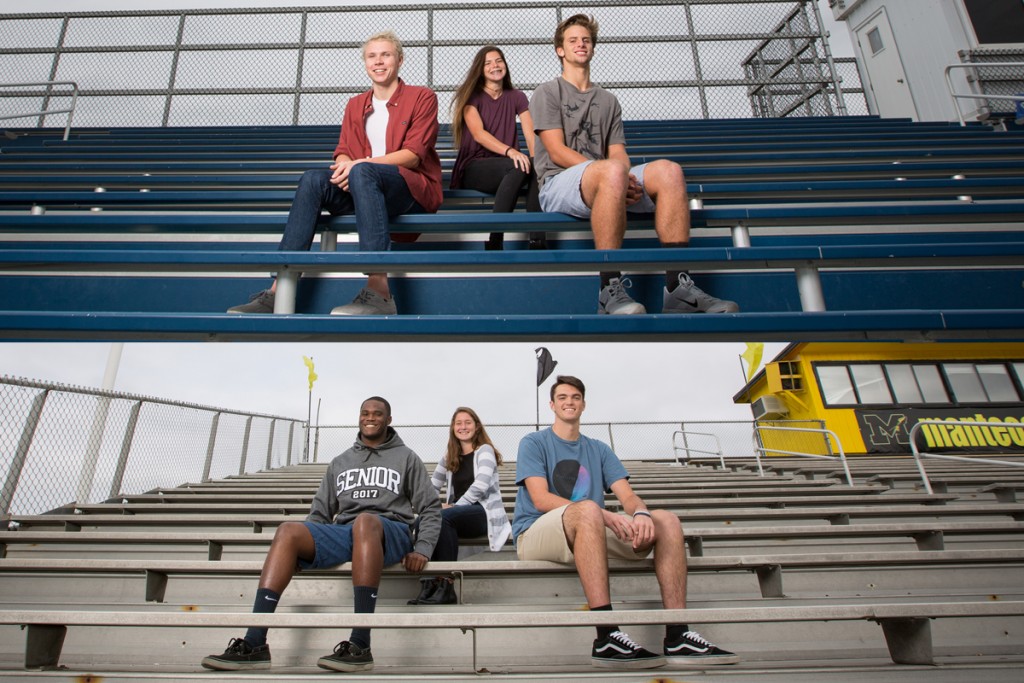 First Flight High School junior Alex Rodman remembers as a child racing the boys on the blacktop during recess—and winning. Classmate Braxton Hughes recalls playing a sport from about the time he was able to walk and throw a ball. And for Manteo High School senior Lindsey Jones, her first memory of soccer is playing goalie in second grade and watching every single ball go by her.

Like Rodman, Hughes and Jones, many of Dare County’s stellar student athletes have memories of how they first fell in love with the sports they now excel in, stories of coaches who encouraged them and examples of how they’ve come out ahead. But regardless of their sport, the athletes in this group also seem to have something else in common. Some focus on one sport, many on multiple sports, but whatever these students do, they are exemplary whether on the playing field, in the classroom, or out in the community.

Alex Rodman began running for the First Flight Middle School track and field team in seventh grade and found she exceled in the mile and 800-meter events. “In ninth grade, I was asked to join the cross country team,” says Rodman, who has played soccer since she was young and is now the captain of First Flight’s varsity girl’s soccer team.

In February of 2016, Rodman won the 1,000-meter event at the NC 2A Indoor Track State Championship in Winston Salem with a time of 3:02, smashing her previous personal best of 3:11. She also earned her State Ring.

“I like the competition and I like winning,” Rodman says. “I also love being in shape and love the team atmosphere. Being on a team is an experience everyone should have in high school.”

During the spring, Rodman plays varsity soccer and is a member of the track and field team. Last year, she was part of the four by 800-meter relay that placed third at the NC 2A Outdoor Track State Championship.

Rodman was also a regional cross country champion during the fall of 2015.

She stays busy off the track as well. She is Junior Class President at First Flight High School and a member of the environmental club, the Phytofinders Club and the Nighthawk News school newspaper.

Her advice to incoming freshmen: “Don’t be afraid to test yourself.”

“You have no idea what will happen,” Rodman says. “I never guessed I would win the state championship. I didn’t even know there was such a thing, but it will probably help me get into college.”

FFHS Athletic Director Ray Scott says Rodman excels in whatever she does. “Alex is probably one of the most talented female athletes we have. She runs long and short distances and is an exceptional soccer player,” he says.

Braxton Hughes, a FFHS junior, is not sure what sport he’d like to pursue in college. He has his pick.

In the spring, Hughes plays for the school’s baseball team as catcher, third base and outfield. During his sophomore year, he was chosen for the All-Conference Team and was the recipient of the Nighthawk Award his sophomore year. The award is given to an athlete who demonstrates exceptional leadership skills, sportsmanship and team work.

Hughes also plays quarterback for the FFHS football team and center for the basketball team. He received the Most Improved Player award in both basketball and football while at First Flight Middle School.

Hughes says football coaches Jim Prince and Tommy Rhodes have been instrumental in helping him in the sport.

Off the field, Hughes taught himself Spanish so he could talk with his friends and classmates. He’s now learning Italian. He also spearfishes, surfs and plays piano.

His advice to incoming freshmen is to work hard in whatever you do. “And don’t take your high school years for granted,” says Hughes. “Enjoy it for as long as you can.”

“I’ve noticed this since he was in ninth grade. He’s smart and is probably one of the hardest working athletes we’ve had at this school.”

Hunter Crook, a FFHS senior, swims for the Nighthawk’s swim team as well as the OBX Swim Club. In March of this year, he qualified and competed in the NCSA Junior National Championships in Orlando, Fla. and earned his personal best times in the 1,000-yard, 1,500-meter, and 500-meter freestyle events.

The Junior National Championships is the competition just shy of the Olympic Trials.

“It’s always been a goal of mine to make it to Junior Nationals,” says Crook, who practices in the pool three hours a day. Crook was eight years old when he joined a neighborhood swim team in Charlotte, but began swimming competitively in 2010 when he became a member of the OBX Swim Club.

“Hunter is a highly driven athlete who puts in a lot of work,” says First Flight Swim Coach David Elder. “He enjoys swimming hard and being part of a team.”

Crook is looking at a few colleges, including Queens University in Charlotte, N.C., Seattle University, Cleveland State University and Florida Atlantic University. “I’m waiting to see what I’m offered as far as scholarships and how I fit into the team,” says Crook.

Outside of the pool, Crook competes in local half marathons and triathlons, and as part of an internship, he works with English as a Second Language students at First Flight Elementary and First Flight Middle schools. He says he hopes to eventually go into the Peace Corps.

Shumure Flowers is a senior at Manteo High School and has been playing basketball and football since he was in fourth grade. Coming from an athletic family, he says his parents always encouraged him and his siblings to play sports.

Flowers also excels on the basketball court, playing forward for the high school’s varsity team. He is a member of the school’s Friends of Rachel and the Fellowship of Christian Athletes. Flowers plans to attend either Appalachian State University or N.C. Central University where he hopes to continue to play club sports.

Flowers says he would encourage freshmen to play a sport every year. “If you didn’t play the year before, you will regret it. During every game, they remind us as seniors how many games we have left.”

MHS Athletic Director Alfie Wheeler says he has had Flowers in the classroom for the past three years. “He is one of the hardest working young people I know, both in the classroom and on the field. The kids look up to him.”

Lindsey Jones, a MHS senior, plays center mid or striker for the Redskins women’s soccer team. She also plays for the tennis team and is considering going out for basketball this year as well.

Jones was captain of the varsity team last year and hopes to be again. She led her team to win the conference as a freshman and then again as a junior. While she wants to continue playing soccer in college if she gets a scholarship, Jones plans to focus on her academics and pursue a career in graphic design. Savannah College of Art and Design and Appalachian State are among the colleges she’s interested in.

“Soccer was an easy way to get daily exercise and I found that I had a talent in it,” says Jones, adding that one of her most inspirational coaches is Erin Groat of OBX Storm Soccer. “She’s the first female coach I’ve had, and I’d rather have a woman’s point of view as far as the sport.”

Her advice to incoming freshmen would be to have respect for their coaches. “When I get mad out on the field, it’s at myself,” says Jones. “But I’ve learned confidence in myself and what I do out on the field, and that’s a big issue in women’s sports.”

Jones is MHS’s spirit chairman and has applied to be a member of the National Honor Society.

Wheeler says Jones is extremely motivated and has taken on leadership roles on and off the field. “She leads by example,” says Wheeler.

MHS senior Chandler France remembers watching his father and grandfather play golf when he was five or six years old. “I just started playing around and got hooked,” France says.

By the time he got to middle school, he was winning awards, earning Most Valuable Player during seventh and eighth grade. He was named most improved in ninth grade and MVP again in eleventh grade.

“I’d like to keep playing as a hobby when I graduate,” says France. “I like it because you have to be mentally tough. Golf makes you think strategically.”

The coaches who have inspired him most are Bud Hendrix and Eddie Francis. But golf isn’t the only sport France plays.

He has also played basketball for MHS since his freshman year and earned Most Improved Player last year. France is member of the National Honor Society and hopes to attend UNC Chapel Hill next fall.

“Chandler is a great role model. He’s a good athlete and a good person,” says Wheeler. “He does tremendously well in the classroom.”

France says he would encourage students to appreciate their high school years. “Enjoy every moment and embrace it because it flies by.”

And for these Dare County athletes, there’s no doubt they are doing just that.