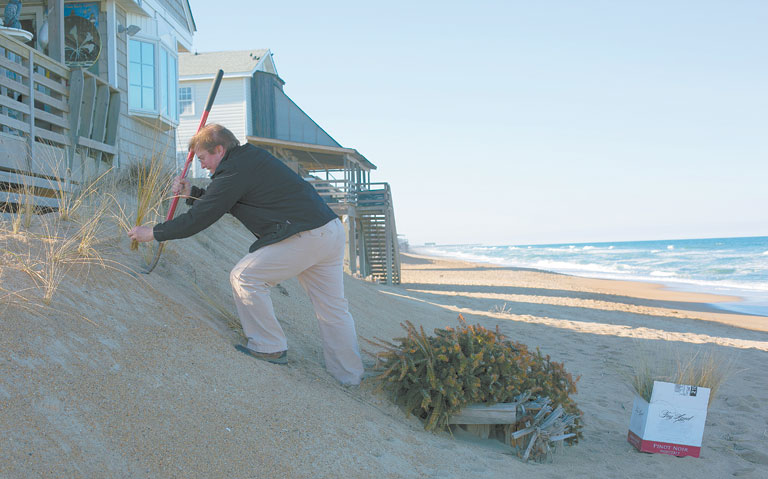 Donny King, owner of Ocean Boulevard in Kitty Hawk, wants your Christmas trees, and he doesn’t plan to take them down any time soon.

Life on a sandbar is rarely dull, particularly when your livelihood sits just yards from the Atlantic Ocean. To make things a little less lively, Donny has put into practice an innovative approach to beach maintenance—a practice that works with the forces of Mother Nature for a result that is long-lasting and green—literally.

Following the example of several projects in beach communities in New Jersey and North Carolina (including Jockey’s Ridge), in 2012 Donny began strategically placing discarded Christmas trees along the dune line of the beach to trap sand and slow the effects of wind and water eroding the beaches. The community response has been quite favorable; it is a popular topic of conversation with the clientele at the restaurant, and the word is spreading. “I want to keep the conversation going; it really brings out the positive,” Donny says.

When he posted a picture on Facebook of Boy Scouts hauling trees on the beach, the photo was shared over 500 times on the first day alone. He offered gift certificates to anyone who dropped off their tree. The first year he got 100 trees; this past year around 70.

Although in Kitty Hawk a permit isn’t necessary, he advises anyone thinking of a similar project to “ . . . use your town resources for guidance. It’s good to know what you’re doing, have it researched and have an organized effort so you will know what you want and how you’re going to achieve it.”

Donny hasn’t limited his efforts to Christmas trees; every winter he also transplants American Beach Grass from his own backyard, estimating 3,000 sprigs this year transplanted by him, family and friends.

During his tenure at Ocean Boulevard, the hurricanes that caused the most impact have been Isabel, Sandy and Irene. With Isabel, waves pounded the building resulting in extensive physical damage with days of flooding. “It’s a real slap in the face when you haven’t maintained the beach and the big storms come, and show you how ineffective our resources have become,” Donny says.

In contrast, when Sandy struck in late October of 2012, oceanfront neighbors across the street had built up the dune line and the town had pushed sand to create a berm following Isabel. The results were tangible. Although he saw major flooding during the storm, it was limited to around three hours surrounding high tide with significantly less damage.

Increasingly Dare County is moving forward with beach mitigation plans that include nourishment, and Donny commends the county for the effort and planning they are putting into it. Nags Head has already nourished their beaches and every beach town, with the exception of Southern Shores, has entered into an interlocal planning and funding agreement with the county.

According to Donny, the county is funding from 50% to 75% of planned beach nourishment costs, making it significantly easier for individual towns to raise the remaining funds. While the proposed tax increases have caused debate, he says, “It’s the only legal way to do it given our present governmental structure. The most consistent argument against planned beach nourishment is financial, but I’ve personally only heard of about 10 people who oppose it.”

No official alternative suggestions have been made thus far, and opposition lacks organization or a “concurrent theme,” according to Donny. Some, he says, have proposed outdated tactics that are no longer viable.

He also points out that it’s not just an issue for owners of property in close proximity to the ocean. “We are a beach community; Irene affected the sound side terribly, but we still had places to work, shop, support businesses and rebuild.” He’d like to see both east and west sides of the community work together and understand how they affect each other.

When asked if he has any plans to get involved beyond this and run for a public office, Donny laughs and says, “I’m in the restaurant business, and really—I don’t get up early enough for all of that! If you ask me personally why I’m interested in this, it really didn’t start with Ocean Boulevard. . .In 1998, I drove to the Eastern Shore in Maryland; it felt barren, and not well kept—you could see the lack of prosperity. I really felt that this is what the Outer Banks could look like after 1 or 2 major storms, and I want us to better protect ourselves better.”