Edward Greene Citizen of the Year 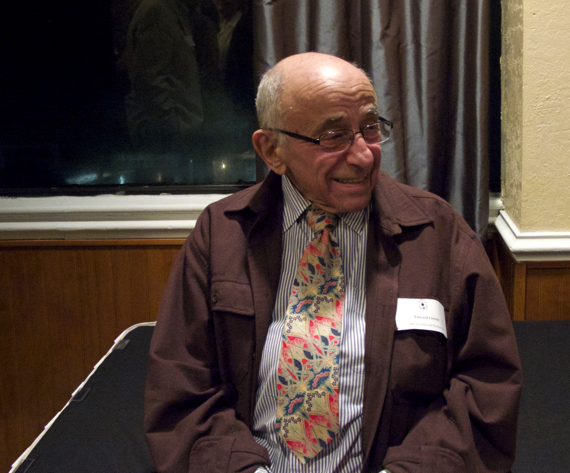 Edward Greene, 90 years young at the Chamber of Commerce Citizen of the Year banquet.

Communities invariably have living treasures in their midsts. For the Outer Banks one of those treasures is Edward Greene—owner of the Christmas Shop, philanthropist, lover of life and so much more.

He was honored last night—Thursday—as the 2015 Citizen of the Year by the Outer Banks Chamber of Commerce, an award that could hardly have been more deserved and is surprising only because it had not been awarded to him earlier.

He’s closing the Christmas Shop, shuttering the doors on an icon of the Outer Banks community because, as he says on the company website, “ . . . I am 90 years young.” So after 48 years, families that have crossed the Wright Memorial Bridge and made a beeline for Manteo or ended their vacation with an ornament will have to find a new place of Outer Banks memories.

Yet to look at Greene’s life solely through the lens of his Christmas Shop is to miss a life of remarkable achievement and purpose—a man who embraces life and the Outer Banks with a joy that spreads to everyone who knows him. To Greene his shop was just one part of a much larger picture, a springboard to a better and healthier place to live. 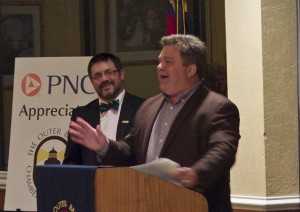 Speaking to a packed room at the Ramada Inn in Kill Devil Hills, Carl Curnutte, executive director of the Elizabethan Gardens, delivered an emotional recap of Greene’s life and what he has meant to the Outer Banks.

“In Edward we have just the man who sees the whole. A man who stands for the community and all things that bind us as a community,” Curnutte said.

The image that emerged as he spoke was of a man who has given so much to his community and has received as payment so much love and respect that it is hard to quantify.

Edward Greene was one of the founders of the Outer Banks Community Foundation, the local charity that has touched almost every person’s life on the Outer Banks. An accomplished dancer, he spent a number of years performing in the Lost Colony and was its assistant choreographer for a time.

As Curnutte noted in his remarks, he never forgot that experience, becoming a mentor to many in the troupe over the years or offering a job at the Christmas Shop as young actors struggled to make ends meet.

He served on so many boards and founded so many businesses that are still with us, that they can’t all be listed, but his influence can be seen in almost everything that we see in this community as making it a better place to live. He founded newspapers, he sat on hospital boards, he created the New World Festival of the Arts that has been a part of Manteo’s summer for over 30 years.

His employees from the Christmas Shop were there—Richard Lacerre, “My very first employee,” was at the table—still working with Greene and still one of his biggest fans. There were two tables of the women who have worked in his shop over the years.

For them he gave a special salute. “When I was growing up I used to hear people say, ‘Behind every successful man is a sharp and a lovely lady.’ But I didn’t know how blessed I was. Sitting at both tables all the ladies have been part of my life. . . I would never have made it if it wasn’t their belief in what we did. . . I salute both tables full of long time friendships with beautiful women.”

And then there was his humor. Taking the microphone he said to Curnute, “Carl, you made me want to meet someone like that.”

To Curnutte who said it, though, and the people who have known Edward Greene over the years Carl’s description of this remarkable man seemed to ring true.

“They say a truly happy person is one who enjoys the scenery on a detour. Boy is that Edward Greene.”