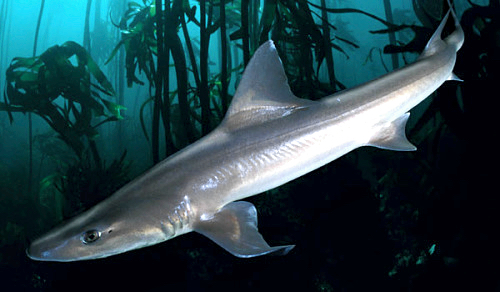 Smoothhound shark in subaquatic vegetation. The most prevalent shark in the Outer Banks sounds.

There’s not much reason for concern since there’s almost no chance of human/shark interaction, but there are sharks in the sound.

That was some of the findings that Chuck Bangley, a doctoral student at ECU who is studying shark behavior, discussed in his talk at the Coastal Studies Institute on Tuesday night.

Sharks in Outer Banks sounds have come to the forefront of thought with the appearance of Katharine, a 2300 pound great white that was tagged in 2013 and made her way to the mouth of the Pamlico River in January of this year. 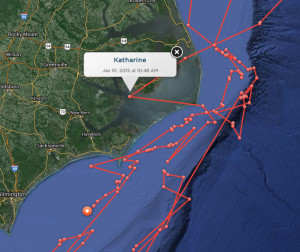 The travels of Katherine the great white shark.

Sharks, though, have always been in the sounds of North Carolina. At the beginning of his talk Bangley showed an etching of Native Americans fishing in the Roanoke sound that seemed to show a small hammerhead shark by the boat. Hammerheads do seem to be very rare in the sounds.

Bangley has been studying shark behavior for a number of years and what he has found is interesting and informative.

Different sharks like different environments—that was very clear from the data Bangley shared. Some sharks like colder water, some a bit warmer; larger sharks like deeper water and higher salinity.

The exception to all of this is the smoothhound shark, also known as a smooth dogfish—and yes, a dogfish is a shark. Very small teeth and not all that aggressive, but it is a shark.

The smoothhound shark was landed in every season and more than four times more of the species were caught by Bangley than any other shark. The spiny dogfish was the next most prevalent.

There were a number of other shark encountered in the Pamlico Sound, where most of the work was done. Over a two year period, Bangley and his team landed over 2200 sharks, the majority smoothhound sharks—over 1300. Other than dogfish, blacktip sharks, sandbar sharks, bull sharks and Atlantic sharpnose sharks were landed in sufficient quantities to gather data.

What became clear as Bangley talked is how different the preferences of the species are. Blacktip and Atlantic sharpnose sharks like higher salinity; smoothhound sharks like the subaquatic vegetation beds in the shallows.

“Most of our shark species showed up in the summer,” Bangley said. “Interestingly sandbar sharks were almost a fall specialist. This species tends to overwinter off North Carolina then leave when the water warms up.”

Bull sharks seemed to have one of the more interesting stories associated with the research.
“The bull shark is a really interesting one,” Bangley said. “Bull shark likes warmer temperatures. It is really only found in temperatures over 22.8 degrees Celsius (73 degrees F).” The shark also likes to be in an in-between zone of salinity—not quite brackish and not as salty as the ocean.

One of the areas researchers found the most bull sharks was along Long Shoal River. “It sits on the dividing line between Dare and Hyde County. Pretty much all the land around it is encompassed within Alligator River National Wildlife Refuge,” he said.

“It is interesting that bull sharks tend to be where people aren’t,” Bangley added.

There seems to be a change in behavior associated with bull sharks—and it may be related to a warming trend seen in the waters of the sound.

Before 2011, bull sharks were rare in North Carolina sounds, but since that time they have become more prevalent. “It’s really interesting that suddenly, boom, we have bull sharks.”

What is particularly interesting, though, is many of the bull sharks being caught are neonates (less than one year) and juveniles. “The Neonates and juveniles show up in May. They really peak in June,” Bangley said. “And May and June is the pupping season in both Gulf Coast nursery habitats and Florida nursery habitats.”

Bangley became curious about why so many young bull sharks were showing up and he started taking water temperature measurements in Pamlico Sound.

The temperature in the sound is changing—although it’s not as clear as it may seem. Spring water temperatures are increasing; summer temperature seem to fluctuate—but overall since 2005, “Temperatures increased 4.38 degrees Celsius from 2005 to 2014.”

The still very preliminary conclusion? “We can’t make any hardcore conclusions from this until we get more data,” Bangley said. “So it looks like from here we can hypothesize the juvenile bull shark presence is driven primarily by temperature and salinity in Pamlico Sound and this matches well with what drives bull shark presence in other bull shark nurseries as well.”

An interesting hypothesis and a window into a rarely seen part of the environment.

Chuck Bangley’s discussion was part of a monthly series, Science on the Sound, the CSI is hosting. Next up Jessica Taylor talking about her studies of dolphins in the sound. May 21 at 6:00 p.m.