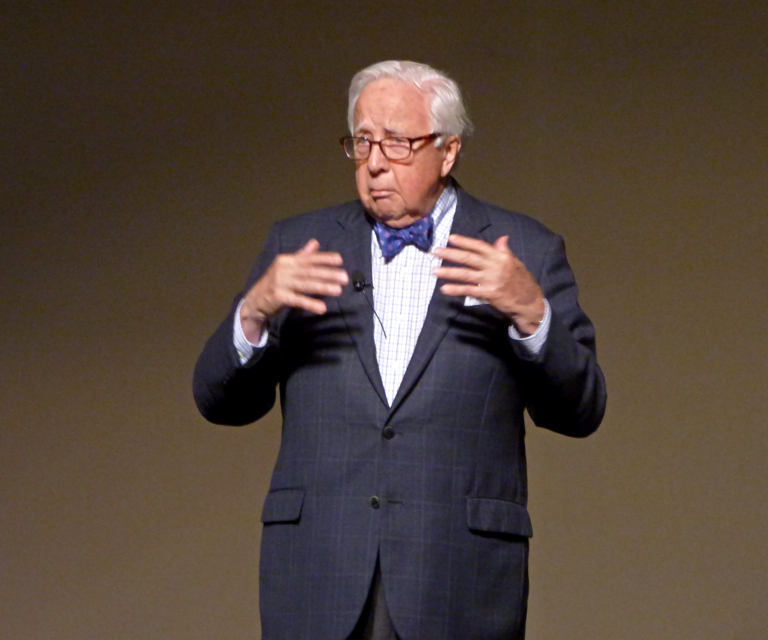 Filled with insight into the writing and research process, McCullough’s presentation was an engaging evening filled with humor and insight. Although speaking specifically about he constructs a story, his description of the importance of setting to character could have been part of any seminar on good writing.

He spoke at length about the genius of the Wright Brothers–pointing out that although neither one had finished high school, these were investigative scientists of the first order. They took nothing for granted, tested every hypothesis, and when the evidence proved accepted theory wrong, they had the courage to test their own theories, prove them and then use them.

Yet they were not self-made men, and McCullough emphasized that point in his talk. “There is no such thing as a self-made man or a self-made woman,” he said, noting that all of us are the sum of the factors that make us who we are.

He pointed out that Bishop Wright, their father, believed unfettered access to knowledge was the key to intellectual growth. “They lived in a house where books were everywhere,” McCullough said. “He (their father) encouraged them to read about everything. He wanted them to have open minds.”

Although the lecture focused on the Wright Brothers, perhaps more fascinating was McCullough’s description of how he has created some of the finest books of history and biographical novels every written. It is the tidbits of personality that often create the character that lives in our memories.

His biography of President Truman is considered one of his finest works, and hearing McCullough describe the president, brings him to life. Truman, like the Wright Brothers, never finished high school. And like them, his was a towering intellect. An example? According to McCullough, President Truman read Latin for relaxation.

In an evening of true intellectual stimulation, it is difficult to find a highlight, but the first public reading of a excerpt from his Wright Brothers biography was exciting. He read from the chapter about December 17, 2003.

David McCullough’s lecture is part to the Don and Catherine Bryan Cultural Series. The next scheduled event is an evening with North Carolina Poet Laurette Joseph Bathanti on November 15.