Daredevil’s Baseball Is Back on the Outer Banks 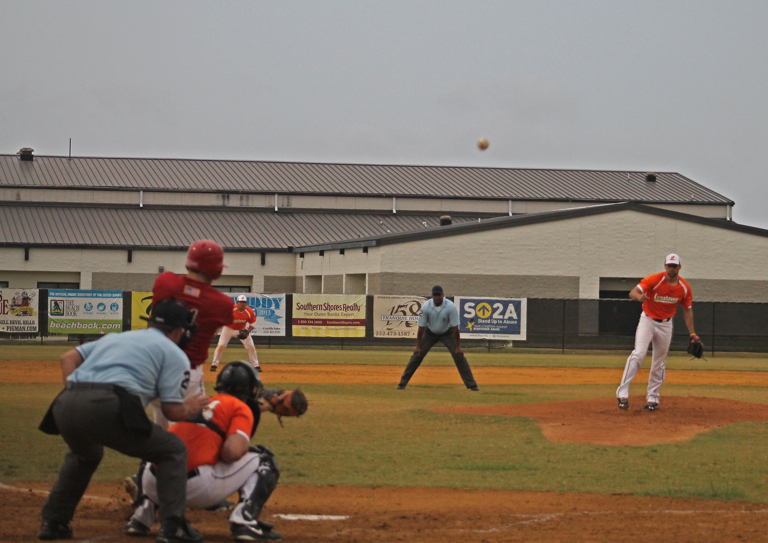 Outer Banks Daredevils’ Will Connerly driving in a run.

There is something about baseball that captures our imagination. Maybe it’s the memory of a perfect pitch, or the one moment when you truly were the hero of your own story. Perhaps it’s the smell of the grass and a dusty infield on a warm summer’s night, or an evening with your family when parents were heroes and answers were black and white.

There is no one reason for the draw of the game, this need to keep coming back time and time again to a ball field where so much of our dreams are held.

Will Connerly is one of the lucky ones . . . one of the few who have the skill, the desire and the love of the sport to play the game through the college season, into the summer and back to the fall college schedule. He’s a first baseman, catcher and sometimes outfielder for the Outer Banks Daredevils, a kid with a sweet swing, a great attitude and a love for baseball. “Doing it is just normal for me,” he said. “I would feel weird if I didn’t play baseball.”

He’s a redshirt junior playing for VMI (Virginia Military Institute) during the school year, but this summer Connerly is here on the Outer Banks working on the skills he’ll need to get to the next level. “That’s my goal,” he says, when asked about professional baseball.

The Daredevils play in the Tidewater Summer League, a six team wooden bat league that exposes college kids to a style of baseball that is more traditional than the aluminum bat type of game played in college, a style much more similar to professional ball. “Everybody is here to work on certain things,” Connerly says.

The coaching staff seems ideal for developing players. Head coach, Jim Dougherty, came up through the Astros organization and spent four years in the major leagues as a middle reliever. Assistant coach, Clint Johnston had 10 years of professional baseball experience before moving to the Outer Banks.

“We have two coaches who played professional ball,” Connerly says. “They understand it’s more about the process than results right now. It’s a great time to work on stuff.” Then he adds, “But the team still has to win.”

The team has been winning. General Manager Michael Dooley has put a good competitive team on the field, winning the first half of league play and getting ready for the second half of play.

Dooley, with partners Donnie Just and Mark Milam, brought Daredevil’s baseball back to the Outer Banks after a one year hiatus for a simple reason. “We’re all baseball guys and we missed it,” he says. “We’re just happy to have them there on the field.”

The team plays at the First Flight High School complex in Kill Devil Hills. It’s a spacious, beautiful park—so spacious that homeruns are a rare and treasured moment. A wonderfully protected environment, it is the kind of place parents can feel safe sitting in the stands while their kids wander around the grounds. Because games are played on school ground, the sale and consumption of alcoholic beverages is prohibited, but that adds to the family feel of an evening of Daredevil’s baseball.

The idea of a game as a family activity is a concept the team seems to have absorbed. “A lot of it is for the kids,” Connerly says. “To them we’re superstars.”

Ticket prices are low ($3.00) and concession prices very reasonable—so low, in fact, that a family of four could have a great time at a game for $40 or less. There are, of course, the typical hot dogs and burgers, but true to the Outer Banks fishing tradition, fresh rockfish and tuna sandwiches ($6.00) are also available.

The team plays Tuesday, Wednesday and Friday through the first week in August. Game time is 7:00 p.m.