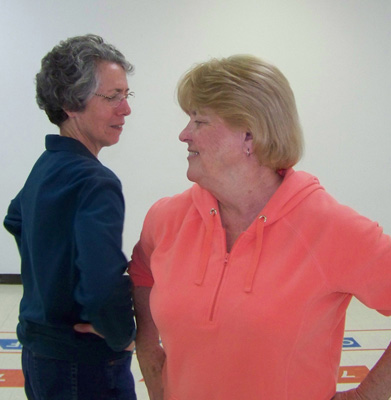 Parkinson’s Disease is humor and laughter. It’s frustrating at times, irritating – especially when being patronized by the well meaning – and somewhat aggravating. It’s all of those things and more, but what it is not, is a sentence to  live a life in isolation and solitude.

Kurt Link is a Doctor of Internal Medicine – retired now. He lived and practiced medicine in Richmond until moving to the Outer Banks eight years ago. “I’ve had Parkinson’s for the last 20 years,” he says. “It’s a very complicated relationship.”

“It’s all caused by variations on the same molecule,” he explains. “But it doesn’t kill you. And the medicines are effective. Without them you would be bedridden.”

“That’s one of the morbid jokes about Parkinson’s,” Link explains. “The problem with the disease is that it doesn’t kill you.”

It is an odd disease, in some ways. It manifests itself differently in different people and at different times. Sometimes the brain signals a foot or a hand to move and for some reason, the signal just doesn’t get there. Or sometimes the signal becomes distorted and legs, arms, hands twitch uncontrollably.

First conceived in 2008 by the Mark Morris Dance Group in Brooklyn, NY, Dancing with Parkinson’s takes the movement of dance and applies it to people with the disease. The movements tend to favor slower actions and stretches, but it is unmistakably dance. And the results are remarkable. “It seems like one of the great oxymorons,” Link says. “But it’s like you’re floating in space.”

Meeting in the Baum Center every Monday morning for the past year, the group is led by local dance instructor, Roberta Graves. Taking the class through a series of slow stretches, she warms everyone up. Then a couple of songs, and then the dancing.

This is about movement, and the dances tend toward slower, more graceful steps. A minuet (complete with bows), a line dance of sorts. And laughter everywhere. I was getting names and was confirming what I had heard. “Anne Tremble,” I was told. A raised eyebrow from me in question. “Tremble. Just like we do,” said Carol Long.

The movements of the dancers are graceful… and it is as Kurt Link describes it. “Floating in space,” he had said. No sign of the tremors or frozen muscles. Just 10 people relaxed and moving as they smoothly as they remembered.

After watching a television documentary about the program, and a conversation with Carol Long who has Parkinson’s, the group was started by local artist Tracy Price.

Although Dancing with Parkinson’s is growing in popularity, the program is still relatively rare, especially in this area. “There are only three in North and South Carolina,” Price remarks.

For more information about Dancing with Parkinson’s at the Baum Center, call Tracy Price at 252-480-9531.