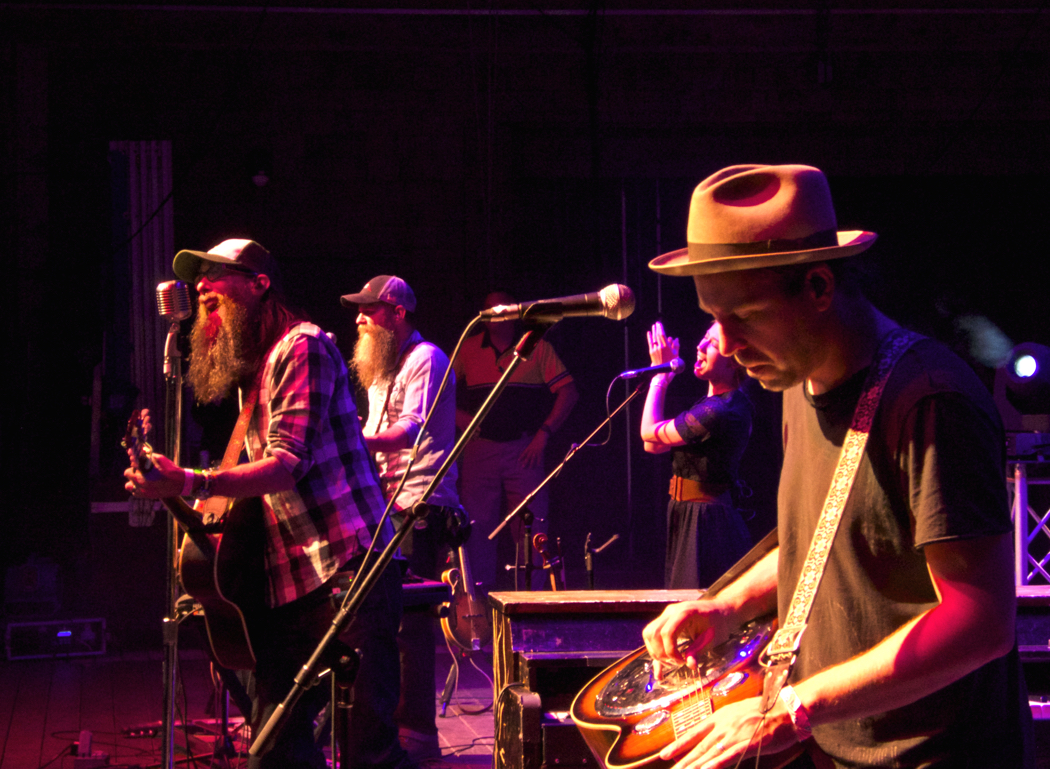 David Crowder is all about religion—maybe even old time religion, since at one point in his Wednesday night concert at Roanoke Island Festival Park he gathered his musicians around one mike and sang “Give Me That Old Time Religion.” More on that later.

His music, though, doesn’t have any of the sound of old time religion and only sounds a little bit like modern Christian rock. His music and performance stand up to any music anywhere—his arrangements are innovative, songs tuneful and his performance is energetic and fun.

The lyrics to his songs are certainly oriented to Christianity and religion, yet if his lyrics can be categorized, his musical style transcends any one genre. There are clear elements of bluegrass in it, but throw in a synthesizer pumping out a strong bass line, a rock drummer and electric guitar, and the sound transforms.

The instruments he uses on stage help to create the very different sound he seems to want. There are two drummers—or percussionists, perhaps. Drummer one is all about laying down a rock beat. Drummer two—who is center stage, is decked out with a big bass drum that reads “Crowder Feed & Supply.” At his feet are some of the classics of a bluegrass rhythm section including a two gallon kerosene can . . . empty, hopefully.

His guitar player shifts back and forth between guitar and a mandocello, which is a mandolin that is tuned like a cello. David plays guitar and banjo. The band also brings out a mandolin from time to time.

There is also a violinist—at least it was a violinist last night. Crowder mentioned she either plays fiddle or violin depending on how she was dressed, looked at her skirt and heels and declared, “She’s playing violin tonight.”

The road crew really gets a workout, the musicians switch instruments mid song a number of times and it’s the road crew that beings the new out and takes the old away.

Crowder is not afraid to take a chance and that keeps things fresh and interesting. “Lift Your Head Weary Sinner” is certainly one of the heavier songs he performed in his show. To get the effect of the weight of life, the violinist, who does not have a part in the song, drops heavy chains on a metal wash tub. Although the song with minor chords falling heavily in strict rhythm would seem to bog the arrangement down, he keeps things moving with a syncopated drumming pattern. 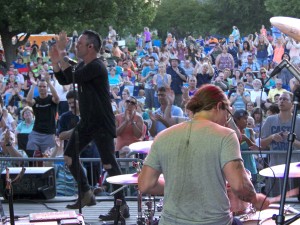 There is humor in Crowder’s performance as well. Noting that he had never been to the Outer Banks before, he wondered “If we could all go down to the ocean together and sit around and sing.” Recognizing that wasn’t practical with the 2000 or so in attendance, he instead gathered his band around one microphone and performed a simple but wonderful version of “Give Me That Old Time Religion.”

Finding Favor was the first group to take the stage. A classic Christian rock sound, they were very good. The last song they performed, “Be Like You” is a tender ballad about a father’s yearning to be the example his baby needs. Highlighting lead singer Blake NeeSmith’s voice, the song was fitting finale to their set.

It was a great evening of music in what is certainly one of the most beautiful outdoor concert venues anywhere. The turnout was fantastic and with a full schedule of concerts for the summer, it looks as though Roanoke Island Festival Park is on a winning streak. Next up, Rhonda Vincent and the Flame at the indoor theater Friday, July 1.