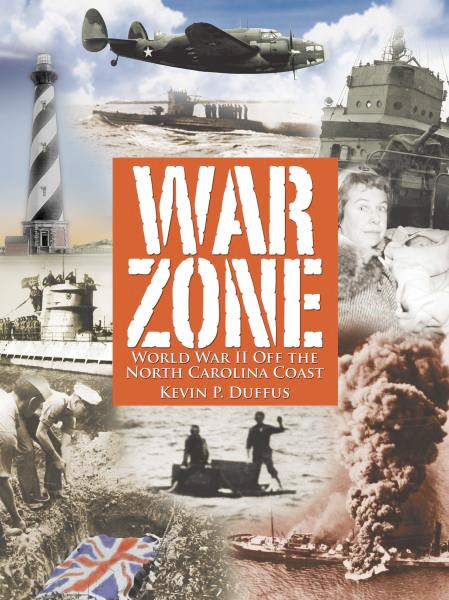 Kevin Duffus, author of several books on Outer Banks history, has researched extensively the U-Boat action off the North Carolina coast, and in War Zone: World War II off North Carolina’s Outer Banks presents a fascinating and enthralling account of the events that shaped, and in many cases, ended along our coast.

While many have heard that German U-Boats launched an offensive against Allied ships off the East Coast during World War II, most do not realize the true extent of the attacks nor the effect they had on individuals.

In 1941, German military forces determined that the vital pipeline of ships coming across the North Atlantic and keeping the British in the war needed to be curtailed.  A fleet of U-Boat set out late in the year to begin an offensive, starting in 1942, to sink as many ships on the U.S. East Coast as possible. The bigger the ship, the bigger the recognition – there was no discriminating between military or merchant vessels. It was found that the prime waters for finding and sinking ships was that off the North Carolina coast.

First-hand accounts from survivors, as well as the sailors and merchant marines who manned the ships, bring to life harrowing tales of unexpected explosions from U-Boat missiles, fiery oil slicks covering ocean waters and days adrift at sea in rafts and lifeboats.  Duffus balances each heart-wrenching story of lives lost with one of strength, hope, and ferocious courage in the face of a hidden enemy.

Outer Bankers themselves provided a crucial role in helping the Coast Guard and Militia men stationed in Hatteras and Ocracoke. Locals ran transportation services where no roads existed and provided housing to enlisted men. Some volunteered for the government and Coast Guard to keep watch out for suspicious visitors or signs of U-Boat activity off the coast. Members of the community joined together to comfort one another while they watched helplessly as the ocean horizon was dotted with fires and the noise of explosions woke them at night. It became common to find debris and oil washed up on the beaches.

Duffus emphasizes facts, making sure to dispel or correct myths that have grown up around the events that occurred here. He sets to right the stories that U-Boats were signaled with morse code from a conspirator on the beach, a secret Nazi spy ring was active in Hatteras, or that periscopes could be seen mere feet from the waterline. He even sets to right the legends surrounding that most famous of Outer Banks children’s books, Taffy of Torpedo Junction by Nell Wise Wechter, long believed to be based on hard facts of a young girl who discovers a group of Nazi’s hiding in Hatteras.

While the Nazi U-Boat offensive was short-lived, ending in less than a year, its impact was wide-ranging and the accumulated damage is considered one of the worst hits the U.S. military has ever taken. It has taken many years for the full extent of the attacks to emerge– the government, hoping to bolster American morale, tried to keep the events off the Outer Banks coast out of the news. But in War Zone, Duffus brings this piece of American history into full focus, providing an accessible and engaging accounting that will appeal to military history buffs as well as lovers of the Outer Banks.