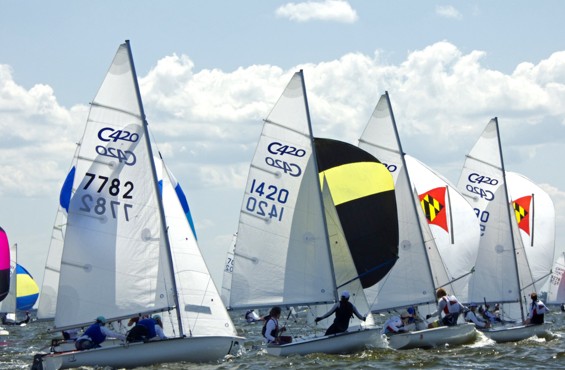 Wind at their back and Spinnakers set at the Club 420 Nationals.

There are 78 sails stretched across the horizon with the Virginia Dare Bridge leading onto Roanoke Island as a back drop. The sound of a nautical horn echoes across the Croatan Sound and to the unpracticed eye the confusion of sails seems a general melee.

To the practiced eye, though, there is strategy and skill as the Club 420 race begins.

The first leg is into the wind and the two man crews have to gauge the quickest way to the marker that indicates the downwind leg. Most of the boats head east toward Roanoke Island but about two dozen sail west. Someone in the spotter boat we’re in mentions that there’s a lot of thought that goes into deciding which leg to tackle first on the tack.

It’s difficult to tell if one strategy or another is better because suddenly the boats are almost on top of us, rounding the yellow race marker that indicates the downwind leg.

Spinnakers pop open—colorful balloon shaped sails that capture so much of the energy of the wind that the boats seem to leap forward with speed. The boats lean far, far into the wind, and the crews are perched on the far side of their boats, a counterbalance to the forces propelling them through the water.

Fitful winds on Thursday made for difficult sailing, but Friday conditions were just about ideal with afternoon winds between 10-12 mph with slightly higher gusts. As the winds picked up there was a little bit of chop in the water but the crews didn’t seem to have any problem with the water conditions at all and a number of races were run.

The competition ran Thursday through Sunday, with Peter Barron and Henry Burnes from Boston taking the first place trophy.

Sponsored by SailNC, the North American Club 420 championships were held this past week on the Outer Banks. A 21 and under competition, crews from all over the United States, Mexico and Canada competed for the top prize. The Club 420 refers to the length of the hull—4.2 meters, which a little under 14’.

SailNC is a recently formed Outer Banks nonprofit whose mission is: “The establishment of North Carolina’s coast and sounds as a sailing destination and hub, through the promotion and growth of all aspects of the sailing industry in North Carolina.”

The organization sponsored the North American Laser Class championships earlier this month and are sponsoring with Jon Britt of Nor’Banks Sailing the Weta Nationals September 23-27. The Weta is a lightweight trimaran designed and manufactured by Weta Marine.