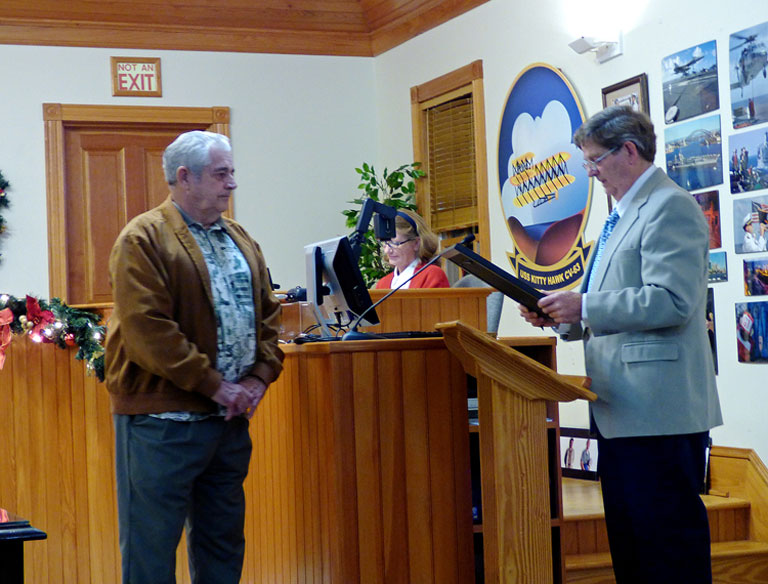 Mayor Cliff Perry stepped down last night after 26 years of service to the town of Kitty Hawk. In a ceremony citing his many accomplishments Chairman of the Dare County Board of Directors Warren Judge spoke and incoming mayor, Gary Perry, presented Cliff with an honorary gavel and a resolution of appreciation. Additionally, Perry received the Order of the Long Leaf Pine from Governor McCrory. The Order of the Long Leaf Pine is considered one of the most prestigious citizen awards of the state of North Carolina.

We ran this article in our Fall edition of the North Beach Sun and it seems like a good time to post the article now.

After 26 years of service—or 48 if we include his time served in the Coast Guard—Mayor Cliff Perry of Kitty Hawk will retire in December of this year.

Cliff is fairly modest, but as the tale of his life emerges, a man who has spent a lifetime in service to his nation, his birthplace and to others takes shape. 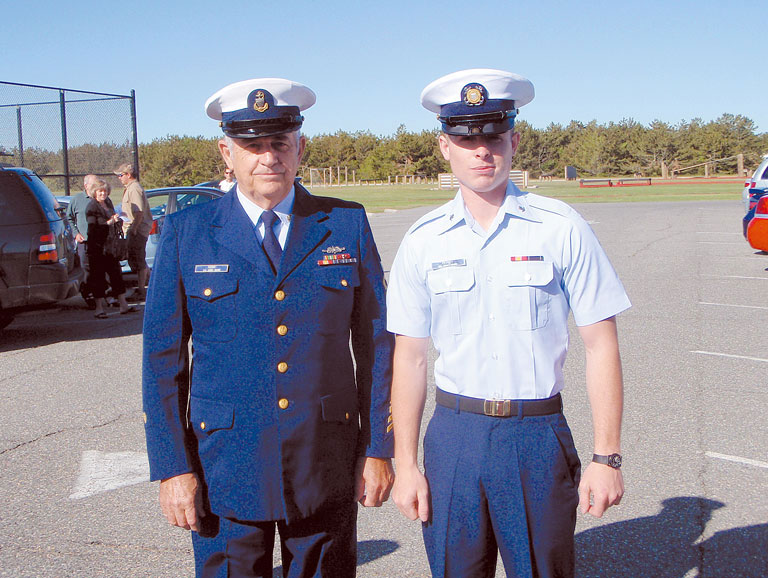 He spent 22 years in the Coast Guard, retiring as a Senior Chief (an E8 rating in today’s military) and came back to Kitty Hawk with a simple goal in mind. “I wanted to fish,” he says. “My daddy and granddaddy were fishermen, and when I came home, that’s all I wanted to do.”

It wasn’t, however, that simple

The kid who had joined the Coast Guard Reserve at age 17 was now a man with a family who had sailed the world. The list of ports Cliff had visited reads like a Frommer’s tour of the world. “I was in England, Portugal, Spain, Italy, the Canary Islands,” he says. “Oh, and Jamaica and Bermuda.”

Those ports don’t include the tour of duty in Alaska early in his career. It was a shock to a kid from Kitty Hawk who had never been farther than Norfolk, but he adjusted. “It’s really a community there,” he recalls.

He attended leadership school in Groton, Connecticut—which may be a part of how he has been so successful over the years. “It was a good school,” he says.

Nonetheless, when Cliff retired he had visions of keeping the family tradition of fishing alive and letting the rest of the world take care of itself.

Except the rest of the world, or at least the town of Kitty Hawk, came to his doorstep.

Four years later he attended his first town council meeting and saw that he was going to have to keep going back if he wanted to know what was happening. He got on the planning board and sat on the commission for two years before he realized he wanted to do more. “Rather than make recommendations, I wanted to make decisions.”

In 1987 he ran for town council and won. He has been on the Kitty Hawk Town Council ever since. “For 20 of that, I’ve been the mayor,” he remarks.

From the outset he understood there were principles that had to be part of any successful government. “Our council serves as the elected representatives of the voters of the town of Kitty Hawk,” he says. “We don’t have any favorites. My best friend and the guy who didn’t vote for me have to be treated the same.”

It has been a second career, a career almost spanning the history of Kitty Hawk as its own town. Although he does not discuss religion in public settings, Cliff is a deeply religious man and it is his belief that there was a clear path to the journey he has taken. “I feel as though God told me to get involved,” he says. “He is the one who gave me the wisdom to do what I have done.”