Children Playing at the Festival of Trees 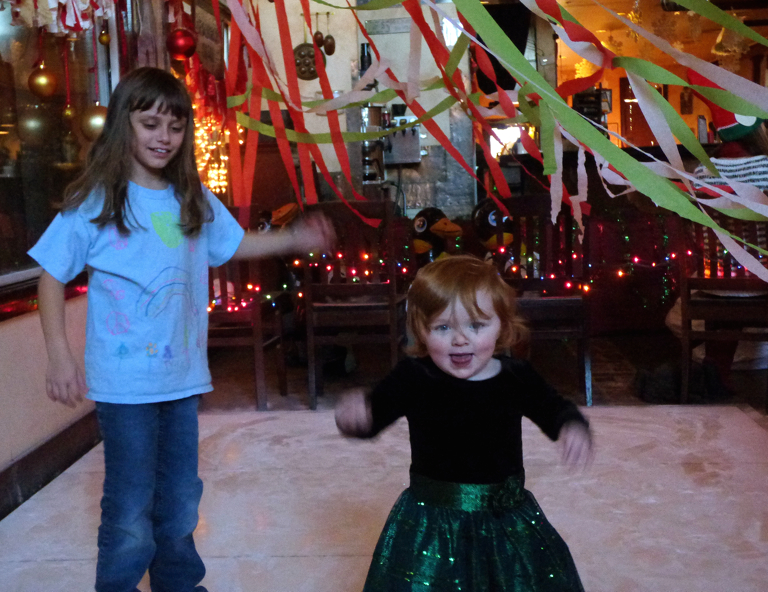 Sock skating at Santa and the Train.

She’s surveying the huge party tent holding the 26th Annual Festival of Trees, held this year at the Outer Banks Brewing Station. On the stage there’s a performance of worship music with a large band singing and playing guitars, drums, bass. At the base of the stage there are families gathered, fathers and mothers holding holing their children, dancing to the music or sometimes singing along.

Around the perimeter of the tent—and it is a very large tent, are the trees . . . that amazing gift from the community that has given hope to women and their children when violence destroys their home. 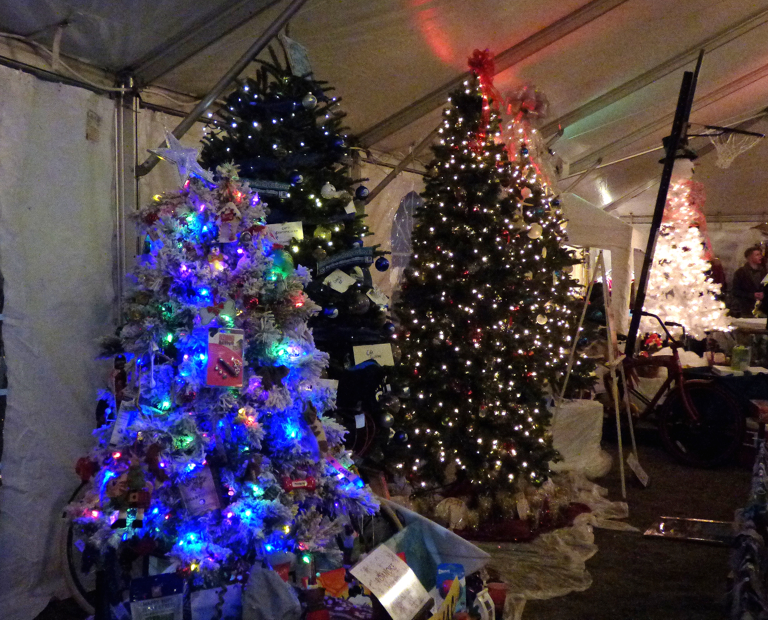 Seemed like there were more trees than ever at the Festival of Trees.

Festival of Trees is the major fundraiser for Outer Banks Hotline. It’s moved around a bit over the past few years, but for some reason it always seems most at home in the field behind the Brewing Station

It’s a little difficult to tell, but it seemed as though there were more trees this year than in past years, and the range of businesses participating is extraordinary. Real estate companies, retail stores, restaurants, there was even a pest control company with a tree. There is also a silent auction and chances to win big at a raffle.

There was one new element to the event this year; partnering with Outer Banks Children at Play, Thursday kicked off the Festival of the Tress with Santa and the Train..

“I think coming together was a better way to serve the community,” Carole Dawn Emerson, Executive Director of Children at Play says.

This is the 6th Annual Santa and the Train and the event has always been . . . well, fun.

There is, of course Santa. Beyond that, though, there are train rides—cars attached to a golf cart that takes tykes on a loop adventure in the Brewing Station back yard—crafts, and a personal favorite: the sock skating; funny, fun and it seems to remind everyone that the simplest things sometimes create the biggest smiles.

Perhaps most importantly, everything is donated. The Brewing Station donates the use of their dining floor; the sock skating rink was donated by Metro Rentals; the photographers for Santa worked at cost.

It’s an amazing three days, culminating with a gala catered affair for the Festival of Trees where the trees are auctioned off.

Beyond the fundraising though, as important as it is to keep Outer Banks Hotline and Children at Play funded as a part of the Outer Banks community, it is a wonderful example about what is best about the season—the community giving, the generosity of spirit and the laughter of children.