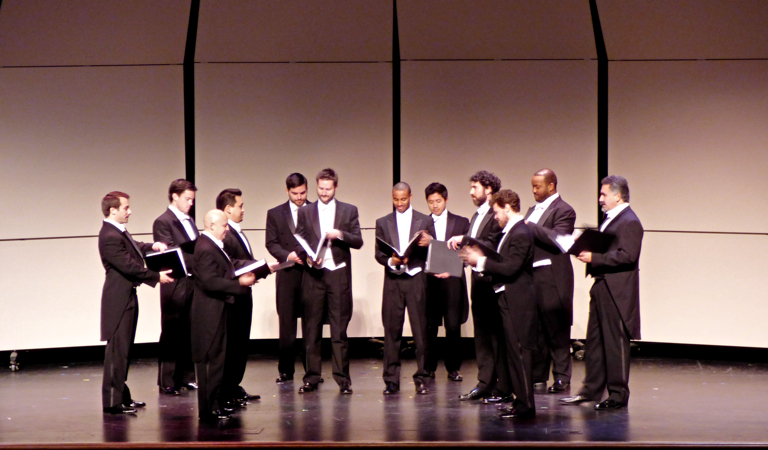 Chanticleer on stage at the First Flight High School auditorium.

Here’s a line a friend said that may be the perfect description of how good Chanticleer is. “I love the sound of my voice, and if I sounded that good, I would never stop talking.”

Playing before a full house at the First Flight High School Auditorium on Saturday night Chanticleer, redefined “World Music” and a cappella singing. Founded in 1978 in San Francisco with the express purpose of performing medieval chamber music in its original manner–which would be a male only choir–the group has expanded its repertoire into a dizzying array of modern music yet has remained true to its roots.

The first half of the program was based on the classic vocal music of the medieval and Renaissance periods, although they did stray into the 19th century with some selections from Mendelssohn

I have to admit that the music from this time period is not my favorite, yet the power, passion and virtuosity that Chanticleer brings to the stage is compelling . . . almost overwhelming.

It is rare for a man to be able to sing soprano, yet this is a full range choral group–12 voices from a resonant beautiful bass to a soaring awe-inspiring soprano. Almost as impressive, is their linguistic skills–by my count they performed songs in six different different languages, including English, of course. I don’t speak Russian, so I can’t be absolutely certain about their pronunciation, but from the seats, it sounded like their diction was excellent.

The second half of the performance featured more contemporary composition. Particularly impressive was the solo by bass/baritone Marques Ruff of Cole Porter’s So in Love. This was a great example of why Cole Porter is considered one of the finest composers of the 20th century. Sliding effortlessly from atonal and discordant sound to fully realized chords, it was jazz vocalization at its absolute best.

They also performed Peter Gabriel’s Washing of the Water–certainly different than the original, but wonderful to hear.

Chanticleer spent Friday afternoon working with the First Flight High School, Manteo and Cape Hatteras Secondary School choirs. Their insight, knowledge and ability to communicate was a lesson in the love of music. Equally as impressive was the repertoire of music they had in memory–there was not a song performed by the choirs that choral members did not know and know intimately.