Chain of Compassion-Opinion by Kip Tabb 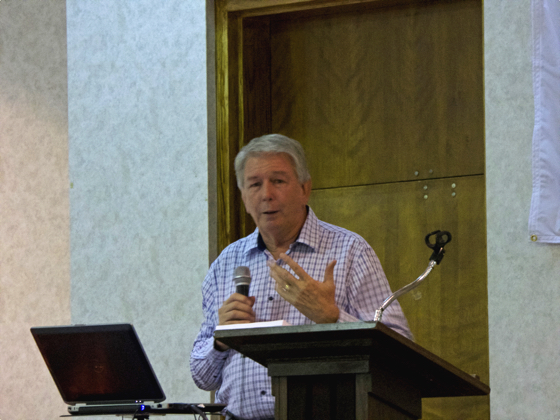 Darrell Scott speaking at ESCU about Rachel’s Challenge on Tuesday.

Like many Outer Banks residents I wear a number of hats. Most people know me, or at least know of me, because I’ve been covering Outer Banks news and events for almost 20 years. In addition to my professional life, I believe it is important to give back to this community, and I volunteer with a number of organizations.

One of the most rewarding volunteer experiences I have had has been with Children & Youth Partnership of Dare County, sitting on the Pass on the Positive Committee. This was the committee who brought Dr. Jeff Linkenbach to the Outer Banks in September to discuss positive community norms for the How Are the Children conference.

Feeling that there was additional work to do, the committee did not disband after the event, and there are a number of initiatives that will be introduced in the coming months. It was through C&YP that we learned that Trillium Health Services was bringing Darrell Scott, Founder of Rachel’s Challenge to Northeastern North Carolina and the committee felt it was important to attend. The first presentation in the series was held on the ECSU campus in Elizabeth City.

Rachel Scott was the first child killed when Eric Harris and Dylan Klebold rampaged through Columbine High School in April of 1999. Her father is Darrell Scott.

Rachel’s Challenge is based on journals and artwork her father discovered, but mostly on an essay she wrote about ethics, noting that “Compassion is the greatest form of love humans have to offer.”
She finished her essay noting that acts of kindness and compassion could, in fact, begin a chain reaction.

The presentation was compelling, powerful and emotionally wrenching—but if that was all there was to it, I would not be writing about it.

Rachel’s Challenge is about effecting change in schools—and the organization has been very effective in doing so.

Working with thousands of schools in the United States, Canada, Europe, Asia and Australia, Scott and his family have developed an extraordinarily powerful tool for changing how students—and teachers—think about behaviors toward others.

What I found particularly significant—and what I suspect is contributes greatly to its success—was the emphasis on a holistic approach. There are programs that focus on drug use, programs that take on the issue of suicide, or teen pregnancy.

What seems to set this program apart, though, is the emphasis on human interaction—basing the change that we hope to see on acts of compassion and kindness, and from that creating an environment in which kids feel more secure.

That is, of course, an oversimplification, but at the heart of what Scott discussed, was this: the simple concept of compassion as a form of love.

The program seems to stand out, however, in how completely it encompasses a concept of education that includes how we think about learning and teaching. Partnering with Dr. Robert Marzano, who has 40 years of real world and research experience looking at how schools educate kids and how kids learn, Rachel’s Challenge is going beyond the single concept of compassion as something to effect change. Rather by integrating the lessons of compassion and empathy into the education system, a healthier, more secure environment is created in which students have more opportunity to thrive.

Trillium Health Resources is underwriting the cost of Rachel’s Challenge in school systems. Dare County appears to be the outlier in the region, and at this point in time the only district not including the program in its plans.