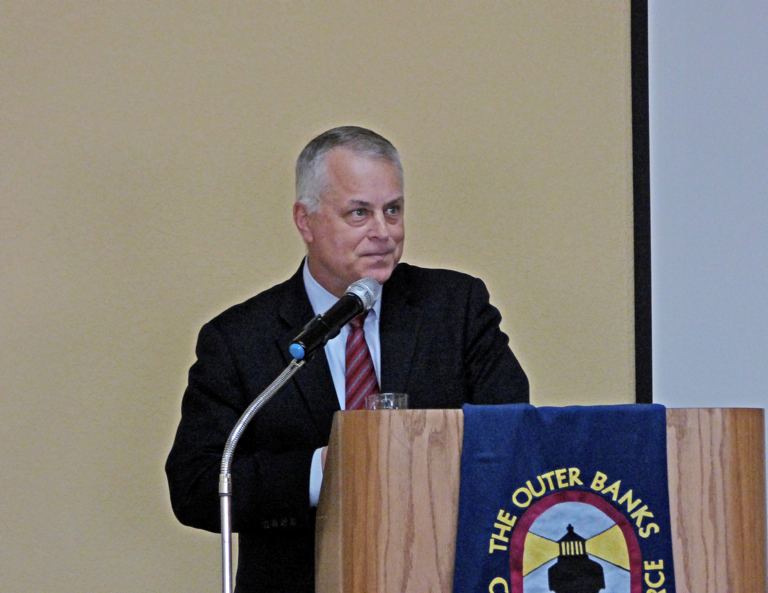 Dependent on bridges as the lifelines of the Outer Banks economy, the message North Carolina Secretary of Transportation Tony Tata brought to the Outer Banks Chamber of Commerce was one of hopeful caution at the organization’s annual Economic Forecast breakfast held at the Ramada Inn in Kill Devil Hills.

The outbound Wright Brothers Bridge will re-open on May 15 as originally scheduled, although there will be some additional work required that will have to be completed in the fall. The delay in completing the project is directly related to the uncharacteristically harsh winter.

On Hatteras Island, construction of the bridge over the New Inlet hotspot has begun. In the first phase of of the project, the contractor, Parsons Construction Group of Greenville, SC, will clear the brush from the west side of the road in preparation for laying a temporary detour when construction begins on the $79.6 million 21/2 mile bridge.

To date, there have been no court filings presented against the project. However the six month window for filing a case after the Record of Decision has been rendered is not until April.

There is May hearing scheduled for the Bonner Bridge federal appeal. Both the plaintiffs, the Southern Environmental Law Center, and NCDOT as the defendant filed for an expedited hearing.

If the appellate court rejects the SELC filing, construction on the replacement bridge could begin before the end of summer. The original decision by Federal District Judge Louise Flanagan upheld all the points the NCDOT presented.

There is additional cautionary good news as well for the local economy. Unemployment has dipped noticeably, with new home construction rebounding.

The opening presentation by Hutchins Canning and Company indicated continuing strength in the local economy service economy. Payroll and product costs have remained constant as a percentage of sales over the past five years and the region has seen modest growth in revenue.