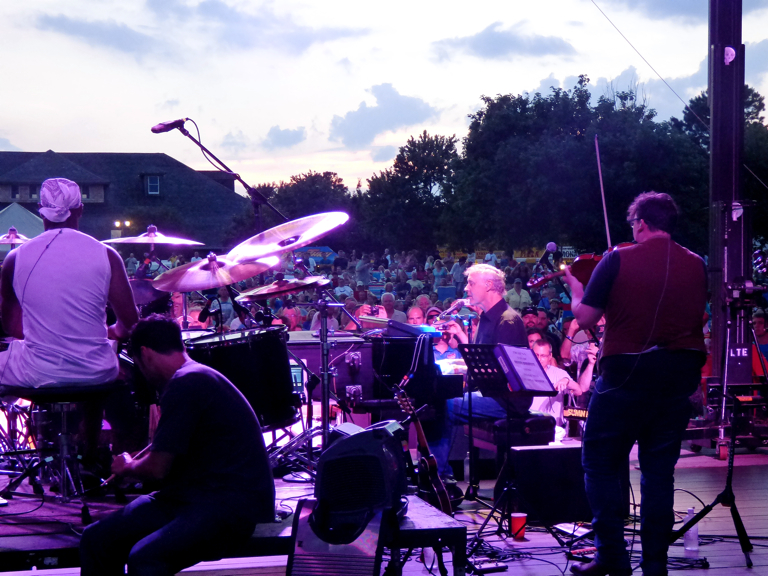 Bruce Hornsby and the Noisemakers came to the Outer Banks last night and they are everything as advertised and maybe a little bit more.

The first of the Brew Thru Summer Music Series, the band took the stage at Roanoke Island Festival Park, and it would be hard to imagine either a better setting or a more perfect evening for music. Playing against a backdrop of boats anchored in the sound to catch the concert and framed by the beauty of the Outer Banks, this was an outdoor concert the way they are meant to be.

The show kicked off with Chessboxer . . . just a fiddle and banjo or sometimes a guitar and mandolin . . . and they were amazing. As in A-MAZING! Which is certainly not a way a reviewer typically writes about music but the range of compositions they played, the way they played the music and the skill they exhibited was, well, amazing.

The duo consists of Ross Holmes or mandolin and fiddle and Matt Menefee on banjo and guitar. Holmes also plays the same instruments in the Noisemakers.

There aren’t very many musicians that can effortlessly move among bluegrass, Celtic and Scottish folk, jazz and then end the concert with a piece by Claude DeBussy, the classical French composer of the late 19th and early 20th centuries.  But they did and a couple of quick interview of the concertgoers showed absolute agreement that they were astonishing.

The Pat McGee Band followed, and with the really tight, full sound they have, they were the perfect group to lead into Hornsby.

Along with some great guitar work from McGee, the performance seemed ideal for an outdoor event that was geared to the whole family. There were a number of songs the band performed that were written about McGee’s daughters and his experiences with them.

Then, as the sun was setting, Bruce Honsby and the Noisemakers took the stage.

There are some performers who, when they take the stage, there can be no doubt that they are the headliner, and that is certainly true with Hornsby.

There is a command of how the music is going to be performed, how the band—and especially Hornsby—is going to interact with the audience and a level of musicianship that leaves no doubt that this is the reason people paid their money to come to the show.

Hornsby likes the crowd on its feet and at the stage and with a few hundred concertgoers right at the edge of the stage, he got what he likes. From the first notes it was clear this would be a special evening. 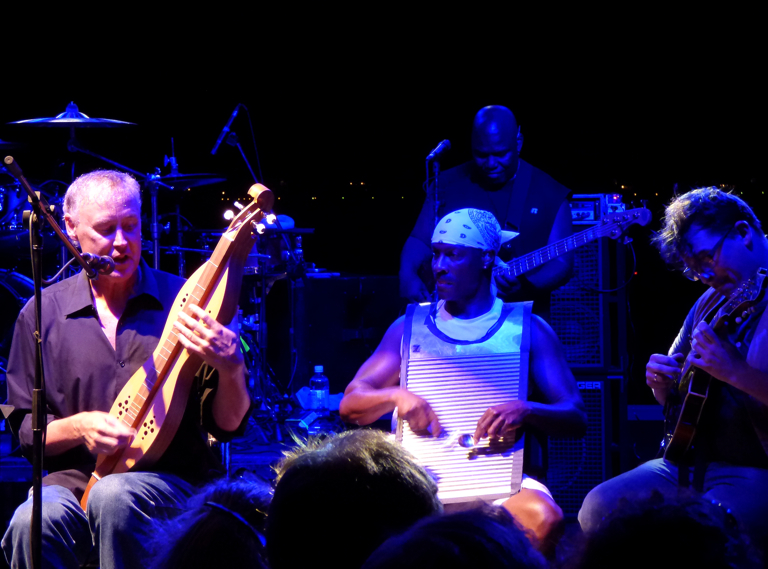 Their sound is almost a blending of classical music with the full range of what the pop music sound can be. They played, of course, “Mandolin Rain” and with Holmes on mandolin, the song took on a haunting, beautiful sound.

But Hornsby is a performer who has stayed at the top searching for new musical ways to express himself. He is constantly pushing the envelope, seeing what else he can do with his unique sound, and at the concert last night he brought out his dulcimer.

A three stringed instrument, the dulcimer is a part of traditional bluegrass music and as he got ready to sing, he mentioned to the audience, “These are new songs.” Since he put a couple of pieces of paper with some notes on it on the music stand, it seems a safe assumption they were very new pieces of music.

The sound focused on what would be considered a classic bluegrass trio—Hornsby on dobro, Holmes on mandolin and fiddle and drummer Sonny Emory on washboard, played with spoons. The rest of the band backed them up, and the sound seemed perfect for an early summer evening.

Next up for the Summer Concert Series: Live on July 10 followed by the Gin Blossoms on July 17.