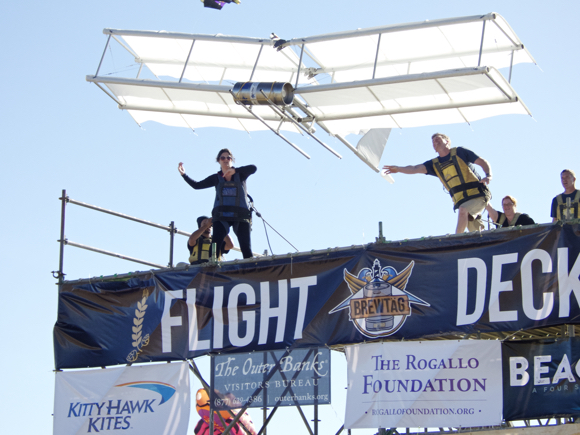 Outer Banks Visitors Bureau launching their Wright Flyer. The glider seemed to be in flight longer than any other, although it did not qualify by distance. Standing on the edge to the left is Allison Wyant. Pushing the tail is Aaron Tuell, Amy Wood to his right and Bruce Weaver of Kitty Hawk Kites.

BrewTag—a festival of flight, beer or just a good time on a beautiful day? A difficult question to answer because it was all of the above.

Posing the ageless question, if mankind can fly why can’t beer, John Harris and the crew at Kitty Hawk Kites proved the theory that flight for inanimate objects may be possible but the science has a long way to go. 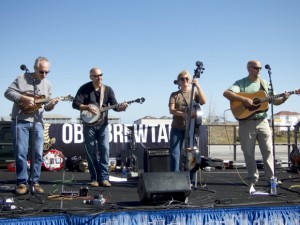 Postponed from its original October 3 date because of the weather, Saturday proved to be a spectacular autumn day on the Outer Banks. Held at the Nags Head Event Site, the music was great with the Jug Tucker Band playing up to competition time and Soul House Revival playing after the attempts at flight.

BrewTag seems to be a first of its kind event, at least in the United States. According to President John Harris of Kitty Hawk Kites, he was hoping to have an competition similar to the Red Bull Flutag events in which a human being takes flight.

The town of Nags Head expressed concerns about human flight, but a conversation with Eric Reece of the Outer Banks Brewing Station led to the concept of beer in flight . . . well, an empty mini-keg of beer strapped to the flying machine—or more properly, glider.

Saturday was a fantastic day to introduce the world to the concept of flying kegs. 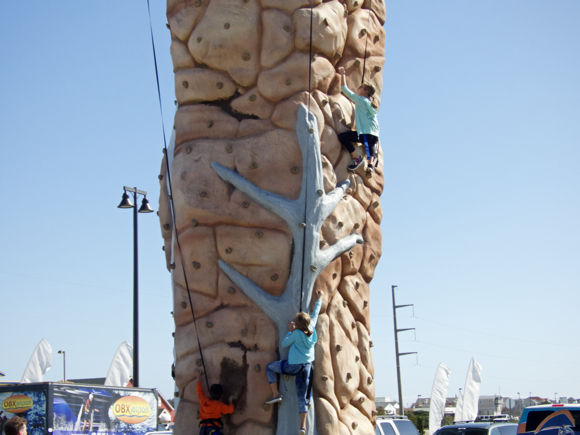 The event, sponsored by Kitty Hawk Kites and the Outer Banks Visitors Bureau was very kid friendly with the KHK Kidzone on hand, a climbing wall and they even brought Stanley the Shark from Kitty Hawk Water Sports.

The highlight of the day, of course, was the “Kegs Will Fly” competition—although that description should be taken advisedly. With a 15mph ENE breeze and launching from a 20’ tower, whether all of the aircraft flew is somewhat subject to interpretation. 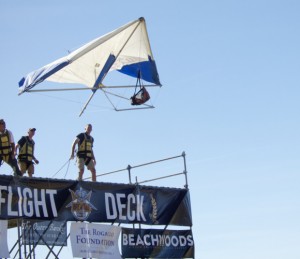 First flight of the day. The KHK team briefly led with a distance of 20′.

Scientifically what happened was as soon as they were launched, the thrust of the wind created so much lift in the wings that the aircraft went immediately into a stall. Observationally, almost everything crashed immediately.

The longest flight of the day was from Loonies on Tap at 20’9”—setting a new world record for BrewTag along the way. That distance just nosed out the KHK team who came in second with a flight of 20’.

Even though not everything flew quite as well as hoped, it was a great time and all for a good cause. Proceeds from the event will go to the Rogallo Foundation. 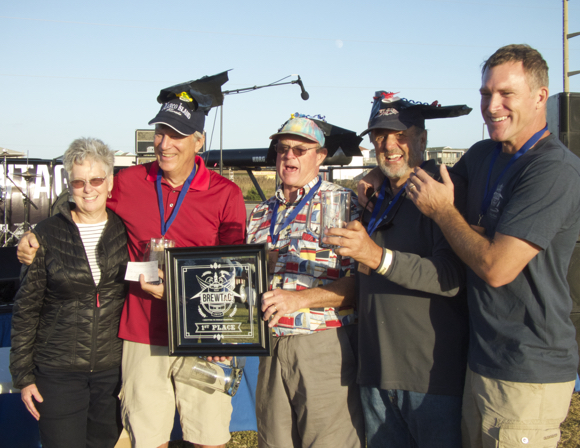 Francis Rogallo, a NASA flight engineer, invented the Rogallo Wing working at home with his wife, Gertrude. A flexible wing, the Rogallo Wing is the basis for hang gliders, paragliders, and modern parachutes.

The mission of the Rogallo Foundation according to its website is to: “honor the Rogallo’s; preserve their priceless records, artifacts, and research; interpret their incredible story; and protect this legacy of free flight for millions of people in all the Nations of the world.”

The list of sponsors for the event is way too long to include, although we will mention the North Beach Sun is one of them.

This was advertised as the first Annual BrewTag; hopefully it will be an annual happening. It was a great time, a lot of fun and we’ll look forward to next year.