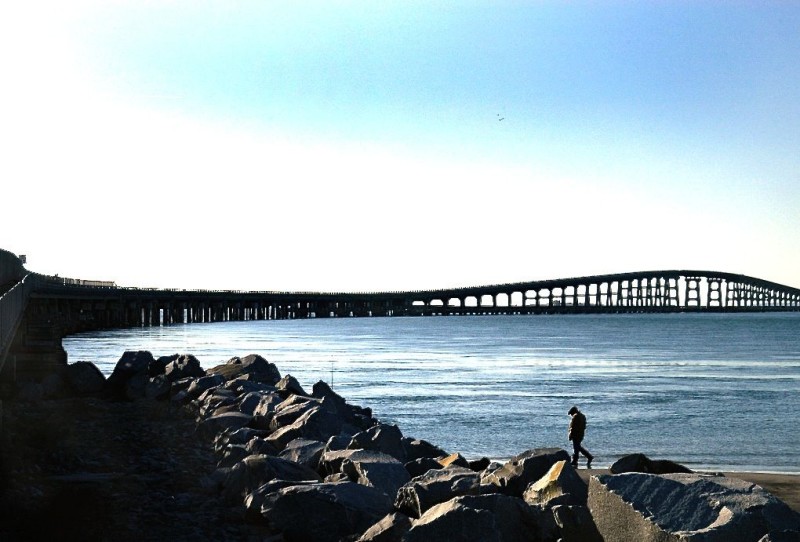 Traffic will be halted on both sides of the Herbert C. Bonner Bridge over the Oregon Inlet at 9 a.m. Monday, March 10, for approximately 30 minutes while the NCDPT’s Location and Surveys Unit performs a routine mobile scan of the bridge.

In 2012, NCDOT installed scanning technology to allow it to closely monitor any movement of the bridge. A series of points are marked along 150 of the bridge’s 200 spans. Each point is surveyed before the start of hurricane season and after each storm to see if it has moved. This scan will be the first of several scheduled scans done throughout the year, as well as after any severe storms that may hit the area.

Signs will be erected on both sides of the bridge to alert drivers. Concrete barriers interfere with the scan, so NCDOT maintenance trucks will be parked at both ends of the bridge to block traffic. Good sunlight and minimum shadows are needed for the scan to be done properly. It is necessary to stop traffic to eliminate shadows from other vehicles during the scan. If it is cloudy or the weather is not favorable, the scan may be rescheduled.

Emergency Repairs Complete – Additional Work Underway  Crews last month completed an emergency repair project at Bent 166 of the Bonner Bridge where critical levels of scour, or sand erosion, around the piles of the support structure required NCDOT to close the bridge on Dec. 3, 2013. The bridge reopened to traffic on Dec. 15, 2013, following an aggressive dredging effort that placed approximately 30,000 cubic yards of sand around the piles.

Following the reopening of the bridge, NCDOT began work with Carolina Bridge Company Inc. of Orangeburg, S.C. on an emergency repair project at Bent 166 to provide long-term stabilization to the support structure. The project included placing 78 three-foot by three-foot sandbags, 158 four-foot by four-foot sandbags and 980 individual A-Jacks bundled together into multiple logs around Bent 166.

Now that the emergency repair work is done, the department has begun a similar project with Carolina Bridge Company Inc. from Bent 162 to Bent 165 of the bridge. NCDOT has monitored scour in this area since December. While the scour at this location is in no way as critical as it was at Bent 166, the department decided to be proactive and move forward with similar work out of an abundance of caution while crews were still mobilized at the bridge.

The project includes placing three-foot square by three-foot tall sandbags around the pilings of each bent in this area and five-foot-square by two-foot-tall sandbags between each bent. The estimated $1.8 million project is expected to take approximately three months to complete, weather permitting.

Permanent Replacement  These repairs are not considered a permanent fix for the aging Bonner Bridge. After 50 years of weathering many storms, the bridge needs to be replaced. In July 2011, NCDOT awarded a $215.8 million contract for the design and construction of a new bridge. Design work began immediately and construction of the new bridge was set to begin in early 2013; however, lawsuits have put the project on hold.