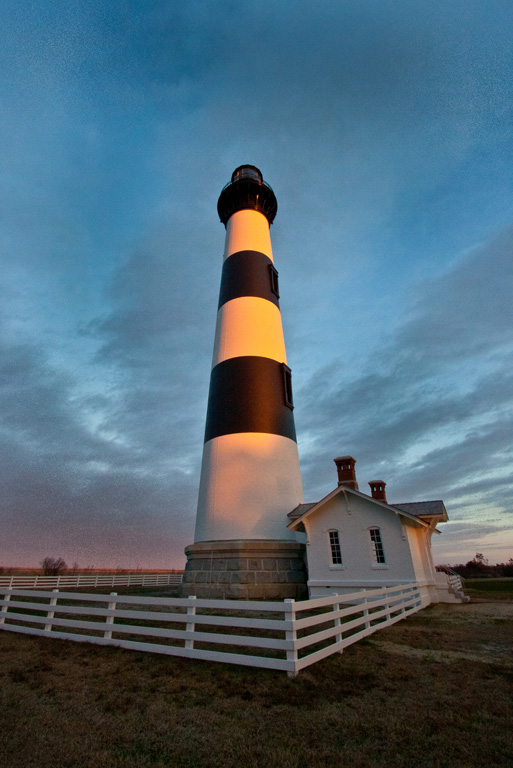 The Bodie Island Lighthouse is finally open to the public. Four years after restoration work began and $5,000,000 later, for the first time in the history of the lighthouse, the public will be able to climb to the top.

And what a climb and what a view it is. Very rarely does the finished product even meet expectations, let alone exceed them, but by any standards what the National Park Service (NPS) has done with Bodie Island Light is spectacular.

Completed in 1872, the Coast Guard transferred the building and grounds to NPS in 2001.

In 2009 NPS received funds to begin the restoration process, but according to Doug Stover, Cultural Resource Program Manager for Cape Hatteras, when workers began peeling off the paint unanticipated damage to the structure was found. “We didn’t know how much damage there was until we started to peel the paint off the brick.”

The damage was so extensive that work was halted until a new assessment and new funds could be found.

With a better understanding of the work that had to be done and an infusion of funds, workers swarmed over the lighthouse, completing renovations in late March.

The restoration work was innovative and remarkable. As an example, 20 of the metal steps of the spiral stairwell had to be replaced. The damaged stairs were removed, sent to a foundry, melted down and recast—although zinc and other materials were added to slow down the corrosive effects of the Outer Banks environment.

Entering the lighthouse, it is apparent how massive the structure is. Built using a construction method called stacking, the tower stands on a massive base of timbers and rock. The base walls are massively thick and then taper toward the top.

The view from the walkway is awe inspiring. Soaring 156’ above the land below, objects up to 15 miles away can be clearly seen. The marsh and impoundment ponds at the base of the lighthouse spread out toward the sounds like a like a gigantic three dimensional map. Each wave of the Atlantic Ocean to the east is a distinct white line rolling to the beach. To the north, the towns of the Outer Banks are a clear series of skylines and immediately west the port of Wanchese stands out in stark relief.

One of the most remarkable features of the lighthouse is the first order Fresnel Lens. First developed in the early 19th century by French physicist and engineer Augustin-Jean Fresnel, the lens were able to magnify light to a remarkable degree. A first order lens was the largest and most complex made.

The Bodie Island Lighthouse lens is the only fully intact first order lens still housed in a NPS lighthouse. Twelve feet high with an interior diameter of a little over 6’ it is massive . . . and beautiful.

Unlike Cape Hatteras Lighthouse, access to the lighthouse will be through guided tours only. The fee will be $8.00 and $4.00 for senior citizens and children. Tours will be 45 minutes and are limited to 22 participants.

For more information go to www.nps.gov/caha.