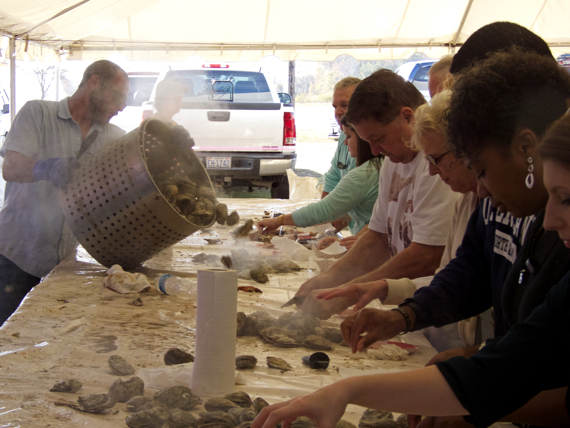 Steamed oysters by the bucket full, courtesy of I Got Your Crabs. Photo, Kip Tabb

It would be difficult to find a better way to spend the Saturday after Thanksgiving than shucking oysters, sipping wine and beer and enjoying a spectacular day with friends at Sanctuary Vineyards’ annual Big Curri-Shuck.

Evidently there are a lot of people who agree with that. Held at Sanctuary Vineyards, next door to the Cotton Gin in Jarvisburg, the event has been steadily growing in popularity. Sanctuary Vineyards Manager John Wright estimates there were “about 1000 people. We had to move the event outside a few years ago to keep up with the demand for tickets,” he adds.

The concept is simple; good fresh food, beer, wine and something for the kids to do—there were hayrides all day . . . throw in some great music from the Cody Austin Band, and everyone is guaranteed a great time.

Yet if concept is simple, the purpose behind what Sanctuary Vineyards and I Got Your Crabs, who steamed all that oyster (and crab) hoped to do is more profound. 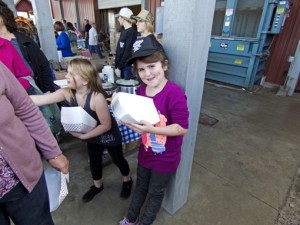 Handing out trays for carrying oysters to the picnic tables. Professional and pleasant!

“Hunter and Olivia Stuart (I Got Your Crabs) and I wanted to combine oysters, crabs and other local seafood with wine, particularly in an event that offered all you can eat portions . . . “ John said. “Big Curri-Shuck reflects the local character of seafood and wine raised in nearby waters and farms by people who care about what they do and who they’re serving.”

Since we’re talking about food and drink, here’s the snapshot food review. The oysters were wonderful—plump, juicy, slightly salty examples that truly reflected “the local character of seafood.”

The barbecue was good, worth going back for seconds, but after two dozen oysters or so, there’s not much room left. The wines were very nice—I thought the Albarino—a dry Spanish white—went particularly well with the oysters. Sorry, I didn’t get to the beer from local vendors.

The event has grown in popularity since it first became part of Outer Banks Thanksgiving tradition. According to John, that popularity is the result of a lot of community support.

“The Currituck Department of Tourism has done a good job of supporting local businesses and efforts to bring tourism to Currituck,” he said. “And all the employees here at Sanctuary Vineyards and Cotton Gin. It’s cliched but without farmers there’s no food or wine ,” he went on to say. “and without support for the local commercial fishermen . . . there won’t be seafood either. “