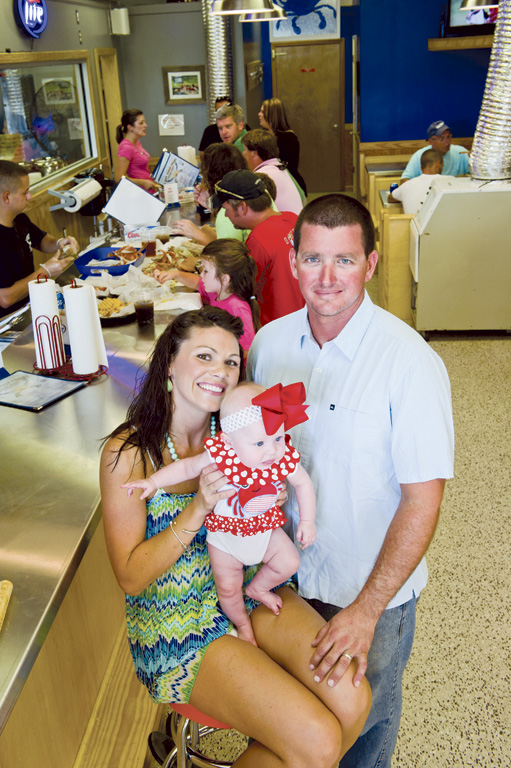 Hunter Stuart, his wife, Olivia, and daughter, Sifer at I Got Your Crabs.

At the ripe old age of 32, Hunter Stuart’s been crabbing for close to three decades. Every morning when crabs are in season, Hunter starts off the day at first light on Bell’s Island. “I walk across the road and load about a thousand pounds of crab bait—menhaden. I fish between 400-450 crab pots for seven or eight hours.”

Hunter started in the family tradition of crabbing young, as a preschooler in fact. At five years of age, before most kids learn how to read or write, Hunter was given a 16-foot River Ox boat with a 2-horsepower Johnson motor.

“I would get on it by myself right in front of the house,” Hunter recalls. “I actually had about 15 crab pots then.” He’d put the crabs he had caught into his wagon and sell them door-to-door to his neighbors.

“I was fishing with a net reel boat when I was 11 or 12, catching flounder before school,” says Hunter. “I started getting pretty serious [about crabbing] when I was about13. I had about a thousand crab pots then.”

Hunter’s story might have ended there with him spending his days as a commercial fisherman selling to distant crab houses, just like his father and his father’s father had done before him. But he saw a chance to keep at least some of his fresh catch local.

“There were always a dozen different trucks or buyers going to Maryland with the crabs,” he says. “What’s the need in trucking it four hours when people want it here?”

Hunter started selling bushels of live crabs out of a trailer at the Border Station in Moyock. Within a few years his business, I Got Your Crabs, had grown to two trailers and a converted ambulance. Looking for more ways to sell his fresh catch, Hunter opened a seafood restaurant also named I Got Your Crabs at Milepost 4 in the Sea Dunes Shoppes.

“It [the restaurant] is another way to move the product,” says Hunter. “I send what I need to the restaurant and then everything else goes to Maryland, D.C., Northern Virginia or Delaware. The trucks come right to my house to load it up.”

At the restaurant, says Hunter, “We’re producing everything ourselves. It comes directly off the boat that day or the day before. It’s the freshest you’re gonna get on the regular.”

Because he’s actually the one on the water every day, Hunter knows what grades the crabs are. “We physically look at every crab we’re selling, and they’re graded right there on the boat.” Hunter says his goal is to sell the biggest crabs at the best price. 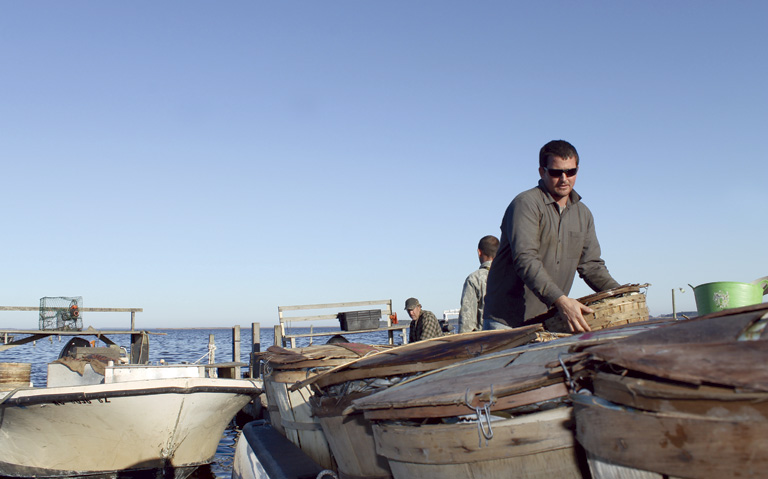 When crabbing season comes to a close in the colder months, Hunter guides hunting tours out of his family’s lodge, Stuart’s Hunting Lodge, in Currituck.

“I’ve never worked for anyone else, except my father,” says Hunter. “I’ve just always been into doing it myself. I don’t want to depend on others. I don’t invest in the stock market; I invest in myself.”

Spending so much time on the water and crafting his businesses, Hunter still has found time for a personal life. He and his wife of a year and a half, Olivia, have an eight-month-old baby girl named Sifer. She’s a blue-eyed beauty, and adorable pictures of her in crab pots and a knitted crab outfit decorate the walls of his seafood restaurant.

Hunter’s life as a commercial fisherman has already been a successful one, and he foresees no signs of the local crabbing industry slowing down. “There’s just an endless supply of crabs,” he says. “There’s no catching all of them. I think of it as raising crabs. We feed them and feed them in the crab pots, and then one day they’re too fat to walk out.”