As Arthur Approaches the Outer Banks 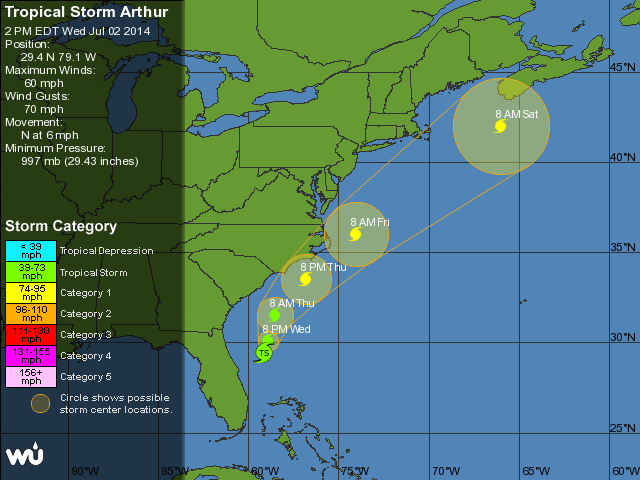 Having a hurricane approaching the Outer Banks this early in the season is somewhat unprecedented, but unprecedented or not, Tropical Storm Arthur (soon to be Hurricane) is off the coast of Florida and moving this way.

If there is good news in all of this, storm tracks have been consistently moving to the east—out to sea—and if the latest National Hurricane Center track holds true, the Outer Banks will miss the brunt of the storm’s power.

So far, here at the North Beach Sun, we have seen nothing that indicates a mandatory evacuation is at hand. The last update we got from Dare County Emergency Management this morning put off any decision on evacuations until this evening.

It appears as though our Outer Banks visitors are taking all of this is stride. Doug Brindly, owner of Brindley Beach Vacations said his team has not been fielding questions from guests about the storm. “We haven’t heard anything from them so far,” he said. “I’m sure they’re aware of it, but I don’t see them changing they’re plans.”

If Arthur holds to its predicted speed and course, most of the storm will pass the Outer Banks late Thursday evening and into Friday and should be gone by early Friday afternoon.

There are, of course, some scheduling changes that are occurring because of the storm. Fourth of July celebrations in particular will be affected.

Manteo will hold its U.S. Birthday bash on Sunday.

No word yet from the Whalehead Club about rescheduling, but if the predicted path of Arthur holds, there may be no reason to reschedule the Corolla fireworks.

Duck is holding off making a decision on their Independence Day Parade until tomorrow.

A point of clarification for our visitors. Although we mentioned if the current track holds, we’ll miss the brunt of the Arthur’s power, that doesn’t mean we won’t feel the effects. Thursday evening into Friday morning would be a good time to rent a movie, fix the family a nice dinner and plan on not going out.