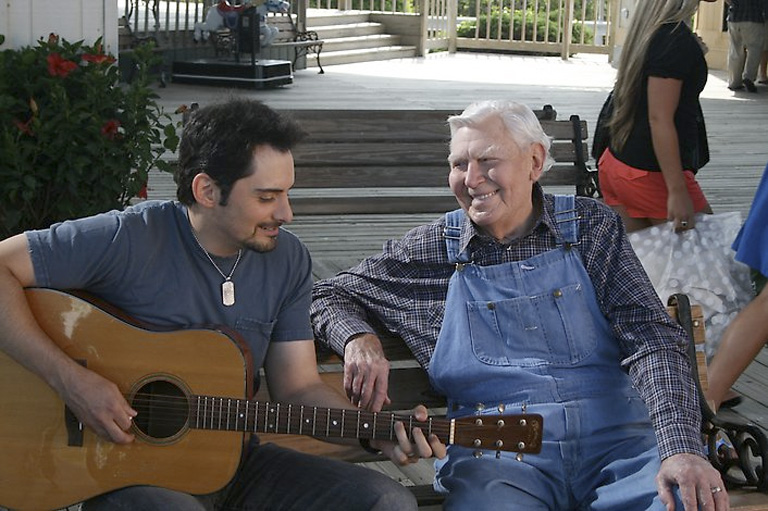 Brad Paisley and Andy Griffith in Waiting for a Woman (2008).

There was always a certain amount of pride in knowing that Andy Griffith made the Outer Banks his home. It was pride that was never publicly acknowledged since everyone who lived here studiously ignored him in public—an act that granted him the anonymity and normal life that he so clearly craved.

Years ago, I worked in the seafood department at Seamark Foods and Andy Griffith was one of our regular customers. Everybody who worked there knew who he was and treated him just like every other customer—hopefully with a certain amount of deference and courtesy, although I can’t speak for others

I have to say, that Andy Griffith in person did not look all that much like Andy Griffith on TV. He was a little heavier, a little bit shorter and he didn’t wear makeup. Nonetheless, there was a resemblance and folks from out of town would approach him, breathless and excited, and he would, as far as I could tell, let them know firmly that he was not interested in being the object of anyone’s hero worship.

Griffith first came to the Outer Banks in 1947, performing in the Lost Colony. He kept coming back for the next six years until a growing TV and stage career kept him away.

The range of personalities he portrayed was extraordinary and lost sometimes in a perspective of his work is what a gifted actor he was.

He broke into film in A Face in the Crowd playing “Lonesome” Rhodes, a darkly sinister and cynical character hiding behind the mask of an “aw shucks” country western singer. He reprised his Broadway role in Not Time for Sergeants on the big screen—his Will Stockdale a lot closer to Goober Pyle with his wide-eyed innocence and wondrous view of the world. 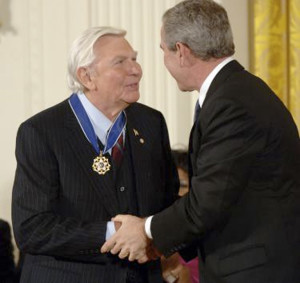 His fame, of course, came from two roles—Sheriff Andy Taylor in the Andy Griffith Show and the detective, Ben Matlock, in Matlock. Different characters, although cut from the same cloth—these were confident, aware “country” figures without the “aw shucks.”

What is probably most remarkable is that he occupied the roles he played so well, that it never seemed like acting—which may have been the reason he never won awards for any of his body of work.

He did win a Grammy for his gospel singing and the Presidential Medal of Freedom, but the awards for his acting never seemed to materialize. That is, perhaps, consistent with role he played in life as well—what he did, he did so well that it just seemed to be the way it was supposed to be—an exceptional man leading an unexceptional life.

One of the last performances he gave (it may have been his last) was Griffith’s 2008 performance with Brad Paisley in Paisley’s video of Waiting on a Woman filmed at the Tanger Outlet Mall in Nags Head. We’ve included a YouTube link. The performance is quintessential Andy Griffth; effortless, touching and perfect for the role. http://www.youtube.com/watch?v=M-C-IbkuNWs&feature=player_detailpage.