An Idea Looking for a Home 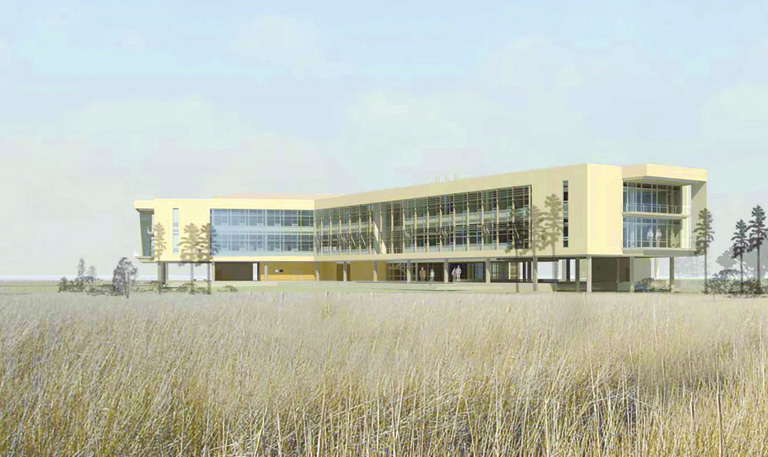 Having a presence on the Outer Banks home since 2003 the Coastal Studies Institute has been an idea looking for a home. Part of the North Carolina university system, the institute has a mandate to “ . . . offer educational opportunities, provide community outreach programs, and enhance communication among those concerned with the unique history, culture and environment of the maritime counties of North Carolina.” Which they have done, and done extraordinarily well.

Part of the Community

Operating from a main office in downtown Manteo and a laboratory in Nags Head, what the institute has accomplished without a central campus or facility has been remarkable. CSI staff has worked with almost every middle school and high school from Elizabeth City to Hatteras designing projects highlighting ways that local environmental issues can be addressed with minimal impact.

The staff has cooperated with local governments, helping them to craft zoning requirements consistent with environmental concerns. The institute is involved in some truly cutting edge research on wave action as an energy source, and they have partnered with government and North Carolina colleges to map shipwrecks in the graveyard of the Atlantic.

There are, however, very real limits on what can be accomplished without a campus to call home, or facilities to study in detail the information discovered in Outer Banks sounds or the ocean.

That limitation has changed and changed in a spectacular fashion.

Rising from a marsh between Manteo and Wanchese that has been filled with dredge spoils, the new CSI campus offers an extraordinary state-of-the-art facility to fulfill and grow the institute’s mission.

The main building, a three-story combined classroom, lab and meeting space, will give instructors and staff the opportunity to interact in a professionally designed setting with the public and students. “One of our missions is to build advocacy,” Robert McClendon, Sustainable Design Specialist for CSI and onsite project manager, says. “We want to build relationships with elected officials and business leaders in the community.”

The first floor of the main building will hold the meeting spaces. The second and third floors house classrooms, labs and research facilities.

In addition to the main building, there is also a marine services building that looks almost like a hugely oversized garage. Connecting with the sound through canals and a dock, the building contains a repair facility, dive shop and fabrication center so research tools can be built on site.

Combining classroom, lab and field work together is part of a philosophy of education that creates an environment that includes all the areas of coastal processes. “It’s an immersive type of experience,” McClendon says. “It’s so much favored over a landlocked classroom where everybody studies their own area. Our program allows a biologist to work with an engineer and work with an architect, and work with people who study the whole coastal process.”

Although a part of the University of North Carolina system, without a campus or dedicated classroom it has been difficult for the Roanoke Island facility to offer the type of instruction similar sites have been able to offer students. Associated with UNC Chapel Hill, ECU, UNC, NC State and Elizabeth City State, the new building will enable expanded classroom instruction and field work.

Original plans called for onsite cottage-like dorms, but construction of the CSI building and marine services building used up the funds earmarked for the project. “Moving to this site ate up a lot of our budget,” McClendon says. “Hopefully we’ll find a way to fund the dorms later.”

Innovation in Design and Construction

Although the interior of the classrooms are spectacular, some of the most innovative uses of applied science have been in the construction of the facility. The building is being constructed using LEED certified building techniques, and although the main structure is 90,000 square feet, a number of steps have been taken to minimize the impact of the structure on the environment.

Storm water collection ponds will filter the water before it reenters the soil and wastewater will be treated and reused to flush toilets in the marine services building and dorms (when completed). Although rainwater has been collected in cisterns for years to be used as drinking water, it is not considered safe by modern standards. One of the ongoing research studies at the CSI is how to convert rainwater captured in cisterns into potable water.

That type of thinking seems to be at the heart of philosophy of the CSI—practical, hands on application of the science of living along the coast. Plans have been on the books to find a way to allow the institute to realize its potential since 2003, and those plans may now be coming to fruition.

“I’ve been working on this project for nine years,” Nancy White, Director of the CSI, says. With its expanded programs and new meeting and classroom space, the new campus will allow the institute to grow to its potential. “You have to have the facilities to support the mission,” White observes. “This facility will do that.”

The new classroom building will be officially opened in November of this year. Classroom instruction will begin in 2013.