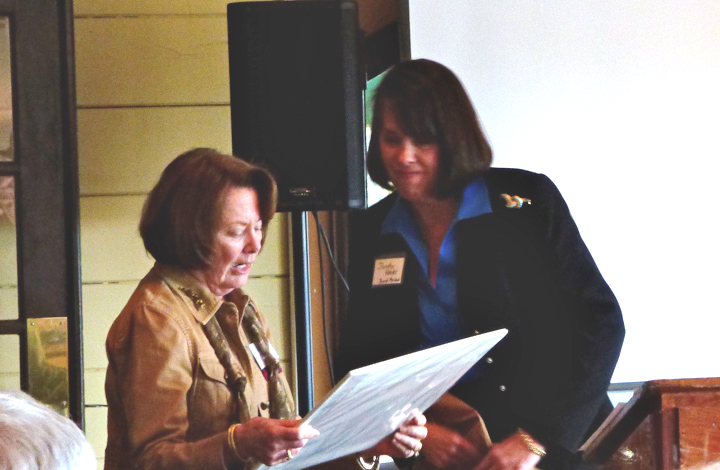 The emotional climax to the annual Outer Banks Community Foundation luncheon was the presentation of a Champion Award to Sterling Webster. Sterling passed away last June, but his wife Jane came forward to accept the award.

Dorothy Hester, Vice President Elect of the OBCF, described a man dedicated to the welfare of the Outer Banks and the well-being of his employees. “I worked for Sterling for ten years, and he used to tell people he raised me,” she began.

Now the Public Information Officer for Dare County, in her remarks, Hester described a man who gave generously in both time and money to the place he loved, concluding with this description of him. “He was an incredible man with an incredible smile.”

Another Champion Award was also given to Patrick Herman, tax attorney for Pat Herman, senior tax attorney at Vandeventer Black for years of advice and direction to the OBCF.

Held at Pamlico Jack’s in Nags Head, the 2015 luncheon was the best attended the organization has ever had. The attendance may have been a result of the postponement from the original February date because of snow, but the contributions the OBCF makes to Outer Banks life is becoming more apparent to residents.

Executive Director Lorelei Costa provided the opening remarks, using a metaphor to describe how the endowment funds of the OBCF benefits the community. “A community foundation is like a community garden,” she said.

She explained that the endowment funds are the seeds that allow the harvest of the programs and grants that have benefited the local community, and the harvest for the Outer Banks has been tremendous.

At the beginning of the year the OBCF had over $13 million in assets, and from those funds, over $140 thousand in scholarships were awarded and over $500 thousand in grants.

“I promise you,” Costa went on to say. “We’ll give back each year . . . we’ll stick to it. That is not the Community Foundation’s money. That is the Outer Bank’s endowment.”