All Hail the Idiots! 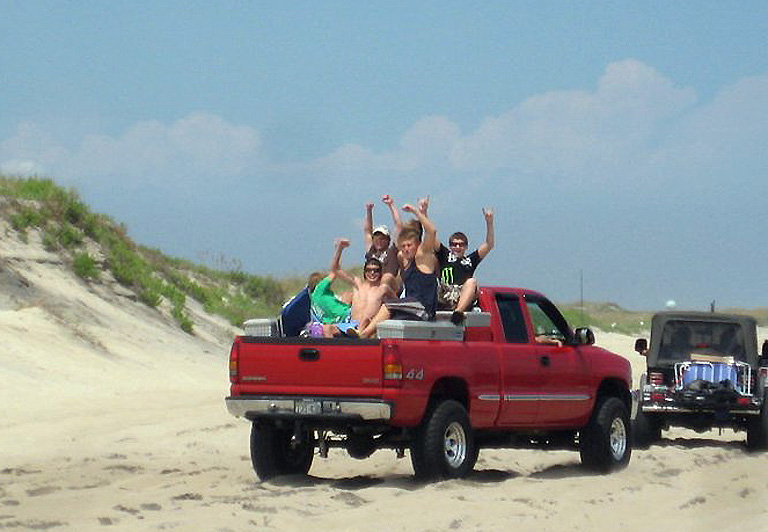 Comment from Oregon Inlet Idiots: “Is this a Clown Car or what? One rut, one bounce…..can you say face plant or worse. Just sayin!”

With the intent to educate people and show them what not to do while driving on the Outer Banks beach, while poking a bit of fun, Facebook’s Oregon Inlet Idiots encouraged others to share their pictures.

The beach was BAD in the Spring of 2011. A rash of winter storms coupled with a record setting drought created deep, powdery sand that challenged the most seasoned 4WD owners around Oregon Inlet.

When Memorial Weekend rolled around some long time residents began taking pictures of the calamity. Visitors to the Inlet for more than 25 years, they were frustrated and amused at the ignorance about beach driving. When they retuned to their north beach home, they posted the pictures on Facebook on a page they created called “Oregon Inlet Idiots”. Little did they know that they had given birth to a social phenomenon that would become one of the most popular websites for the Outer Banks.

With the intent to educate people and show them what NOT to do while driving on the beach, while poking a bit of fun, they encouraged others to share their pictures and soon the word was out about the unbelievable and comical pictures on Facebook’s Oregon Inlet Idiots.

The site states: “Tired of digging people out? Like watching idiots try to pull other idiots out of the sand? Love the sound of other people’s axles breaking out of stupidity? Then this is the page for you!” They’d struck a nerve and the growth was staggering. Within 72 hours of launching the site, they had more followers on their page than any other area-specific Outer Banks website (the Town of Duck was second). 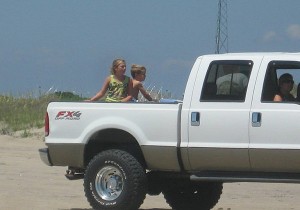 No comment from the Oii guys, but the FB comments were really strong about the dangers of two unsecured kids in the back of a pickup truck.

A couple of the “idiots” have gone so far as to issue threats and inspired the O.I.I.’s founders to remain anonymous. Their response to the few negative comments: “To those who thought our page was funny, until they found a photo of themselves or their vehicle posted here, and decided to blast us, all I can say is lighten up. If you can’t laugh at yourself, then you have a problem.”

Hurricane Irene hit at the end of August 2011 and locals and visitors alike discovered that O.I.I. served as not only a site about funny pictures and beach driving tips, but as an online source for area information. The number of fans swelled enormously and rose again after Hurricane Sandy in 2012. As of press time, their current fans number over 27,000. 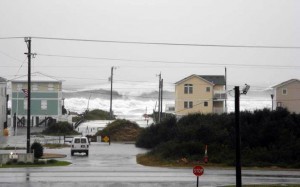 One of many Sandy images from the Oregon Inlet Idiots’ Facebook page.

Admin #1 states, “Without the storms, we’d just be another Facebook page. We were the online Outer Banks gathering place during and after the storms. I stayed online for a 48 hour stretch during Irene—just trying to keep up with all the information that was being shared.”

Admin #1 is grateful for the response the site has generated. “It’s about the ‘Thank yous’ we’ve received. People are so appreciative for the assistance we’ve provided—whether it’s about airing your tires down on the beach or where to find a hot meal after a storm, it’s been a gratifying experience for us.”

As for the fans of Oregon Inlet Idiots, they’re happy to find a place to share a love of the Outer Banks and occasionally laugh at their own idiocy.