A SNAP of a Time 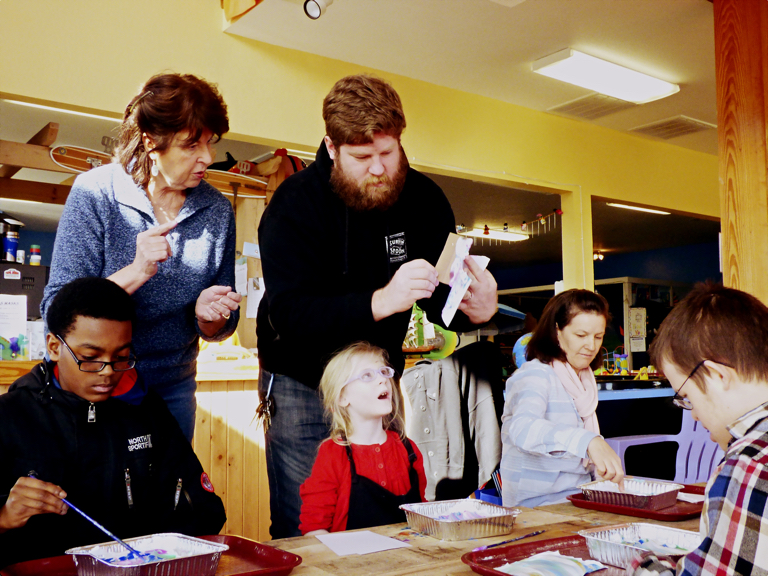 Gwyneth and her dad check out her artwork.

Serendipity is one of those times when everything seems to come together at the right time. When the local SNAP (Special Needs Ability Program) came to the Outer Banks Children at Play on Saturday it seemed like one of those moment of serendipity that occurs so rarely.

What SNAP and the Arts Council created was a series of morning sessions at Children at Play with local artists bringing their ideas to the kids. The program will continue until the summer with parents and artists working together. “We’re going to do four classes this spring, once a month. The fourth Saturday of every month,” Sawin said.

The kids, typically, were thrilled with the toys and props that are so much a part of Children at Play. But when they artist Meghan Sadler brought them to the table to try their hand at art, all the seats were filled.

The art was, if not edible, certainly not harmful. Shaving cream was placed in small boxes in front of the children and they swirled watercolors into the foam. A piece of paper was pressed onto the project and . . . instant art.

For Meghan Sadler, of Local Color, it was a chance to go back to her first love. “I taught middle school for a year, but they couldn’t keep it in the budget for the full year, so I started Local Color,” she said. “It is amazing to come back and do what I was trained for and do something for the community. It was really cool to see.”

It did take a while from the time the endowment was announced until the February 28 event, and some of that was learning what would best suit the needs of the families.

Board member Anne Thomas, a public health consultant, represented the DCAC board and she explains that the parents decided how the program would move forward. “It was just telling them the opportunity that we were given and it organically came about with  them determining what would work best for their kids,” she said.

For Thomas working with SNAP gave her the opportunity to be involved in an area of health that seems to be forgotten at times. “My life long interest is in health. Health is much more than just physical health and this is contributing to the health of the children,” she said.