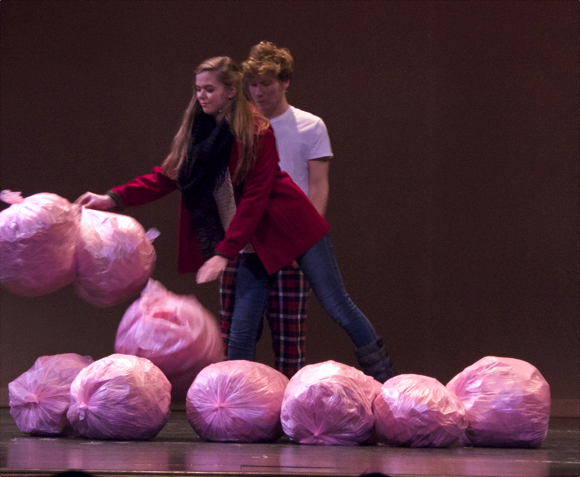 Sometimes it’s nice to be surprised and the First Flight High School production of Almost, Maine this weekend was about as nice a surprise as there could be. Comprised of nine vignettes, all of it taking place in Almost, Maine, a small town that never did seem to get it together enough to be a real town—so it’s almost a town.

Delving into love and relationships in what is often a whimsical yet very real way the play takes an unblinking look at how confusing the human heart can be. First produced in 2008, in the play love is a very tangible thing—a physical manifestation that has substance. Two of the sketches in particular draw attention to the phenomenon.

“In Her Heart” with Christian Davis and Mary Pat Thompson playing the parts, Glory (Mary Pat) pops a tent up on East’s (Christian) front lawn to watch the northern lights and say goodbye to her husband who died three days ago. She carries the broken pieces of her heart in a small red bag, pieces that have hardened and become slate. East, who is a repairman offers to fix it. It is a sweet and wonderful way to begin the play.

For Gayle (Katy Spore) in “Getting it Back”, 11 years of dating is enough and she carries nine bags into Lendall’s (Christian Eberhard) home that was, she believes, all the love he gave her and she’s giving it back. When she asks for her love back, all he can find is a small bag; but inside the bag is a box, with a ring in it. It is, he tells her, the only thing he could find that could hold all the love she had given him.

Not every tale is whimsical. Chloe Williams and Jacob Poli as a married couple whose marriage is failing were brilliant in “Where it Went.”

Maiah Tabb’s portrayal of Hope in the “Story of Hope” was poignant and evocative. The night before she was to leave for college, Man (Kaeley Williams) asked her to marry him and she promised an answer in the morning—a promise she did not keep. Now years later, she knocks at his door and tries to explain how the twists and turns of her life have led her back to his doorstep. And Man, listening to her, says very little, except to tell his wife that the person at the door is just asking for directions.

There is not enough room to call out every outstanding performance, because there was not a weak link to be found. A very satisfying and well-performed weekend of theater on the Outer Banks.

Next up for the First Flight actors—The Drowsy Chaperone-A Musical within a Comedy, April 7-9.